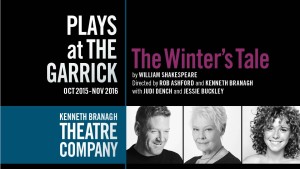 The Winter’s Tale by William Shakespeare, the first offering of Kenneth Branaugh’s Plays at the Garrick, arrived on American movie screens last evening. After an interminable unedited film of the Garrick audience doing nothing but sitting, the production began, the American audience not as well-disposed as it had been forty minutes earlier when the unedited theater-watching began.

Based on Robert Greene’s Pandosto, The Winter’s Tale completes the group of Shakespeare’s late plays Chicago audiences have had the rare treat to experience during the past few years. Together with the Chicago Shakespeare Theater’s magnificent productions of Pericles, King Lear, and The Tempest, Branaugh’s The Winters Take provides a glimpse of what might have been on Shakespeare’s mind as he prepared to leave London, returning home to his small town of Stratford:

The present and future of a sole surviving child, a daughter, is the primary concern; the prospect of having to confront the perpetrators of a grievous, and life-changing betrayal weighs on the mind, a prospect so daunting, that any reconciliation might need a touch of the miraculous.

Branaugh, and Rob Ashford (the director of last spring’s stunning Carousel at the Lyric Opera) have chosen to set the play in a Fanny and Alexander-like Bergmanesque world, on a Victorian theater pop-up stage – 1900s Europe, Christmas, a young son in a sailor suit, a magic lantern slide show – and to reorder a few scenes, edit the line revealing that the Queen has not really been dead for sixteen years, and cast Paulina (Judi Dench) also as the enigmatic key transformative player, Time.

With an all-star cast, including Michael Pennington, whose English Shakespeare Company was the centerpiece of the Chicago International Theatre Festival in the 1980s, one would expect the directorial choices to illuminate the play’s traditional challenges. Instead, Branaugh and Ashford’s The Winter’s Tale leaves the key questions Branaugh raised in his introduction, mostly unanswered.

Significantly, Shakespeare changed a key plot point in his dramatization of Pandosto. Shakespeare’s King does not commit suicide, as he does in Greene’s tragic romance.

Shakespeare, whose plays Greene had dismissed as nothing more than the product of an upstart crow, clearly intends to go home, no matter the problems awaiting him there.

Like Loading...
December 1, 2015 – 8:42 am | By Paul Kuritz | Posted in from Paul, History, Mini-Review, Movies, Theater, Videos | Comments Off on Kenneth Branaugh and Rob Ashford’s THE WINTER’S TALE arrives