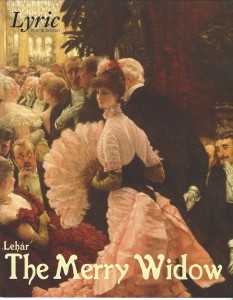 Just about midway through Slovak composer Franz Lehar’s The Merry Widow, the heroine, Hannah Glawari, sings a folk tale which not only reveals her strategy for winning the mating game she’s playing with old beau Count Danilo Danilovich, but also discloses how this beloved chestnut of the musical theater can continue to exert its great power.

Widow Glawari, played with consummate style by Renee Fleming, is hosting a gathering at her Paris estate. Her fellow Poentevedrans have enjoyed their native folk dances and music. Now Hannah takes center stage to sing the old tale of Vilja, a wood maiden:

Once upon a time a hunter caught a glimpse of a mysterious woodland creature known back home in Pontevedro as “Vilja”. He was immediately caught up in her spell and could not take his eyes off of her. He longed for her and sighed ceaselessly, “Oh Vilja what are you doing to me! I’m sick with love! Just take me already! And be my true love.”
The wood maiden, reached out her hand, seducing him into her power. The fellow was helpless as they exchanged heavenly kisses. Sated, Vilja disappeared, leaving her hunter with but one final wave and a lifetime of pining.

Now a widow, Hannah intends to use Vilja’s strategy – the full sensory intoxication of beauty – to capture once and for all in a marriage proposal her childhood sweetheart, the man whose uncle both prevented their marriage and drove her into the arms of an ancient multimillionaire.

The Count, reeling from the heartbreak of seeing his one true love marry another, has thrown himself into the wanton life of “wine, women and song.” Hannah vows to rescue him and rekindled their pure love with a full-court press of beauty – auditory, visual, kinetic, olfactory and gustatory. Her Act II party is her first sortie. In the original libretto , Hannah builds a replica of the risque night spot Maxim’s – Danilo’s “home” – on her estate in Act 3 in order to lure him in. In the latest libretto, Hannah merely tracks the count to the real Maxim’s.

After magically navigating both a series of complications, and a subplot contrasting the “sophisticated” Parisian style of marriage with the honest Pontevedran idea of marriage, Danilo proposes to Hannah. While the Parisian men had sought Hannah when she was wealthy, Danilo, on the other hand, rejected the wealthy Hannah. He proposes only when he discovers that she is, as she once was, penniless. Their marriage can now be built on sacrificial love alone. Then the “Eucatastrophe”: Providence rewards Danilo’s purity of heart by placing the seemingly lost fortune under his control. By seeking first the Kingdom of Heaven, Danilo has found “other things” added to his life.

That strategy is known as “enchantment.”

Through Vilja’s story Hannah created an enchantment: a drama revealing a previously hidden mysterious reality. J.R.R. Tolkien explains that an enchantment story produces “a realism and immediacy beyond the compass of any human mechanism.” If you are present for an Enchantment, “you yourself are, or think that you are, bodily inside…The experience may be very similar to dreaming. An enchantment allows both the designer (Hannah) and audience (Danilo) to experience a “recovery, a regaining of a clear view.” An enchantment ends in Eucatastrophe – a good and joyous conclusion, “a sudden and miraculous grace… never to be counted on to return.”  Joy arises from “a sudden glimpse of the underlying reality or truth” previously hidden or obscured. 1

The triumphant success of the Lyric Opera’s production of The Merry Window is due to director Susan Stroman’s brilliant appropriation of Hannah’s Vilja strategy – enchantment.

Ms. Stroman has drawn the Civic Opera House audience into a masterly full-sensory enchantment. Without realizing it, night after night 3,561 people are mysteriously drawn into a wonderful spell, a dream world, where old verities, truths, hopes, and desires not only still live, but suddenly and joyously triumph against all odds.

Ms. Stroman is a master storyteller, a master enchanter.

And she has two world class performers through  which to weave her spell.

If you’ve ever wondered why Renee Fleming (Hannah) seems to be the face of opera, you’ll wonder no more after experiencing her as the Merry Widow. With Hannah Glawari Ms. Fleming displays no line between role and performer; her movement between speech and song flows effortlessly. Ms. Fleming’s joy in singing drives the enchantment, as her sound can bring unexpected tears of wonder to your eyes.

Who could play a love interest opposite this celebrated diva? Look no further than Thomas Hampson. Think Gary Cooper and Joel McCray. Then add a sense of humor and a full resonant voice and you have a matinee idol for the ages.

Together, Renee Fleming and Thomas Hampson, conjuring images of Vivien Leigh and Clark Gable along the way, are the perfect Hansel-and-Gretel couple to lead a rowdy, cynical contemporary audience into the long ago land of tender and innocent enchantment.

But it is superstar director Susan Stroman who knows the recipe and which ingredients to use. She combines Julian Crouch’s settings, with William Ivey Long’s costumes, and the lighting of Paule Constable and Chris Maravich to elicit gasps of delight.  Sir Andrew Davis’ conducting of the orchestra both drives the action and supports her spellbinding storytelling with great expertise..

Under Ms. Stroman’s world-class stage direction and choreography even the scene change between acts two and three received one of the largest ovations of the evening! And the curtain call itself is a work of art.

In 1905, the two managers of Theater an der Wein didn’t like Lehar’s music and decided to cancel the premiere of The Merry Widow. So captivated by Lehar’s confection were the staff and actors, that they volunteered their time so that the show could go on. After only one rehearsal with musicians before the dress rehearsal, The Merry Widow opened as a smashing success with numerous curtain calls.

The Lyric Opera’s The Merry Widow, through the inspired conjuration of Susan Stroman and the star-studded cast, uncovers the enchantment and mystery that the first cast and crew wanted to save for posterity.

Like Loading...
November 26, 2015 – 12:44 am | By Paul Kuritz | Posted in from Paul, History, Men and Women, Music, Opera, Quotations, The Gospel of the Kingdom, Theater, Theology, Uncategorized | Comments Off on Lyric Opera’s The Merry Widow: ENCHANTMENT