VANYA ON THE PLAINS: A HYMN TO THE HUMAN HEART 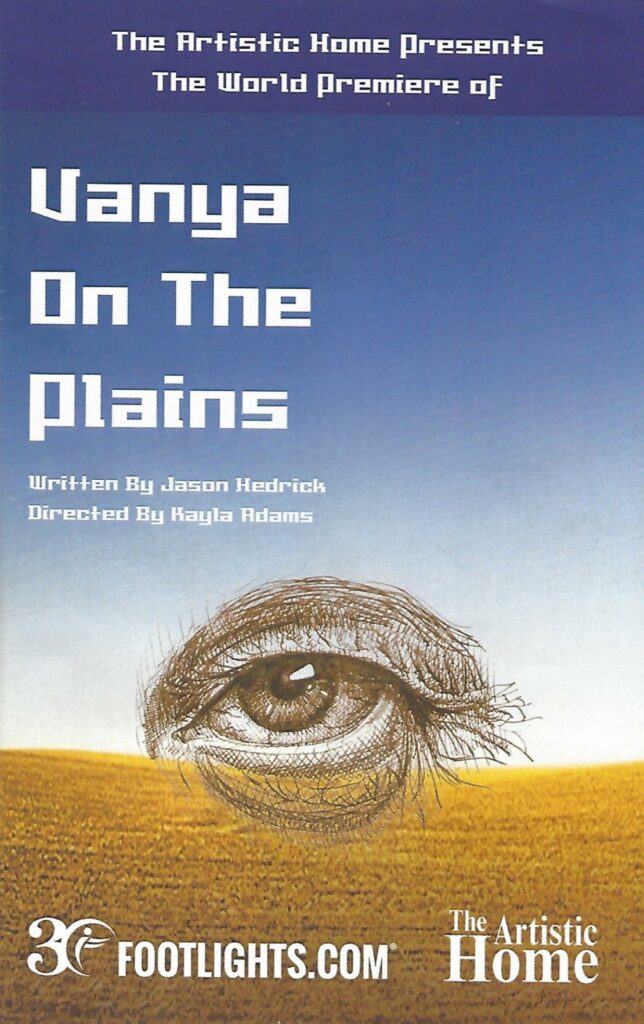 Dr. Astrov: I wonder if the people who live one or two hundred  years from now would remember us with a kind word.

Marina:  The people won’t remember us, but God will.

Dr.Astrov: Thank you for that . That was well said.

One hundred and twenty years later, Chicago’s wonderous Artistic Home Theater presents the premiere of Jason Hedrick’s look at the dystopian America of the not-too-distant future, where books are a rarity, and the knowledge of a thing called drama is all but lost. In Vanya on the Plains one man, seventy something Elijah, a Content Manager in the future, remembers that scene from Chekhov’s play.

In 1899 there was still a remnant of moral sanity.  The foundational Orthodox Church allowed for human sympathy, and brotherliness . Consequently, while Chekhov’s people may suffer, they do not break. The hope provided by their faith preserved their humanity. They aspired: They must live. They shall live.

Whereas in Chekhov’s world humans dream, hope, try to understand, and struggle  against hopelessness and bitterness, Hendrick’s brave new-worlders can instantly live any virtual dream, or escape, chemically, any approaching hopelessness.

The people Elijah observes are isolated, one from another, lost in their own minds, blocked and baffled. God has been replaced by drugs and technology. No one is adequate for the grim situation in which they find themselves.

Elijah’s original namesake, the prophet Elijah, called upon his God to deliver his people from the evil oppression of their times. But centuries later, all that remains of the great Orthodox Christian faith which sustained Chekhov’s world are the names which hang on the family members like mysterious tattoos from an alien past – Elijah;  Anka (little Saint Anna) the mother of the Theotokos; Sophia, the Wisdom of God, the daughter of Anna; Nicholas, the son of Saint Anna, now an ironic reminder of St. Nicholas the Wonderworker.  Elijah is the only character whose life reflects his name. Elijah (the Lord’s strength), settled in the wilderness and spent his whole life in strict fasting, meditation and prayer. Called to prophetic service, which put him in conflict with the secular state, the prophet became a fiery zealot of true faith and piety.

Hedrick’s Elijah, with no knowledge of God, calls upon the only power he knows greater than himself and his demented times, the dramatic theater, to deliver his people. If not his people, then at least his family.

The overpowering and suffocating technology of his time has isolated Elijah from his family. As Elijah was also  the prophet whose return would signal the End of Days, in Mr. Hedrick’s play, his Elijah, sensing  the approaching of his own end times, seeks to employ the only force which has sustained him through the years – his memory of a Chekhov play. He hopes the work on the play will bridge the gap between the generations, between the vital humanity for which they were all created,  and the non-human savagery with which his family flirts

But the art of theater and drama is a lost art. No one remembers what it was, or how it was done. Elijah sets off to reconstruct the art of the theater, much as the Renaissance Italians did with the Greek and Roman drama, they discovered following the fall of Constantinople. He believes that as his family grows in their skill as actors, they correspondingly will grow in their humanity, developing honest and real social skills of direct interpersonal communication

Elijah has held Chekhov’s great play in his mind and heart.  He prays that the play’s virtues are transferrable, that it can save his family from the dark forces overwhelming all of humanity. In a world bereft of books (no one  owns them because no one can understand them), Elijah clings to a poem by William Carlos Williams, “To Elsie”. The poem serves both as  Elijah’s mantric inner monologue and a poetic summary of the psychic state of the world.

Like a typical Chekhov character, Elijah often cries. But with more reason than the people of Chekhov’s world. The human failings, unkindnesses, insensitivities, absurdities, selfishnesses, unhappinesses, are still everywhere. But Hedrick’s characters, unlike those of Chekhov’s,  have no Christian faith. The world of the Plains is a spiritual graveyard. The power of the spirit to lift and animate is no where to be seen. Hendrick’s characters are slowly being reduced to a mute state, as they seek escape in powerful mind-altering drugs and seductive alternative virtual realities.

Can the theater save the day? It is Elijah’s birthday wish.

Will the rehearsal and performance awaken his sleep-walking daughter and her children from their toxic addictive daydreams?

When one actor listens to another, on a stage, in front of an audience, that audience is aware that there is a connection being made. And maybe they lean in … and they think about the connections they have made with the people they love, or are falling in love with. It is a very small thing. A very powerful thing. It‘s hard for me to explain … but, maybe we could make something like that happen

Can the theater lead his family out of the morass of the twenty-first century to glimpse the better world offered by Chekhov?

Gayle, the  cynical elderly matriarch of the Storm Estate, lends her son-in-law Elijah a hand. She claims to be the only one around who knows plays.

Miraculously the characters do change as they rehearse. Elijah’s hopes are realized by the play’s conclusion. Even the boozy Gayle has begun to allow her a core of sentiment to penetrate her thick shell of cynicism.

At the end Elijah tells his daughter, and indirectly the audience, what to do to save themselves:

Like your whole head has been taken oﬀ, my dear.

The powers inherent in Mr. Hedrick’s play could only be unlocked by a theater company like The Artistic Home.

Once all theater companies were led by an actor-manager. A star actor who would stage some of the plays, act in other of the plays, and teach the novices the art of the theater. Names like Richard Burbage, Edward Allyn, Moliere, William Macready, Henry Irving, Constantin Stanislavski, Sarah Bernhardt, and Laurence Olivier fill the historic annals of the great theater practitioners. In fact, the actor-manager Lewis Hallam brought his company to America to introduce theatre to our nation.

The last great actor-manager was Eva Le Gallienne (1899 – 1991)  who cofounded the Civic Repertory Theatre on New York’s West 14th Street, directed classics and new plays alike, acted when she felt like it, and trained generations of young actors.

Chicago has the last of the important actor-managers in the person of Kathy Scambiaterra. After founding a theater company of artistic associates and establishing a training school based on the finest acting technique known to man, she has, for twenty years, staged, acted and trained in the great actor-manager tradition.

And the results are among the finest productions you may see. Personally, I have seen an unsurpassed Seagull, and a harrowingly beautiful By the Bog of Cats before this amazing production.

Ms. Scambiaterra‘s success is due to the fact that she surrounds herself with the most talented of associates. Everyone , from the stage manager, to the cameoed walk-on,  is an artist worthy of the word.

And Ms. Scambiaterra is an extraordinary actress.  Her final monologue as Gayle is simply thrilling, as it leads the audience through the gamut of emotions, reflecting on the nature of human destiny and the art of the theater.

Her company for this production is, again, first rate. Frank Nall’s gentle everyman Elijah sets the beautiful Chekhovian tone and displays the actor’s great versatility when compared to the degenerate Xavier Cassidy he played in By the Bog of Cats. Displaying equal versatility is Brookelyn Hebert’s wild animal Caprice, a far-cry from her delicate heart-breaking Nina of The Seagull. The ability to give excellent actors a recurring home in which to play a variety of roles is an important reason for The Artistic  Home’s stunning successes.

On the other side of the coin, the theater brings in fresh blood and marinates it in the company’s strong and life-affirming ensemble tradition. Kathryn Schwartz’s Anka subtly changes from automaton to daughter. The Sophia of talented young Ariana Lopez belies her youth. Mark  Pracht finds all the humor and pathos in Carl as he transforms from living tree trunk into  a virile hero. And as the generation’s Vanya known as Nicolas, Ben Zarbock ‘s physical comedy lends pathos to his emerging humanitarian heroism. Eric Simon’s Barry gives interesting life to a character so flat on the page. All the rest are stellar as well. You must see them all to believe.

Kayla Adams has directed the play with tasteful character dynamics, and an unfailing sense of effective theatricality. Kevin Hagan’s simple, but effective, stage design suggests the world in which Chekhov lived and to which Elijah wishes to return. Cleverly, he has changed the Chekhovian saintly household icon on the back wall, to  a framed photograph of Elijah’s contemporary icon, the writer. Zachery Wagner’s costumes, as with By the Bog of Cats, display wonderful imagination and character revelation.

Like Uncle Vanya, , Vanya on the Plains celebrates the triumph of the human heart over adversity.  The plays share the belief of William Faulkner

that man will not merely endure he will prevail. He is immortal, not because he alone among creatures has an inexhaustible voice, but because he has a soul, a spirit capable of compassion and sacrifice and endurance. The poet’s, the writer’s, duty is to write about these things. It is his privilege to help man endure by lifting his heart, by reminding him of the courage and honor and hope and pride and compassion and pity and sacrifice which have been the glory of his past. The poet’s voice need not merely be the record of man, it can be one of the props, the pillars to help him endure and prevail.”[i]

To see Vanya of the Plains, is to be reminded that the theater does not change society wholesale through rallying agitprop plays, but retail, one heart at a time. As Shelly notes:

The highest moral purpose aimed at in the highest species of the drama, is the teaching the human heart, through its sympathies and antipathies, the knowledge of itself