THE HEIR APPARENT: A Matter of Style 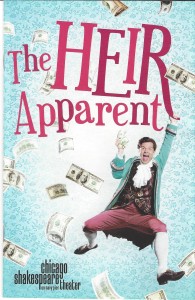 Americans have always had a problem with affectation.

Our first comedy, Royal Tyler’s The Contrast (1787), draws a sharp distinction between the emerging American style of Colonel Henry Manly and his pal Jonathan, and the Britisher, Mr. Billy Dimple and his servant, Jessamy, while acknowledging the bedrock importance of matters of style – national, ethnic, economic, social, et al – in both realizing the broad range of world dramatic literature and mining pure comic gold in performance.

Today the most elementary texts introducing the art of the theater, and the theater’s subsidiary arts – playwriting, directing, acting, design – articulate the importance of style in creating theatrical works from beyond our contemporary milieu.

Americans have even taken to the streets over matters of style.

In 1849 twenty five theater-goers lay dead and 120 others were injured after the Manhattan militia broke up a street battle between fans of the American matinee idol Edwin Forrest and fans of the British stage king, William Charles Macready. The dispute was over the matter of style – whose style was best for the playing of Shakespeare.

The same debate arose in the 1960s with the creation of the  Repertory Theatre of Lincoln Center  .

The original artistic leadership boasted the best America had to offer: Elia Kazan and Robert Whitehead, with Harold Clurman providing dramaturgical assistance. The playwright-in-residence was Arthur Miller, who premiered his new play After the Fall with company members Jason Robards and Barbara Loden in the leading roles, in rep with his Incident at Vichy, designed by Boris Aronson, O’Neill’s Marco Millions, Middleton’s The Changeling, Moliere’s Tartuffe, and S.N Berman’s new play But for Whom Charlie. In 1962, a training program for actors was instituted under the supervision of Group Theatre alumnus, Robert Lewis.

After just one season the verdict was clear: The productions all looked and sounded the same. The leadership had no sense of style in period stage production. They had to go.

The handwriting was on the wall earlier when the Lincoln Center administration rejected Kazan’s recommendation that Lee Strasberg lead the new Drama Division of the Julliard School. Strasberg had come to represent the style associated with the Actor’s Studio and the kitchen-sink American realism in which it flourished.

Which leads us to the Chicago Shakespeare Theater’s The Heir Apparent. Aside from actor Paxton Whitehead’s natural accent, designer Kevin Depinet’s setting, and David Woolard’s costumes, matters of style in this 18th century French farce, Le Legataire universel, seem to have been given a pass, even by the playwright/translator/adapter, David Ives.

Nevertheless, since “style is what you end up with, not something for which you strive, ” 1 the production does have a style:

Imagine the Red Skelton Show, a television staple between 1951 and 1971, doing an extended sketch about the eighteenth century. The result would be what I call the “whatever” style.

Like Loading...
December 5, 2015 – 9:41 am | By Paul Kuritz | Posted in Books, from Paul, History, Quotations, Theater, Uncategorized | Comments Off on THE HEIR APPARENT: A Matter of Style