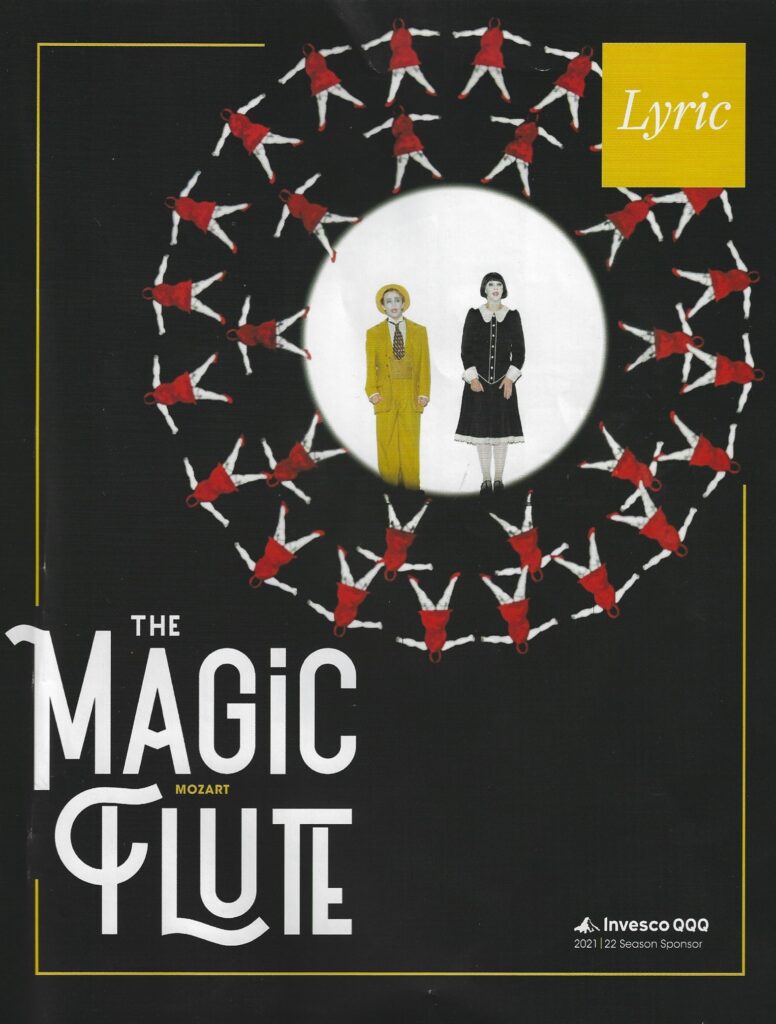 The city’s German population was very enthusiastic, but the rest of the cultured class seemed indifferent to what Tribune music critic George P. Upton called, “the first German thoroughly-equipped opera troupe.” The production’s Sarastro was Karl Johann Formes( 1825-1889), a respected German bass who had debuted as Sarastro in Cologne. The Tribune critic didn’t much like the story:

“Much of the plot is a farrago of crazy nonsense. Characters are introduced, but where they come from, where they are going to, what they are on the stage for, or what manner of persons they are might well puzzle the most astute to discover. There is neither unity, wit, nor sense in it. It might well be the ragged edges of one of Schikaneder’s nightmares, and to this stuff Mozart was to set music.

“The opera was well cast, except that it was Hamlet with Hamlet left out. The Queen of the Night, a prominent part, was omitted, from the fact, probably, that there was no one in the troupe able to cope with it.”[i]

History would record that performance as a failure.

The newest Magic Flute to play in Chicago is also a failure. But for different reasons.

How, you might well ask,  could you call a production which has played nearly ten years and appeared in 35 different cities, a failure?

The famous American acting teacher Sanford Meisner once wisely remarked that, “ Life beats down and crushes our souls. And the theatre reminds us that we have one.”

The Kosky Magic Flute seems designed to crush our souls even more and to deny, with glee, the existence of anything but egotistical power. It is a dark celebration of nihilism, certainly not Mozart’s celebration of human love in all its dimensions

The deliberate undermining of the operatic treasures of Western Civilization seemed to begin shortly after World War 1. Michael Walsh chronicles the tale:

Seizing the high ground of academe and the arts, the new nihilists set bout dissolving the bedrock of the country, from patriotism to marriage to the family to military service.”[ii]

A militant cadre of stage directors have  offered “new interpretations” of the opera canon. Faust and Mefistofole are the most obvious examples. Instead of upholding Christian notion of a loving God and salvation available to all men, the “new” interpretations celebrate Satan and debunk the faith and mock Christians.

These productions center around a “concept”. The concept for the Lyric’s Magic Flute is presented in the program in four pages devoted to Kosky and his collaborators. (The program offers not a single word about Wolfgang Amadeus Mozart, alerting the reader that Mozart is irrelevant to this event. It is all about that clever boy Kosky.)

The “concept” sees the Magic Flute as a silent movie. Why? He doesn’t say, or seem to care. But it is a silent movie in which people can, for some reason sing. (“Leftists are fueled by a belief that in the modern world, it does not so much matter what the facts are, as long as the story is well told.”[iii]) Why can the actors sing but not speak? Logic and reason are also the enemies of the regie directors – logic ruthlessly oppresses the irrational. When Papageno is punished by a padlock on his lips to prevent him from speaking, there is no padlock. Indeed, were we the only ones who noticed that he hadn’t been speaking, so a padlock would be unnecessary? Instead Papageno’s lips magically float away, due to the power of the Three Ladies, who traditionally slay the dragon chasing Tamino with their spears. In Kosky’s production hundreds of cartoon arrows slay the dragon, instead.

Kosky’s silent movie is actually a lengthy ghoulish cartoon infested by a blizzard of insects which fill the screen for no dramatic reason. (Perhaps Lyric Opera hoped that the cartoon would introduce a new generation of cartoon lovers to grand opera the way director Chuck Jones’ three Looney Tunes shorts -. ‘The Long-Haired Hare’, ‘The Rabbit of Seville’ and ‘What’s Opera Doc’ did in the 1950s)

The illogic of nihilism continues: Papageno, the bird catcher, has no birds, just a black cat. When Tamino says that Pamina is beautiful he is usually given a picture upon which to basis his opinion.. (Tradition is also the enemy of nihilism.) To give  Tamino a source of protection in his journey, he does not receive a wooden flute carved by Pamina’s father, but rather a cartoon moth. Papageno is not given the traditional glockenspiel, but rather a sextet of plump cartoon acrobats The Queen of the Night appears, not as one who could conceivably be the mother of a beautiful princess, but as a giant ugly spider.

The three boys in the opera are real, not cartoons; but they are seen and heard to sing, but, for some reason, their mouths never move. The Great Sarastro and his arias,  which Bernard Shaw said were the only music ever composed that was suitable for the voice of God,  are given by a seedy old geezer who seems a dead-ringer for director John Ford’s brother, Francis, known for playing town drunkards, as he did as Boone in Young Mister Lincoln. The priests of the temple are in no way related to the Masons as is traditional. At Mozart’s time the Masons were considered a beneficial organization, upholding morality and personal responsibility .This positive view continued at least  to the time of  Leo Tolstoy who gave the Masons the honor of saving his hero, Pierre Bezuhov. Mr. Kosky wants to show the priesthood as hypocritical, a façade of goodness covering their corrupt and diabolical lives. The priests are costumed as the Parisian flaneurs of Degas’ paintings, known as protectors, who housed and cared for the young ballet dancers, like “Little Dancer of Fourteen Years”, in order to have their way with them in private. In one of the creepiest moments of the creepy production, the chorus of protector-priests slowly surround Tamina to ogle her as she changes her clothing.

For Mr. Kosky and his fellow Nihilist directors there is no such thing as good and evil, black and white, All the world.is dark and perverse.

In fact, he seems to be using Mozart’s Magic Flute as a symbol of Western Civilization. The beloved opera is dying and rotting, the pale faced lifeless characters are corpses, attracting insects, under the direction of the Lord of the Flies himself. Whatever joy exists, and there’s is very little in this dour production, seems to be for the end of Western civilization.

The final chorus is sung as ironic by Stepford-like clones of Pamina and Tamino, suggesting that the true function of the Temple, and by extension, of Western Civilization, is to eradicate individuality and  instill conformity:

Hail to you on your consecration!
You have penetrated the night,
thanks be given to you,
Osiris, thanks to you, Isis!
Strength has triumphed, rewarding
beauty and wisdom with an everlasting crown!

Conductor Karen Kamensek led a vigorous and full-blooded overture, but then settled into keeping the music in sync with the ever-rolling film, which dictated the tempo-rhythm of the entire production. The actors were, most of the time, mere heads with cartoon body parts, trying to keep in sync with the video filling the stage, but invisible to the performers.

I would like to see these singing actors in a real opera, where their full humanity could come to play.

In the lengthy program feature, one reads

“Kosky went backstage and asked the company [the performance art group  1927] to participate [in his forthcoming Magic Flute}. The group answered,

So, if you know nothing, this is the perfect Magic Flute for you.

[ii] Michael Walsh. The Devil’s Pleasure Palace. The Cult of Critical Theory and the Subversion of the West. Encounter Books, 2017.

Since  it opened its doors in 1889 Chicago’s Auditorium Theatre has heard the world’s  great voices, in words, in music, and in both. On Wednesday, the eighty year old  Nobel Prize-winning Bob Dylan offered an inspired  concert which placed him in that pantheon of voices. Dylan opened the concert with 1971’s “Watching the River Flow”, […]

In the early 1970s countless undergraduate and graduate stage directing students had the “happy idea” of setting Shakespeare’s As You Like It in a then new and en vogue  Back-to-Nature commune,  populated mostly by trust fund baby revolutionaries fleeing Richard Nixon’s America. Arden was a Vermont ashram, the center of the American counterculture, home to […]

MODEST MUSSORGSKY HAS HIS DAY: BORIS GODUNOV DONE HIS WAY

Exactly one hundred and fifty years since Mussorgsky’s opera Boris Godunov was rejected for performance by Russia’s Mariinsky Theatre his version of his opera is staged and transmitted live to hundreds of thousands of spectators around the world. Modest Mussorgsky (1839-1881) came from a more or less peasant family in Russia. That fact, plus his […]

Take Some ELIXIR OF LOVE For The Covid Blues

An aftermath of the Covid-19 pandemic is that many people can’t seem to shake a feeling of anxiety,  worry, even fear. Theater and music, at their best, have risen to such occasions, to proclaim the opposite message: Life is a joyous gift from God. Don’t be afraid. What good is sitting alone in your room…. […]