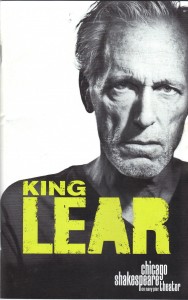 America’s premiere literary critic, Harold Bloom, says that Shakespeare’s King Lear “transcends the limits of literature” He adds that,”I have attended many stagings of King Lear and invariably have regretted being there. Our directors and actors are defeated by this play.”1

While I have not experienced as many King Lears as Mr. Bloom, I have seen several. My first, and only live, King Lear featured Lee J. Cobb at Lincoln Center. Since then, I have appreciated film renderings by Paul Scofield, Laurence Olivier, and Ian McKellan.

Perhaps, I thought, the role of Lear transcends the ability of any actor.

Then I went to see Barbara Gaines’ production of King Lear at the Chicago Shakespeare Theater featuring Larry Yando as King Lear. In the announcement of the play, and in the lead up to the production, Chicagoans “ooed” and “aahed” at the idea that Larry Yando would be playing King Lear. As a newcomer to Chicago, I had never heard of, nor had I seen, Mr. Yando.

What was the fuss?

The lion’s share of the heavy lifting is done by Larry Yando.

How to explain Mr. Yando? Trust me: Up to now you have seen actors who have acted with only 75% of their acting equipment – voice, face, limbs, imagination, emotion, soul, and spirit. This will become clear to you as you witness Mr. Yando play King Lear; you will see in his work, finally, the 25% the other actors didn’t use.

Mr. Yando seems to be able to create any sound, perform any movement, justify any line or action with breath-taking freshness, and breathe new life into the most common actions or too familiar phrases. If Mr. Yando were an athlete, he would lead in league in all scoring categories. In addition, (and this is truly remarkable), he would lead the league in assists, because Mr. Yando is the most generous of actors. It seems that whatever he does just happens to allow the actors around him to “score” as well. Mr. Yando makes his fellow actors play better.

Ms. Gaines said that she believed Lear to be suffering from dementia. She also found a particular Frank Sinatra rendition of Sundgaard and Wilder’s “Where Do You Go?” relevant to her consideration of Shakespeare’s play. So I approached my first Barbara Gaines’ production hoping for the best, but prepared that I might find Shakespeare’s transcendent drama reduced to a Lifetime Television soap opera about an old man spinning LPs in a nursing home.

However, it turns out, I had nothing to fear.

Not only did Ms. Gaines’ ideas not diminish Shakespeare’s play, her insights actually identified a facet of this diamond of a play which illuminated the entire work as I had never seen it before. The play in her production glimmered and sparkled as a newly minted gem. I could hardly believe that this was the same play I had studied and seen before. In 1962, the Polish Stalinist Jan Kott excited people with his book, Shakespeare Our Contemporary. On Navy Pier, no reading is necessary. We can actually meet Shakespeare our contemporary in a production as clear, modern, funny, inspiring, and profound as it must have been for its original audience on St. Stephen’s Day 1604.

The Chicago Shakespeare King Lear has some fine performances besides that of Mr. Yando. Kevin Gudhal‘s Kent could play linebacker with the Bears and recite poetry to bring the hardest heart to tears; he brings a too rare combination of manliness and tenderness to the stage. Ross Lehman’s Fool is captivating. He seems the kind of odd duck one might meet in the stacks of the Newberry Library making esoteric jokes only he and the dust balls understand. But with Lear he makes not only his dear friend happy, but takes all of us watching through a roller coaster of emotions. Finally, the half-brothers Edgar (Steve Haggard) and Edmund (played wonderfully by understudy Michael Silberblatt) find freshness in a sibling rivalry which dates from Isaac and Ishmael, and Jacob and Esau. Each actor has the remarkable ability to coin their lines as if fresh thoughts, and to give their well-worn lines imaginative readings and intentions.

Ms. Gaines’ King Lear revives a puzzlement I have had with the play. Why doesn’t Cordelia just humor her father, and tell the old doofuss that she loves him? What harm would it do? It obviously means a lot to the old man, so why not play along.

But no. Cordelia is clearly her father’s linguistic daughter. Lear cherishes words; that is why he demands hearing them at this occasion. Cordelia, his daughter, has inherited her father’s passion for words. That is why she won’t throw them about willy-nilly.

So this tragedy, in my opinion, is the result of both Lear and Cordelia valuing language too much. (Ironic that this should occur with the playwright most famous for language! “Words,” wrote Hobbes, within living memory of Shakespeare, “are the money of fools.”) Perhaps Shakespeare wanted to underscore the idea that actions speak love louder than words, the very lesson Christ gave in the parable of the two sons (Matthew 21:28-32). One brother says he won’t help, then does, while the other one says said he will, but doesn’t.

If this is what Shakespeare had in mind, then it behooves a production of King Lear to contain a Cordelia who radiates love for her father in every possible way – intonation, gesture, facial expression, etc. We should know without question that, from the depth of her being, Cordelia loves her father more than do her Cinderella-like sisters.

The puzzlement in Ms. Gaines’ production is that Cordelia doesn’t seem to exude this love for her father. In fact, it is hard to tell what this Cordelia thinks of him or why she behaves as she does. She comes across worse than her sisters: an indifferent daughter without even the courtesy to humor her father.

Nevertheless, the Chicago Shakespeare Theater’s King Lear encases this modern reading with the most contemporary of scenic and technological designs. The result: beautiful tableaux and sculptures which, when moving, offer almost balletic renderings of the drama’s dynamics. For example, the moment Lear’s mind seems to snap presents an homage to Buster Keaton’s Steamboat Bill Jr.: the façade of Lear’s life literally falls all around his feet, revealing the Dali-esque barren desert of his mental life. Mark Bailey’s fabulous sets and costumes, Michael Gend’s light which reveals interiors as well as exteriors, and Lindsay Jones’ breathtaking original music and sound design, wonderfully capture Ms. Gaines’ vision of Shakespeare to the delight of the often jaw-dropping audience.

Ms. Gaines concludes her wrenching production with Lear’s last lines. It is a wonderful decision which creates a powerfully poignent coda for the piece. Father Stephen Freeman has said, “What is most lacking in our modern culture is a proper sense of tragedy.”2 Shakespeare’s King Lear, thanks to the gifted artists gathered on Navy Pier, have lovingly created that proper harrowing sense.

So, if Harold Bloom doesn’t want to regret attending a production of King Lear, and wants to see a director triumph with the play, let him come to Chicago’s Navy Pier, and the Chicago Shakespeare Theater.

Like Loading...
September 26, 2014 – 6:25 pm | By Paul Kuritz | Posted in from Paul, The Gospel of the Kingdom, Theater, Theology, Uncategorized | Comments Off on KING LEAR: Shakespeare Our Contemporary