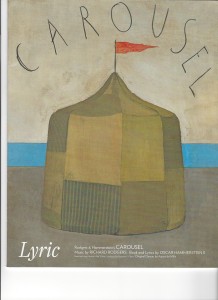 Throughout theater history a director’s re-imaging of a stage classic changes forever how a play is considered. In mid twentieth century Peter Brook’s productions of Shakespeare changed King Lear and A Midsummer Night’s Dream.

So before reading on, stop and order your tickets. It is not just a brilliant production of a great musical. It is an historic event.

Press releases have focused on the relocation of the musical’s time period from the gay 90s to the 1930s. But that is the least of the amazing features of Mr. Ashford’s conception.

It begins immediately with the famous Carousel Waltz which opens the proceedings in lieu of an overture. Mr. Ashford uses the occasion to present his stark vision of the play’s central metaphor, hidden in plain sight: Life is like a carousel: endless repetitions of addictive ups and heart-breaking downs, and no getting off until the ride ends. This carousel is not a jolly state fair amusement; rather it is one of Dante’s circles of hell in which all but a few are trapped. This carousel comes from the pain of Jacques Brel’s nightmare song On a Carousel:

As the Carousel Waltz plays, the carnival workers slowly enter, led by the Mistress of Ceremonies Mrs. Mullin (the multi-talented Charlotte D’Amboise), the soulless mate of Kandor and Ebb’s equally soulless Cabaret Emcee. The workers assemble a carousel of death, featuring not brightly painted show horses and mirrors, but the pale lifeless horses of Revelation’s Apocalypse.

Behind them come the townsfolk in zombie-like lockstep, lemmings mysteriously drawn to the promises of the cliff. The scene suggests Breughel’s Triumph of Death if set in Germany’s decadent Weimar Republic.

The barker, stud bad-boy Billy Bigelow (Steven Pasquale) casually interacts with the quiet, shy, plain –Jane Julie (Laura Osnes) as the red of their costumes seems to draw them inexorably closer and closer, as the carousel spins them into one another’s arms.

The next scene of Paolo Ventura’s amazing scenic design exists under three blooming apple trees. Julie and Billy have become the Adam and Eve of the play. Their fallen Eden is nothing more than rocky ruins. Nevertheless, they choose one another over their previous lives, with nothing in their future but one another. Laura Osnes’ remarkable Julie is not a dreamer; her Julie is determined to connect with the one person she believes shares her history of pain. Her If I Loved You is not a song of hope. She sings it straight into Billy’s eyes, as if reading him as no one ever has before. Billy is seduced, not by her physical appearance, but by her uncanny ability to see into his soul. The seemingly painful histories of both Billy and Julie prevent them from declaring their love. Their fractured lives must be conditional.

Carousel is a musical organized through contrasts. To contrast with the impulsive and passionate Billy and Julie, we are introduced to Julie’s best friend Carrie ( the dynamic Jenn Gambatese) and her fiancé, Enoch Snow (Matthew Hydzik). Not a comic cartoon, this Mr. Snow is a responsible and thoughtful fisherman who, unlike Billy, knows that dreams must have plans to make them a reality. Carrie and Enoch have no trouble declaring their love for one another; no conditions here.

Nettie Fowler’s Spa is here a Hotel where the townspeople gather for celebrations and major events. In contrast to Mrs. Mullin, Nettie (the heavenly-voiced Denyce Graves) champions the life-affirming cyclical nature of their lives: “this year is jest like every other.” The  annual clambake and treasure hunt are celebrations of community, a feature of June, which, like the mating urge, is breaking out all over. Even with Julie and Billy.

Billy’s discovery of his impending fatherhood prompts the challenging Soliloquy, the first song Rogers and Hammerstein wrote for the show. Mr. Pasquale’s interpretation is not only glorious to hear, but his acting shows how the love for a child can perpetuate family cycles of pain and frustration. Mr. Pasquale’s Billy loves the idea of fatherhood so much that he heroically vows to care for his daughter no matter what it takes, even stealing. And if he can’t get it, he vows to die.

In good drama every prophecy comes true. And Carousel is a great drama.

Unemployed and not a community kind of guy, Billy and his friend, the archetypal bad influence Jigger Craigin (Jarrod Emick) plan to sneak off to rob a rich merchant. But before they leave, Jigger manages to fondle Carrie, cause the breakup of her engagement to Enoch, and lead the picnickers in a hymn to bad advice:

There’s nothing so bad fer a woman
As a man who thinks he’s good!

And salutes the source of his wrong-headed philosophy:

My mother used to say to me:
“When you grow up son, my son,
I hope you’re a bum like yet father was,
‘Cause a good man ain’t no fun.

By this time in Mr. Ashford’s Carousel the nature of his carousel symbol has become clear. “Carousel” comes from garoso: quarrelsome, contentious, and gara: quarrel, strife. Those trapped in the carousel life’s cycles struggle both within themselves and with others. It is the epic struggle between light and darkness, good and evil, Mrs. Mullin versus Nettie Fowler, the wisdom of the world versus the Kingdom of God.

Surrounded by police, his attempted robbery a failure, Billy betrays his wife and daughter by committing suicide, like Judas. (After stabbing himself, he falls off the roof to the ground in slow motion!) Billy awakes to find himself in the Kingdom of God, waiting in what Dante might call Purgatory.

Meanwhile, a devastated Julie cradles his body, as the Captain assures her that the “good Lord will help him now, ma’am”, and as Julie agrees with Carrie that she is better off now away from Billy’s carousel influence.

Alone with his body, she reveals the source of Billy’s attraction to her: “I always knew everythin’ you were thinkin”. Free from any possibility of more pain from the relationship, Julie finally admits: “I love you”.

Nettie arrives to comfort her and to begin to lead her out of her deadly life cycle. She reminds Julie of what “we used to sing”: You Never Walk Alone. The truth of the Christian faith, lost in the passions of Mrs. Mullin’s carousel world wisdom, is proclaimed: God is everywhere present and fills all things.

Stubborn and unrepentant, Billy, after learning that he has a daughter, changes his mind, and asks Starkeeper/God (Tony Roberts with a wonderfully simple, but profound interpretation) if he might go to earth to help her. On earth, with a stolen star, Billy sees Louise (Abigail Simon) making the same mistakes he made in his life. In a brilliant piece of choreography, Mr. Ashford stages Ballet: Billy Makes a Journey to reiterate the themes he has been playing with throughout the production. Billy’s daughter is of course the center, along with the mean Snow children. But choreoprapher Ashford has Billy arrive followed by a younger version of himself, literally walking in Billy’s footsteps toward Julie. Along with the young Barker, Mr. Ashford brings on a black leather-clad Mrs. Mullin atop the pieces of a carousel. She seeks to reestablish the carousel in Louise’s young life, to repeat the tragic story of Billy and Julie with the next generation. Watching, Billy realizes the nature of the life he had led and determines to save Louise from her parents’ lives. Billy, holding the light of a “stolen” star, rescues Julie, and scatters the carnival in a thrilling theatrical Harrowing of Hell.

A transformed Julie enters. As played by Laura Osnes, she has more presence and confidence than ever before. Clearly life without Billy, life under the guidance of Nellie Fowler, has been good for her. Julie looks for the man (Billy) who had frightened her daughter. She sees Billy momentarily, but finds the star-light Billy left on Julie’s graduation chair. She takes the light and holds it at her breast, in a mysterious connection with the unseeable Billy, who, after death, is free to declare the love he feared to mention in life.

At Louise’s graduation, Louise, Billy, and Julie hear the graduation speech/song given by the town doctor (God in disguise) : God is everywhere present and fills all things, so keep this faith with courage. Billy, an unknowing agent of God, having vanquished the carousel hell, now blesses both his daughter, (urging her to believe the hymn’s message) , and his wife, (whispering to her that he always loved her).

Mr. Ashford has assembled one of the strongest casts and most imaginative set of designers I can recall seeing in a musical play. Everyone merits accolades, but Steven Pasquale stands out simply because of the nature of the role and music he mastered. Billy Bigelow is the musical theater’s most famous anti-hero, selfish and full-of contradictions. Mr. Pasquale somehow enables us not only to understand this tricky character, but to, believe it or not, sympathize with him! He acts and sings T. S. Eliot’s’ remark into a living reality: “Music heard so deeply that it is not heard at all, but you are the music while the music lasts.”

Conductor David Chase has made familiar music sound new and fresh. For example, his slow tempo of You’ll Never Walk Alone – more a beseeching prayer, than a crusade march– in the potent dramatic situation Mr. Ashford’s actors created on stage, made 3,563 people forget they had ever heard the song before, as they stifled sobs successfully and unsuccessfully.

Mr. Ashford, his designers, his amazing actors, and the grand Lyric chorus have shown Carousel to be a story of spiritual warfare, as the light of the Kingdom of God seeks to break into and overthrow the Present Evil Age. Mr Ashford’s Carousel is a  theatrically thrilling and non-preachy important work of high art. In it can be seen the wisdom of Archimandrite Meletico: “We can only encounter God in the present moment; whenever we live in the past or in the future, we place ourselves beyond His reach.” 1

Like Loading...
April 17, 2015 – 1:18 pm | By Paul Kuritz | Posted in from Paul, Music, Television, The Gospel of the Kingdom, Theology | Comments Off on ROB ASHFORD’S CAROUSEL: An Historic Reinterpretation