PERICLES: “What pageantry, what feats, what shows!” 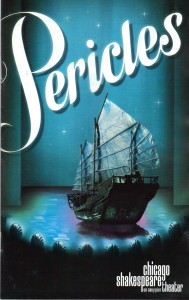 The great imagination I have in mind belongs to director David H. Bell.

For hundreds of years Pericles has been the whipping boy of Shakespearean scholars:

But all it takes is one exciting production to knock hundreds of years of accumulated dust off of conventional wisdom. Just look at Gregory Doran’s current production of Dekker, Ford, and Rowley’s 1621 The Witch of Edmonton at the Royal Shakespeare Company to see a marginalized play suddenly reborn to acclaim.

David H. Bell performs the same miracle of resurrection on Shakespeare’s 1607 play, a play burdened with the added handicap of two acts written  by a local brothel keeper and tavern owner, George Wilkens.

a romantic fairy tale, a morality play in which good triumphs mysteriously over evil; in which husbands are reunited with their lost wives and parents with their lost children; it depicts a world in which gods still appear and the miraculous can still happen.*

In other words, it depicts Elizabethan England in the clothing of fifth Century Greece.

The play is a Christian morality play. In Shakespeare’s day, Christianity was in the air of every day life. It was the curriculum of the schoolhouse, the polarizing political issue of the day, and the cause of most tavern brawls. Classical literature of Greece and Rome, as it arrived in England, could only be seen through Christian lenses. Mythological tales and gods were seen simply as early Christian tropes and types.

With Pericles, Shakespeare weaves the times’ Christianity into the fabric of Greece’s Pericles much the same way (but with less subtlety) as Tolkien weaves Christian tropes into his Lord of the Rings. (Pericles’ travels to and from the cities of Antioch, Tyre, Tarsus, and Ephesus may have provoked among playgoers a recollection of some cities in The Acts of the Apostles as well as the associated journeys of Paul and other disciples where Ephesus ruled as the center of Christian piety.) In Pericles the Greek gods are discussed and seen behaving as if Christian in nature. Pericles himself is rescued from the sea by three fishermen (“fishers of men”). The only item found on shore is his father’s armor, which becomes Pericles’ conquering “breastplate of righteousness.” Citizens talk of “fasting with fish.” And Diana of Ephesus radiates Mary the Blessed Theotokos. Her priestesses are, of course, “nuns”. Upon hearing of the loss of his daughter, the hero enters into the life of a Christian Nazarite. Against the play’s “good” characters struggle characters devoted to the second god of the play, Neptune, ruler of the sea, the personification of natural destruction and evil, and with his pillaging acolyte pirates.

In Pericles, the “bad” characters are defeated by the “good” characters’ steadfast virtue. Pericles discovers and reveals a secret incest which has caused hundreds of deaths. He then brings corn to the starving people of Tarsus, only to be betrayed later by the city’s duplicitous leaders. His daughter Marina bears  her father’s virtue. Her virginity has wonder-working powers; it destroys a brothel while winning the heart of her prince charming. The power of the Virgin restores the life of Pericles’ wife, Thaisa. Finally, in keeping with the pilgrim route of  the Elizabethan Christian faithful, the good characters arrive “home”, whether in this world or the next,  reunited with their loved ones, lost or deceased.

In the hands of a lesser director this plot could have been, and from the play’s meek stage history obviously has been, a dreary and tedious homily.

In Mr. Bell’s hands, however, the story becomes an occasion for cheers of “What pageantry, what feats, what shows, What minstrelsy, and pretty din’!” Brilliantly employing every theatrical convention from Sanskrit theatre, Brechtian epic theater, Chicagoan Story Theater, to musical comedy, director Bell marshals his team of risk-taking designers to fashion a three-ring circus of world cultural shapes, colors, sounds, and smells. Pericles offers everything from tender Shakespearean verse, to bawdy comedy, to daredevil combat, to beautiful singing and dancing.

Costume designer Nan Cibula-Jenkins and scenic designer Scott Davis amazingly present the entire world – visible and invisible, mundane and mysterious, literal and metaphorical – all the while reminding us that, for Shakespeare, all the world is Someone’s stage, and all are merely Someone’s players. Jesse Klug’s lighting, Henry Marsh’s music, and James Savage’s sound design capture the drama of Shakespeare’s Great Chain of Being as it sweeps characters, places, and passions through magical transformations.

The entire company of dancing-singing actors underscores the fact that it takes a village of excellent performers to effect a theatrical miracle. But several actors stand out. Of course Ben Carlson brings to the title role the experience of playing countless Shakespearean heroes, allowing him to sense just what this peculiar role needs, and having the stage history to provide it. Certainly his performance is the glue which holds all of the pieces together. Christina Panfilio as Marina, and Lisa Berry as Thaisa, eschew any conventionally trite notions of saintliness by playing the good women as  witty and strong. They energize their scenes. By casting Sean Fortunato as both the disturbed Antiochus and the kind Lysimachus, director Bell allows the gifted actor to show that goodness or badness is not a matter of nature, but rather of the choices one makes. Likewise, Lia Mortensen ably contrasts Thaisa, the selfless good mother, with her nuanced portrayal of the wicked and licentious stepmother, Dionyza.

Shakespeare’s last plays, romances of miraculous repentance, forgiveness, reconciliation, and reunion, marked his retirement from the stage, as he looked home to Stratford, and beyond, hoping and planning  his own repentance, forgiveness, reconciliation, and reunion. But before he left London, he wanted to show his peers that he could master the new forms then in vogue – Inigo Jones’ allegorical masques of music, song, spectacle and dance which were replacing the tragedies of character and comedies of situation of his heyday.

Because Pericles is so infrequently staged, David H. Bell’s production will probably be the best Pericles you will ever see. But even if Pericles were a staple of the Shakespearean canon, this production of Pericles at Chicago Shakespeare Theater would be one of the best you could see. Mouldy no longer.

Like Loading...
December 11, 2014 – 1:34 pm | By Paul Kuritz | Posted in from Paul, History, Poetry, Quotations, The Gospel of the Kingdom, Theater, Theology | Comments Off on PERICLES: “What pageantry, what feats, what shows!”