CHICAGO SHAKESPEARE THEATER: A TEMPEST FOR THE HISTORY BOOKS 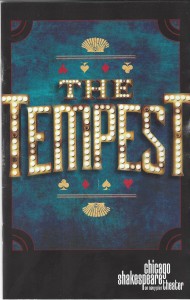 In his classic Prefaces to Shakespeare, Actor/Director Harley Granville Barker, reveals, in passing, an important secret about the theater:

“The magic of the theater” is a phrase often bandied about, usually meaning “theater is wonderful.” But the phrase contains an important idea:

The theater is full of “wonders”, things that cause astonishment and make people ask, “How did they do that?”

Consequently, throughout theater’s history, from the earliest Greek and Roman theaters 0n, the practitioners of theater and the practioners of magic worked easily and freely with each other.

The resounding success of the Aaron Posner and Penn production of William Shakespeare’s classic, The Tempest, clearly arises from a full appreciation and application of this historical fact. Even from the pre-show antics of the sprite, Ariel, the audience is caught in a spell which only grows as the production moves on from wonder to wonder.

Anyone who has ever tried his hand at magic knows the art demands clear thinking,  precise execution, and rigor, or all is lost. The directors’ production program notes for The Tempest  lay out their clear, precise, and rigorous goals.

This in itself is remarkable.

Most production notes are, unfortunately, pseudo-intellectual posturings, or socio-political manifestos which do nothing but inflate the egos of the creators. Most program notes would be hated by George Bernard Shaw, Harley Granville Barker’s theatrical (and perhaps biological) father, who believed notes test a director’s competence, and can point to a successful production:

“If for example, he writes “Shew influence of Kierkegaard on Ibsen in this scene,” or “The Oedipus complex must be very apparent here. Discuss with the Queen,” the sooner he is packed out of the theatre and replaced the better.”

Look at the list of Posner and Teller’s notes for The Tempest. They are of a short Shaw would love:

Consequently this Tempest is a rare production; one can clearly see each and every production note accomplished before one’s wondering and grateful eyes.

The directors bring to their stage exactly the kind of people they knew were needed to fit their precise roles:

“Magic alone can express my sense that life is not only a pleasure, but a kind of eccentric privilege.”

If you want to fully understand what Chesterton was getting at, you need to visit The Chicago Shakespeare Theater’s The Tempest. It is not only a pleasure, it is an eccentric privilege.

Like Loading...
September 10, 2015 – 4:07 pm | By Paul Kuritz | Posted in from Paul, History, Men and Women, Music, Poetry, Quotations, Theater, Theology, Uncategorized | Comments Off on CHICAGO SHAKESPEARE THEATER: A TEMPEST FOR THE HISTORY BOOKS