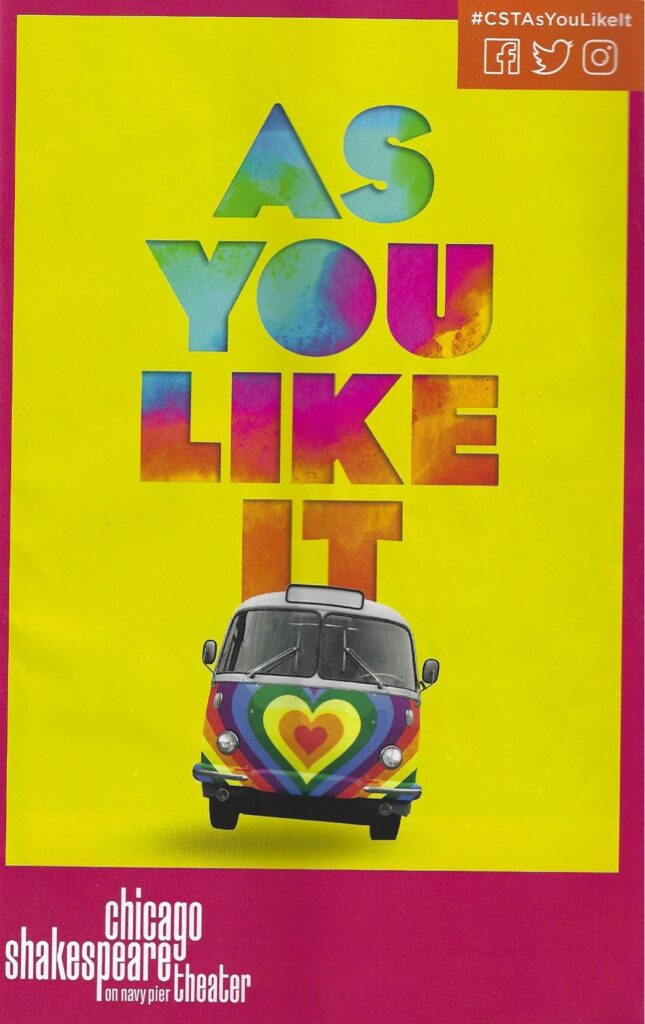 In the early 1970s countless undergraduate and graduate stage directing students had the “happy idea” of setting Shakespeare’s As You Like It in a then new and en vogue  Back-to-Nature commune,  populated mostly by trust fund baby revolutionaries fleeing Richard Nixon’s America. Arden was a Vermont ashram, the center of the American counterculture, home to beads and tie dyed tees. If there was music, it was, if not painfully original, at least  from the Woodstock canon rather than from the Beatles’ Abbey Road collection. By then, the Beatles were seen as part of the mainstream culture.

After the passage of half a century it may be possible to look at that interpretive  idea with clear eyes.  The countercultural trust fund babies are now grandparents, with stock portfolios of Facebook, Amazon, and Google. The Beatles are now symbols of their innocent youth.

Why should the similar idea work fifty years later?

Individually each actor seems a quadruple threat –  superior acting, singing, dancing and music making,  and together create an ensemble which , were it a sports team, would lead the league in assists.

One plus two equals a burst of theatrical energy, as if the group had been waiting for almost two years, imagining, practicing, studying, tuning, exercising, hoping, praying, and getting ready for the rehearsals to begin and the show to open.

And in fact that is exactly what they did; they have been building steam for just that amount of time and the result is  non-stop jubilation for those on the stage and those in the house.

Praise must go to each and every person involved in the production, but some must be singled out as representative of the group.

First, Adam (Steven Pringle), the role supposedly played by old Will Shakespeare himself. Adam is  given a celebrity welcome and treatment by the denizens of Arden.  Adam was the first resident of the first Arden, then known as Eden, and the company honors him by feeding him the place’s famous apples and serenading him with “Let It Be”:

When I find myself in times of trouble, Mother Mary comes to me

Speaking words of wisdom, let it be

Speaking words of wisdom, let it be.

As the Forest Lord (Kurt Schweitz) sings,  we are reminded that Mother Mary was the mother of Jesus Christ, also known as the Second Adam, and that the Forest of Arden, owned by Shakespeare’s mother’s Catholic family, was used as a haven for outlawed Catholics.

Details like this reveal that this production has a serious and deeply researched basis upon which to frolic.

Adam is at one point, led off stage by Jacques, the author of the famous Seven Ages of Man speech. Deborah Hay’s remarkably poignant rendition overwhelms  because she eschews speaking of each age analytically, as most Jacques do, and instead presents it from the point of view of one in her own Sixth Age. As a Sixth Ager, her aid of the Seventh Aged Adam achieves great power. Wearing an Andy Warhol wig, and perhaps a Warholian disposition,  Ms. Hay knocks out both “”I am the Walrus” and “The Fool on the Hill”. Her performance is a living incarnation of P.G. Wodehouse’s comment about melancholy,

“A melancholy-looking man, he had the appearance of one who has searched for the leak in life’s gas-pipe with a lighted candle.”

Veteran Kevin Gudahl, so impressive in Chicago Shakespeare’s Tug of War, plays both the good and the bad dukes with panache. He grows more like Christopher Plummer’s separated-at-birth brother each time I see him.

Heidi Kettenring, another veteran of Tug of War, with her ferocious Joan of Arc, assays two roles. She first appears  as the back-stabbing professional wrestling manager, Eleanor Rigby, through which she adds to the “Money (That’s What I Want) medley, and as Phoebe, the unlucky in love  flower child, who brings down the house with a Janis Joplinesque “Something.”

Speaking of bringing down the house, a newcomer, Austin Eckert as Amiens, stops the action with a lyrical “While My Guitar Gently Weeps”. It had absolutely nothing to do with the action, but was totally appropriate as an Elizabethan interlude, beautiful unto itself.

Other newcomers abound. Melanie Brezill plays Celia as the cute and perky cousin and  best friend of Rosalind, so well one can hardly imagine anyone else ever playing the role. Kayvon Khoshkam’s Touchstone is a cross between Elton John and Rip Taylor, delightfully following Shakespearean tradition by ad libbing topical references  and singing the pants off of “She Loves You”, “Helter Skelter”, and, with the delightful  Audrey of Lachrisa Grandberry, bringing tears of joy with a peppy “When I’m Sixty Four”.

And now for the leads:

The production is blessed with the presence of Liam Quealy who has everything that the British pop star Tommy Steele, Britain’s first teen idol and rock star, had to win over screaming audiences around the world. And Mr. Quesly easily has the same Tommy Steele charisma and talent.

Bernard Shaw said that “Rosalind is not a complete human being: she is simply an extension into five acts of the most affectionate, fortunate, delightful five minutes in the life of a charming woman.”  Lakeisha Renee defies Shaw and makes her a complete human being, while keeping her a most affectionate, fortunate, and delightfully charming woman.

When Rosalind is with her Orlando and her Celia, the play is sheer magic.: “We Can Work It Out”, ”I Want to Hold Your Hand”, “Do You Want to Know a Secret”, “Eight Days a Week”, “You’ve Got to Hide”, and “Can’t Buy Me Love” are in new hands and in exciting new contexts, much as are the songs of the amazing Bob Dylan in the great Conor McPherson’s Girl of the North Country.

Occasionally a play goes to New York from Chicago  and wins hearts and awards. The next one should be Chicago Shakespeare’s As You Like It.