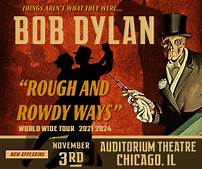 Since  it opened its doors in 1889 Chicago’s Auditorium Theatre has heard the world’s  great voices, in words, in music, and in both. On Wednesday, the eighty year old  Nobel Prize-winning Bob Dylan offered an inspired  concert which placed him in that pantheon of voices.

Dylan opened the concert with 1971’s “Watching the River Flow”, which, interestingly, begins with the question, “What’s the matter with me?” Nothing was the matter,. The audience was enthralled and entranced. Bob had something to tell us. As he said in December of 1979, “I don’t sing any song which hasn’t been given to me by the Lord to sing.” Bob Dylan’s words are like those of the Biblical prophets – true not just for him, but for all mankind.

He introduced during the two hour concert many of his new ballads, beginning with “I Contain Multitudes” which introduced a mortality motif which would pepper the entire concert repertoire. The first line “Today and tomorrow and yesterday too/The flowers are dying like all things do.”

With the next new song “False Prophet”, Dylan made  allusion to his appearance on stage: “you never would guess/ I’m nothing like my ghostly appearance would suggest.” This underlined the odd circumstance that, while all of his band members were clearly visible through illumination, only Dylan himself remained in the shadows for most of the concert. Unlike the usual star vocalist, his face was not illuminated, perhaps intentionally. He seemed to deliberately embrace the persona of a shadow or silhouette, except for the few moments an ambient light accidentally struck him as he moved to center stage, only to quickly to retreat to the seeming safety and obscurity behind his upright piano. He seemed to want  to place himself in the company of the ghosts who visit Dickens’ Scrooge to give warning of the Rough and Rowdy Ways they saw. And when the light did catch him, we  saw that Dylan still wore the ghostly white dinner jacket and striped dress pants he had on  when we last  saw him in 2017 Richmond, Virginia..

“False Prophet” also contained the ominous lines “Hello stranger – Hello and goodbye….Can’t remember when I was born and I forgot when I died.” More mortality to contemplate.

As he sang “My Own Version of You” certain lines stuck out:  “Can you tell me what it means to be or not to be/Is there light at the end of the tunnel – can you tell me please/ I want to bring someone to life – turn back the years.” Perhaps the creature Dylan sings of restoring to more fullness of  life is himself, and by extension us.

With the new song “Black Rider”, Dylan may allude to the Black Horse of the Book of Revelation, as did the late Johnny Cash, as he sings “Black Rider Black Rider tell me when – tell me how/If there ever was a time/ then let it be now/Let me go through – open the door.” To the Death which awaits us all?

In another new song “Mother of Muses” Dylan appeals to Calliope, the  Mother of Muses:  “wherever you are/I’ve already outlived my life by far/…Take me to the river and release your charms/Let me lay down in your sweet lovin’ arms/Wake me – shake me – /free me from sin/Make me invisible like the wind/Got a mind to ramble – got a mind to roam/I’m travelin’ light and I’m slow coming home” The song was immediately followed by “Gotta  Serve Somebody” from Dylan’s overt “Christian phase” The new song “Key West” seems to envision the resort town as a modern Elysian Fields, or Heaven,  which  Dylan  sees approaching us: “Key West is on the horizon line”

Dylan’s final song was from the album which introduced him to our generation, Highway 61 Revisited. The song “It Takes a Lot to Laugh, It Takes a Train to Cry contains one of his first uses of the train as an image of death, (most famously used in “Slow Train Coming”):

Now the wintertime is coming
The windows are filled with frost
I went to tell everybody
But I could not get across
Well, I wanna be your lover, baby
I don’t wanna be your boss
Don’t say I never warned you
When your train gets lost

Sitting beneath the Auditorium’s north mural  of Albert Francis Fleury ( 1828-1924) with the inscription “A great life has passed into the tomb and there awaits the requiem winter’s snows”, I wondered if the lighting, costume,  and song choices was Bob Dylan’s conscious, or unconscious, way of preparing his audience for the time when each of us will join the Black Rider. If so, the joy of Bob Dylan’s music, and the Hope in his heart, knows that every winter is followed by the Spring Resurrection, as enshrined on the  Auditorium”s south mural “O, soft, melodious springtime! First born of Life and Love!”

Bob Dylan contains multitudes indeed –  the sure knowledge of the life-draining coming winter, and the certainty of a New Life to come.