MODEST MUSSORGSKY HAS HIS DAY: BORIS GODUNOV DONE HIS WAY 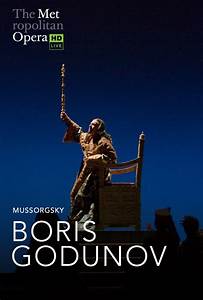 Exactly one hundred and fifty years since Mussorgsky’s opera Boris Godunov was rejected for performance by Russia’s Mariinsky Theatre his version of his opera is staged and transmitted live to hundreds of thousands of spectators around the world.

Modest Mussorgsky (1839-1881) came from a more or less peasant family in Russia. That fact, plus his unorthodox training in music, caused his colleagues to have  a suspicious and critical eye regarding whatever the composer produced.

The young man was considered a bit of a dandy, a ladies’ man, something of a fool, actually. But under all that was “an astonishingly original genius, who on the way to drinking himself to death created one of the greatest, most electrifying of all operas, Boris Godunov  (1869).” [i]

Mussorgsky had adapted the libretto from Alexander Pushkin’s play of 1825. Pushkin’s drama, “born of a fusion between admiration for Shakespeare and for Karmzin’s History of the Russian State.”[ii]

Consequently, the composer, anxious to have something on the stage, went back to the drawing board and composed an entirely new third act, threw out another scene, and then revised the rest of the opera very thoroughly. As a result, the first performance was a success with the public, while the critics hated it, even with the changes.

The Rimsky-Korsakov version was the Boris Godunov  which Serge Diaghilev brought to Paris in 1908 for  six performances—the opera’s first performance outside Russia. This version launched the great bass Fyodor Chaliapin’s international career, as he became identified with the title character. All subsequent singers attempting the role would look to Chaliapin’s work for inspiration.

In 1940, Shostakovich made his own edition of Mussorgsky’s opera.

The Metropolitan Opera’s 2021 presentation is of the original, seven scenes only, without any of the rewriting within the scenes undertaken for the first revision, and with Mussorgsky’s orchestration left alone

Tchaikovsky  biographer, David Brown,  has identified the value of Mussorgsky’s original libretto. “The most characteristic Russian scenario is like a strip- cartoon, each scene presenting a crucial incident or stage in the plot, leaving the spectator to supply in his imagination what has happened in the gaps between these incidents. And such gaps can be chasms: Boris’s first two appearances are separated by six years and the span of his entire reign”[ii] So while other composers sought to adapt Eugene Scribe’s “well-made play” formula to the operatic stage, Mussorgsky, and his compatriot Tchaikovsky, structure their works as a series of icons, tableaux designed to create an impression, while leaving the narrative to the Pushkin-schooled audience to supply.

Like Shakespeare’s Macbeth, Pushkin’s Boris Godunov tells of the psychological disintegration of a monarch. Each play reflects the culture’s Christian worldview. The Scotland of Shakespeare’s Macbeth mirrors the Catholicism of the new King James; witches lead Macbeth to his tragic end. The Moscow of Pushkin’s Boris is steeped in Russian Orthodoxy. Rather than witches leading to temptation, Orthodoxy offers the Holy Fool reminding everyone, in often outrageous ways, that they are created in the image and likeness of God. Boris is destroyed by his conscience, the seed of theosis, planted by God at the time of creation. Macbeth is destroyed by his trust in powers outside the realm of God’s love.

Director Stephen Wadsworth brilliantly introduces the relationship between Boris and the Holy Fool (Miles Mykkanan) through a beautiful series of pantomimic actions during the overture. The fool, and a symbolic toy top, weave in and out of Boris’ story as his conscience struggles with the truth and serve as a key element in unifying the opera’s dramatic action. Maxim Paster’s Price Shuisky, a force of nature, and Ain Anger’s cherubic Pimen stand as the poles between which Boris’ conscience bounces.

If one forgets what is not there, namely the century of interpolations and additions by a desperate Mussorgsky and his well-meaning friends, one experiences a spare, austere, harmoniously unexpected, occasionally clumsy, always powerful, often thrilling, study of not only a man named Boris Godunov, but of the human conscience in action.

Conductor Sebastian Weigle and chorus director Donald Palumbo have  created an overwhelming wall of sound which eventually overcomes both the hero and the audience. Vibrant colors and silhouettes characterize the spare but evocative set design of Ferdinand Wogerbauerr, and the gorgeous costumes of designer Moidele Bickel. Reliable Duane Schuler seems to have outdone himself with the fascinating interplay of light and shadow haunting the doomed tsar.

The cast is deep with talent. Of course Rene Pape dominates the stage with an unforgettable portrayal of Boris, detailed in nuance, yet still able to suggest an everyman quality about the person. He proudly carries on the legacy of greatness begun by Fyodor Chaliapin in his 1921 Metropolitan Opera performance. Prior to playing Boris, Chaliapin played Varlaam, almost in preparation for his turn as Boris. The current Met production has a future Boris playing Varlaam in the person of Ryan Speedo Green. Finding comedy in the situation, only to heighten the pathos, Green was a wonder to behold. Mezzo-soprano Megan Marino’s Feodor, last seen and enjoyed as Annina in the Met’s Der Rosenkavalier, and Eve Gigliotti’s Nurse, without her coven of Walkure, demonstrate the Met’s commitment to fill all roles with superior talent.

[i] Jan Swafford, Language of the Spirit. An Introduction to Classic Music. New York: Basic Books, 2007.