VA SYMPHONY HAS THEM DANCING IN THE STREETS 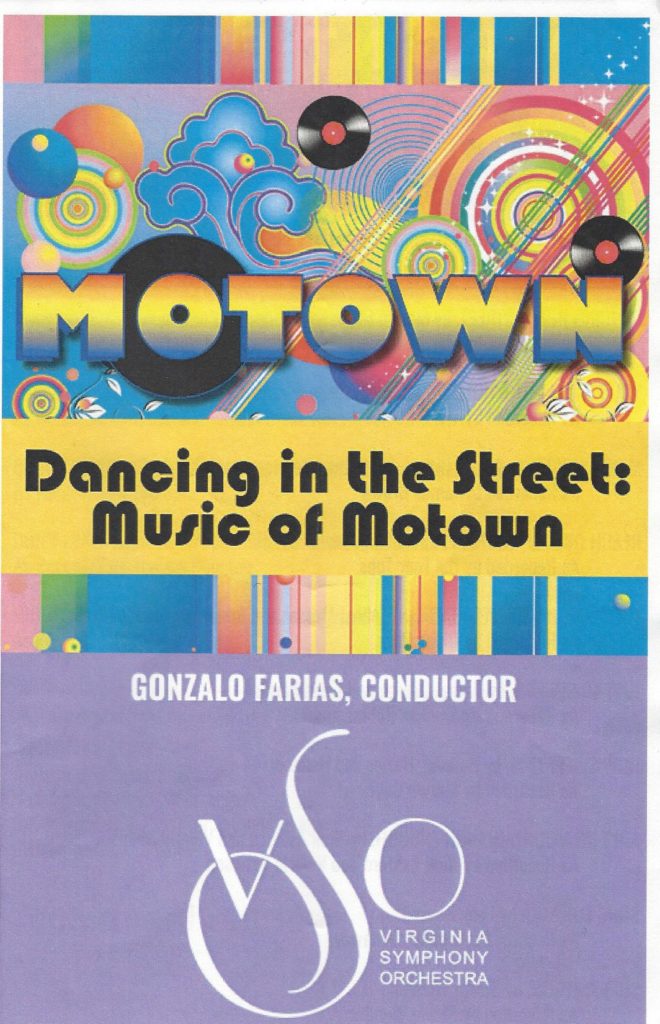 On an October evening, fifty-two years, ago a seventeen year old boy wandered into UVa’s Memorial Gymnasium in Charlottesville to hear his first pop concert,  performed by a group called Matha and The Vandellas. Ever since that night, Motown has been my pop music of choice, with some space reserved  for the eternal Bob Dylan, of course. In the intervening years I’ve heard the best: the Wicked Wilson Picket giving a free summer concert at a Rochester, New York housing “project”, two trips  to see the Ike and Tina Turner Review (with the Ikettes and “Shake a Tail Feather”), two visits to James Brown and the Famous Flames, “Little” Stevie Wonder, Anthony and the Imperials, The Four Tops, the Supremes, The Temptations, the Miracles, and on and on. While others may have grooved on the Beatles, the Beach Boys, the Stones, or Janis and Jimmy, I  stayed true to the beautiful, timeless, and life-affirming sentiments epitomized by the Holland, Dozier, Holland’s lyrics. I even used “The Way You Do the Things You Do” to teach college students how to perform iambic pentameter! We were there in Chicago to see the touring premiere of Motown: The Musical, along with hundreds of graying whites and blacks, and their grandchildren, brought, no doubt, to hear some “real” music.

Last evening at the Chrysler Hall, the first song presented in the  Dancing in the Street: The Music of Motown was, by no coincidence. Martha Reeves and the VD’s “Dancing in the Street, quite ably sung by the evening’s mistress of soul, Celisse Henderson. She would later soar with Stevie Wonder’s “Superstition” and in a duet with great American Idol Michael Lynche in Lionel Richie’s “Endless Love”. Coolly and inscrutably shaded for most of the concert, Mr.Lynche knocked the socks off of  James Brown’s “Man’s World” and “I Feel Good” and brought the audience tears a-stirring by out-Donny-Hathawaying Donny Hathaway with Leon Russell’s “Song for You.”

And  then there was Chester Gregory.

Mr. Gregory has played Berry Gordy in a “Motown: The Musical” tour and seems to embody most of Motown’s  mojo in one man. Smokey Robinson’s “You Really Got a Hold on Me”, the Four Tops “Reach Out I’ll Be There” paved the way for the evening’s high point among many performance peaks: The Temptations’ “My Girl”, preceded by  Ms. Henderson’s rendition of Mary Wells’ “My Guy”. It was a one-two punch that knocked the audience down for the count. And Mr.  Gregory sported a sharkskin tuxedo jacket perhaps in homage to the unique guy-group style. He and Mr. Lynche even exercised their feet and hands with some of the groups’ classic moves, once practiced in college dormitory halls throughout Motown-loving America.

While one of the soloists sang center stage, the remaining duo provided excellent background vocals, an often unappreciated skill.

The Virginia Symphony Orchestra members never seemed as happy as they did during this concert. And why shouldn’t they. It was great classic American music too infrequently preformed live today. It was a special privilege to hear and see the concert.

Also on hand were very talented guest musicians – saxophone, guitar, drums, and piano – who sadly, and inexcusably, went unnamed throughout the night.

New Assistant Conductor Gonzalo Farias made his Chrysler Hall debut with the concert. He revealed himself to be boyishly engaging, but with a mastro’s ability to juggle the needs of a symphony orchestra, a Motown band, and three inspired vocalists.

Like Loading...
November 24, 2018 – 10:19 am | By Paul Kuritz | Posted in Current Events, Dance, from Paul, History, Men and Women, Music, Poetry, Uncategorized | Comments Off on VA SYMPHONY HAS THEM DANCING IN THE STREETS