THE LONDON PALLADIUM KING AND I: NOT GOOD 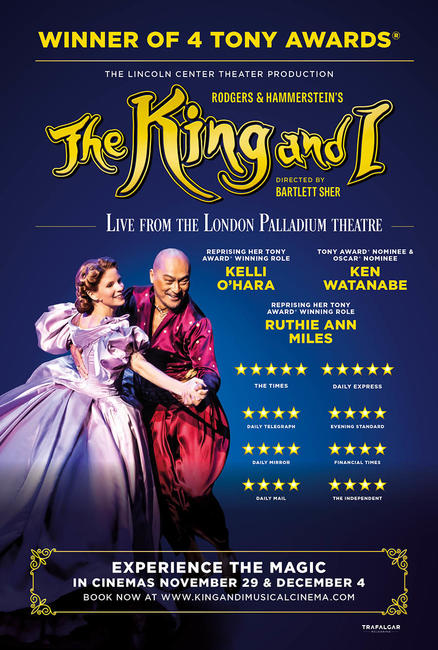 The King and I gets  its power from the fact that, at its core, the story is a retelling of the Beauty and the Beast tale.

The Lyric Opera of Chicago’s production of the musical made that crystal clear when it cast a nice guy where the beast should have been. The tension and suspense of the story springs from the possibility that Anna might, at any moment, for no particular cause, be violated or killed.

Written less than a decade from the end of World War Two, the composers,  consciously or subconsciously, mined the remains of the anti-Japanese and anti-American  propaganda which stoked the emotions of both sides . War Without Mercy by John W. Dower[i] chronicles the strategy employed by both sides to change the enemy’s perceptions: Japanese were often portrayed as “apes, bats, vermin, giants, rapists, midgets and children.” The Japanese also had a press depicting Americans as some of the worst macabre creatures imaginable. Both Americans and Japanese came to see the other side as less than human, probably  murders, rapists, and cannibals. So successful was the Japanese propaganda that thousands of Japanese women and children jumped to their deaths rather than surrender to the American forces.

Even a certified bleeding heart like Oscar Hammerstein II couldn’t quite rid himself of the vestiges of the American counterpart of propaganda. The vast majority of the first audiences for The King and I had gone through the anti-Japanese propaganda blitz, and no matter how immune or unscathed they thought they were, there lurked a level of perception which resonated when confronted by a beastly King of Siam. The film of Yul Brynner’s performance carries traces of the ferocious danger embedded in the character of the King of Siam. With less than an ever-present danger, Anna’s triumph is cheapened, and the characters’ arcs  are sadly diminished. Her defanging of the Beast King works to advance , however subconsciously,  the  reconciliation of the recent wartime foes.

The question today is, can producers and directors muster enough courage to cast and portray the King as  potential monster, a beast-in-waiting?

The unfortunate answer, after seeing several high-profile examples, is, unfortunately, no.

The charge of “racist” hangs like a career-ending Sword of Damocles over anyone nearing the great musical. The result can be a play more apply described, for the Chicago Lyric production, as Anna and the Siamese Woke Guy. At the London Palladium, the title seems to be Anna and  The Siamese Geezer.

I am second to none in my admiration of Bartlett Sher’s stage directing ability, but this shop-worn and tired version of The King and I has all the pizazz of a bus and truck touring show giving its penultimate performance. Even the great designer Michael Yeargan’s sets consist of just a few set pieces. Most of the locations and changes are accomplished and suggested by various arrangements of curtains and draperies. The equally great Catherine Zuber’s costumes lack her customary sparkle and finesse, except for the lovely costuming of the Little House of Uncle Thomas. The choreography, based on the original by Jerome Robbins seems too old-fashioned, except, again, for that of the Little House of Uncle Thomas which was crisp and hypnotizing.

Martin Charnin, the director of the original Annie has explained what might have happened to The King and I. In 1979, two years after ”Annie” opened on Broadway, he refused to renew the contracts of some 20 cast members.

”The company was stagnant,” said Mr. Charnin. ”The people were just walking through their performances. They weren’t reacting anymore. I could have put a midget in there and nobody would have looked down. I thought it was time to get new blood….’Not everyone has the constitution for a long run,” said Mr. Charnin, who appeared in the original production of ”West Side Story” for several hundred performances. ”After four months in ‘West Side Story,’ I was going crazy. So, I appreciate the difficulty, but my prime responsibility is to the quality of life in this production.”

The veteran actor Barry Nelson agreed, and says in William Goldman’s The Season, “I don’t think any actor really likes long runs. I don’t think humans were meant to do them.”

Most of the cast of this King and I have been at it since the show opened in March of 2015. And they look it.

But that’s not the only problem with Sher’s production. He has  imposed some contemporary notions which mortally wound Oscar Hammerstein II’s libretto.

The character of Anna is written as a typical 19th century British Christian missionary – mild, deferential, humble, educated certainly, but  not a crusading zealot bent on establishing a N.O.W, chapter in the Far East! Of course, Anna has some lines which communicate dissenting ideas. But a woman of Anna’s time, place, and situation would let the words  speak for themselves. She would seek to soften their edges with the mildest of tones and inflections, and with deferential gestures and body language. In this production, however, Mr. Sher has Kelli O’Hara, and, in fact, all the women, express their contrary opinions in the most militant of tones and with the most aggressive demeanor they can muster. Had they done so in 19th century Siam, the actual king would have cut the musical to a brief one act by reducing the number of women still breathing in his court.

Mr. Sher’s king is another problem. Yul Brynner, supposedly the authors’ ideal, was a virile thirty years old when the play opened. His posture was always erect, and his nose always pointed above the horizon. As Shakespeare might say, he bestrode “the narrow world/ Like a Colossus.” On the other hand, Mr. Sher’s king, the sixty-year-old Ken Watanabe, bestrides nothing. His first entrance reveals a stooped old granny glasses-be-speckled fellow who could be the stand in for Alistair Sims’ Ebenezer Scrooge. Hammerstein’s stage direction calls for the king to be revealed “seated cross-legged on a low table dictating.” Hammerstein presents a man issuing orders. Instead, Sher presents a man looking for answers. (Where did Sher’s king find an optometrist in 19th century Siam, by the way?) And Sher’s king rarely looks up; his focus is usually downward, and his body typically slumped. His exits, starting with the one following the song “Puzzlement” resemble a half-bent wounded animal scurrying off to safety.

Add to this the fact that the wearingly long run has flattened whatever character arcs had existed early in the run. As a result, Anna and the king now enter in their final incarnation. Consequently, neither one changes because the change has happened before the curtain arises. Anna remains a Know-It-All, while the king seems to be dreaming of a senior center, taking time out only for “Shall We Dance?,” in which Watanabe’s effortless grace suggests the king has been doing the English Polka all his life.

The production still has a few fine performances. Ruthie Ann Miles’ Lady Thiang is quite lovely is every way. Likewise, Takeo Osawa sports the raw authoritarian virility which should have typified most, if not all, of the production’s Siamese male population.

Gary Halvorsen, the premiere director for filming stage productions, seems to have been given strict instructions on how to film this production. The orchestra and conductor are never seen. And the fact that the musical is happening on a stage in a  theater is kept a secret until the curtain call, at which point a camera swings toward the balcony to reveal clapping audience members. Otherwise, the goal seems to be to make a marketable DVD, a  musical that looks as much like a movie as possible. The  result, however, is a very bad movie, rather than an exciting stage production.

At the end of the musical, Anna’s son, Louis, says of the king “He always frightened me.” The line is meant to be a truthful summary of what all the characters on stage and the audience have experienced. But, because our king has been anything but frightful, Louis’ remark has the opposite effect – it makes him a sissy, afraid even of a weak old man.

The King and I was a very disappointing event, to say the least.