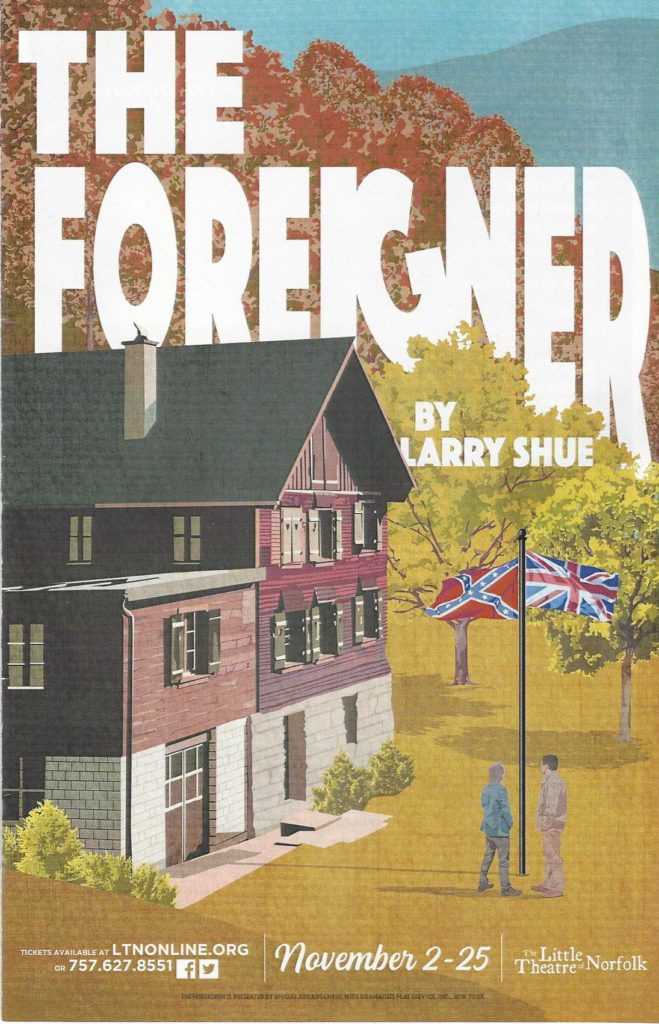 In the midst of perplexity, doubt, fear, anger, and uncertainty, laughter may be the fragrance that freshens the air.[i]

The air in and around Norfolk’s Little Theatre on Claremont Avenue  is definitely fresh courtesy of a satisfying production of Larry Shue’s 1983 farce, The Foreigner, featuring the fine acting of a dedicated group of performers.

Shue’s play is a perennial favorite, telling the tale of the Englishman Charlie Baker who travels to a lodge in Georgia with his friend, Sergeant Froggy LeSueur, who is on a military assignment. Charlie is a man stricken with an almost terminal shyness, and haunted by a death bedded wife who has had many lovers.

Nevertheless, Charlie  is  depressed over being separated from her. He begs Froggy to find a way to keep people from talking to him. Charlie just wants to be left alone so he doesn’t have to talk to anyone. So, Froggy creates a story that Charlie is from some unnamed far away exotic country, and that he can’t speak or understand a word of English.

The owner of the lodge, Betty Meeks, welcomes Charlie. She has never traveled out of her tiny town and is excited at having a “foreigner” in her midst.

Other characters arrive anon. Catherine Simms and the Rev. David Marshall Lee enter discussing the news that she is pregnant and that their wedding is still months away. Catherine’s dim-witted brother Ellard joins them, as does the obligatory racist/xenophobic “redneck”, Owen Muser. Charlie learns all the scandals and secrets of the guests, who have no difficulty revealing themselves in front of him.

(Contrary to popular progressive belief, xenophobia – the fear of strangers – is innate and hard-wired into our species. Science – namely evolutionary biology and human ethology – has demonstrated that the fear is universal among human beings, a necessity to help insure our species’ survival. Only through repeated and harmless cooperative encounters,  does the fear eventually subside and disappear. The Foreigner happily demonstrates this scientific truth[ii])

Credit  for the production’s success must first go to director Louise Casini who has cast the play impeccably and has helped to lead the actors into compelling characterizations. Terry Flint’s dominating set supports Ms. Casini’s work very well.

The cast is most ably led  by the Betty Meeks of Judy Burke. Ms. Burke’s Linda Loman in last season’s Death of a Salesman  was so wonderful that she was nominated for a 2018 Broadway World Central Virginia Best Actress Award.  As the ever-so-kind Betty Weeks, Ms. Burke displays equal facility with the trickiness of comedy. Jim Dwyer plays Charlie with great skill and success, beginning softly and innocently, only to build to a comic tour-de-force as he tells bizarre tales in his oddball pseudo-language. His sidekick Froggy LeSueur (Does the name suggest any Frenchness in his character?) is played leisurely, (perhaps too leisurely) and quietly, by Tom Coffey, whose British accent fortunately doesn’t fall into cliché. Ginakay Howell ‘s Catherine Simms, the ditzy debutante, is simply perfect, as is her fiancée the Rev. David Marshall Lee, played by Marshall Mulkey as if he were a staff member of Jim Bakkers’ late PTL Club. Mike Dunavan creates a frightening Owen Muster, so real he could have crawled out of James Dickey’s Deliverance. Finally, George Plank is given a role in which to shine – Ellard Simms. Mr. Plank, barely seen in Arsenic and Old Lace, and sort of seen in Death of a Salesman, presents a fresh interpretation of a role too often played as a mental defective. His scenes teaching Charlie resemble the classic comedic routines of Laurel and Hardy.

The same director responsible for the production’s great assets is also, alas, responsible, for the production’s greatest flaw – the pace and tempo/rhythm. Hearing sound designer John C. Roberts’ exciting  pre-show banjo music, I assumed the production would emulate the rollicking madcap pace of the music. But no. The production had all the dynamics of a 78-rpm phonograph record played at 45 rpm. Judy Burke’s Betty does what she can, when she can, to get the show on track, but she can’t seem to find anyone willing to reciprocate. The actors need to raise their characters’ stakes, and make their moment-to-moment objectives more urgent. No less an authority on comedy than George Bernard Shaw gives this most practical advice:

Never have a moment of silence on the stage, except as an intentional stage effect. The play must not stop while an actor is sitting down or getting up or walking off the stage. The last word of an exit speech must get the actor off the stage. He must sit on a word and rise on a word; if he has to make a movement, he must move as he speaks and not before or after; and the cues must be picked up as smartly as a ball is fielded in cricket. This is the secret of pace, and of holding an audience.[iii]

Despite the slow pace, The Foreigner works on the audience, though the smiles it elicits throughout would be laughs and guffaws with a sprightlier tempo. The play’s heart is the heart of all fine comedy-  someone isn’t what he appears to be. Charlie isn’t a foreigner, Ellard isn’t a dimwit,  and the Reverend and Owen aren’t benevolent. When the truth is revealed, the comedy embraces its requisite ending – Charlie and Ellard, the well-intentioned fools -succeed, while the Reverend and Owen – the ill-intentioned wits – fail.

The play ends with Charlie offering a toast to a job well done – “Blasny, Blasny”!

We should also raise our glasses to the Little Theatre of Norfolk’s production of The Foreigner with a collective, “Blasny, Blasny”!!

[i] Terry Lindvall, The Mother of All Laughter. B and H Publishing Group, 2003.