SHAW’S YOU NEVER CAN TELL: Is a Father Necessary? 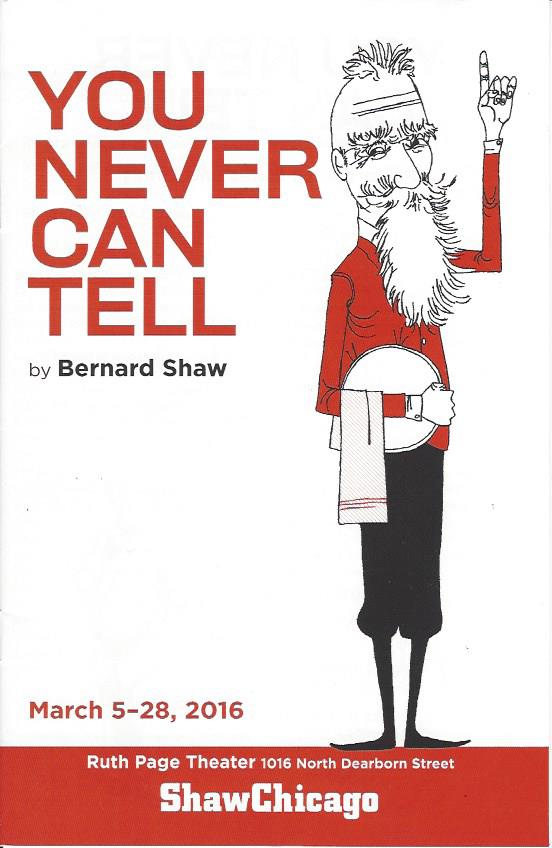 In an issue of the Journal of Marriage and Family, Judith Stacey, a professor of sociology at New York University, and Timothy Biblarz, a demographer from the University of Southern California, consolidated the available data on the role of gender in child rearing and concluded “based strictly on the published science, one could argue that two women parent better on average than a woman and a man, or at least than a woman and man with a traditional division of family labor.”

Finally, scientific proof of what “new” women have maintained from the time of England’s Victorian socialists!

In You Never Can Tell (1899) George Bernard Shaw weighs in on the subject, in his own contrarian way.

Shaw’s own mother taught young Sonny the worthlessness of a father. “She believed, and persuaded her son to believe, that ‘everybody had disappointed her, or betrayed her, or tyrannized over her.’ From this time onwards Sonny began to see his father through his mother’s eyes, as a man to imitate, but in reverse…. In her eyes he was an inferior little male animal tainted with all the potential weaknesses of her husband.” *

The mother’s actions, whether verbal or non-verbal, cause a child to be psychologically manipulated or bullied into believing a loving father is the cause of all their problems, and/or the enemy, to be feared, hated, disrespected and/or avoided.

Shaw introduces his first alienating mother in You Never Can Tell. Like his own mother, Bessie Shaw, Mrs. Clandon is estranged from her husband and has three children, two girls and a boy. (Throughout his career Shaw would depict children kept from a father, like the Reverend Samuel Gardner in Mrs. Warren’s Profession and Andrew Undershaft in Major Barbara, and insist that even mature children receive a father figure guardian to replace a deceased father, as in Man and Superman.)

Mrs. Clandon is a Victorian cross between Martha Stewart and Betty Friedan, a self-righteous, liberated and unconventional author of a series of what-to-think-about-just-about-everything books. For some reason she had married a man of the most traditional values and manners, Fergus Crampton. When she saw the problems arising when their values and ideas collided, she packed up her young children, changed her surname, and moved to Madeira, Spain, where she has raised the children according to her own “modern’ ideas, and consequently to hold ideas and manners antithetical to those of their father.

The children have grown curious about their paternal ancestry, so Mrs. Clandon takes them to seaside England to meet the family solicitor, Finch M’Comas, whom she hopes will answer her children’s many questions. Played beautifully, as if the role were custom-written for him, by Jonathan Nichols, the actor should not be surprised  to receive audience calls asking for his representation in upcoming court cases.

As Shaw would have it, Mrs. Clandon’s oldest daughter Gloria meets a charming dentist, Valentine, whose landlord just so happens to be Mrs. Clandon’s husband, and the father of her children.

The inevitable family reunion holds the expected fireworks, and is calmed by the most charming of waiters, Walter Boone, whose son, the famous lawyer Walter Bohun, eventually resolves the Crampton/Clandon family conflicts, as best as possible.

Director Robert Scogin has once again assembled an excellent cast of veteran Shaw Chicago actors and newcomers. Mary Michell, the company’s resident  mother, again wraps her character, Mrs. Clandon, with charm so irresistible, that Mrs. Clandon’s irritating ideas become but a surprising after thought. Oldest daughter Gloria (actually Sophronia) is played by Barbara Zahora, giving one of her strongest performances to date as a high-minded New Woman Amazonian. Zahora somehow suggests that the ideas of the Schopenhauer book Gloria’s been reading has begun to raise doubts about her mother’s infallibility. (Perhaps she’s been reading Schopenhauer’s notorious essay, “On Women”, with thoughts such as,

One needs only to see the way she is built to realize that woman is not intended for great mental or for great physical labor.
Women are suited to being the nurses and teachers of our earliest childhood precisely because they themselves are childish, silly and short-sighted, in a word big children, their whole lives long: a kind of intermediate stage between the child and the man, who is the actual human being, ‘man.’

The fundamental defect of the female character is a lack of a sense of justice. This originates first and foremost in their want of rationality and capacity for reflexion but it is strengthened by the fact that, as the weaker sex, they are driven to rely not on force but on cunning: hence their instinctive subtlety and their ineradicable tendency to tell lies: for, as nature has equipped the lion with claws and teeth, the elephant with tusks, the wild boar with fangs, the bull with horns and the cuttlefish with ink, so it has equipped woman with the power of dissimulation as her means of attack and defence, and has transformed into this gift all the strength it has bestowed on man in the form of physical strength and the power of reasoning.

The new ideas have intrigued Gloria and begun to weaken the strength of her mother’s indoctrination, making her susceptible to the traditional wooing of Valentine, the rakish five-shilling dentist. As played by the marvelous Christian Gray, the Valentine-Gloria scenes are the most entertaining male-female scenes you are apt to see in Chicago. They echo Beatrice and Benedict, Mirabell and Millament, and, foreshadow the later Jack Tanner and Anne Whitefield encounters in Man and Superman.

Allison Cook and Zachary Paul Lawrence play the Victorian spoiled brat children of Mrs. Clandon, the wildly obnoxious Dolly and Philip. The actors’ problem is that what would be considered beyond the pale behavior in Victorian times has become now an example of typical child behavior in the 21st century!  Ms. Cook seems on her way to remedying the problem by pushing the envelope at every occasion; Mr. Lawrence seems inclined to want to follow her lead into unknown behavioral territory, but is too wary of what might be there.

The family is of one opinion regarding their favorite waiter, Balmy Waters. As played by the ever amusing, always sincere Jack Hickey, we understand why the world’s leading character actors have been drawn to a character which seems so bland on paper. The role requires a marvelous actor like Mr. Hickey to breathe dramatic life into it.

Shaw makes the character of Walter Bohun, the famous lawyer,  the son of the waiter to contrast a son of a two-parent family, Mr. and Mrs. Boone (changed from Bohun to spare his up-and-coming son the shame of having a waiter as a father), with Phillip the son of a mother only, Mrs. Clandon. Jesse Dornan presents Bohun, one side of the contrasting male offspring, with zest and panache. Shaw wants Bohun to be seen as the exact opposite type of young man from Phillip. To paraphrase a character’s reaction to lawyer Bohun, it is a pleasure to watch the working of a trained and powerful actor like Mr. Dornan—-very stimulating, very entertaining indeed.

Finally, Skip Lundby, usually a fine and dependable player in past Shaw Chicago productions, seems, for some reason, unprepared to perform. In addition, his Moses/Grizzly Adams appearance seems out of place and unmotivated.

While not a guffaw maker, You Never Can Tell will have you smiling harder than you can recall. And that’s pretty darn good, you know.

You Never Can Tell might be the byline for what one should expect from Mr. Shaw on any subject he puts on stage. At a time when socialists were championing the ideas of the New Woman, the contrarian Shaw presents a subversive hymn to the necessity of fathers.

Of social scientists Stacey and Biblarz’s study and conclusion, Shaw might repeat his famous quotation: scientists “can never fix one problem without raising ten more”, and point to the fatherless children strewn across our country

And on and on.

Count on our friend Bernard Shaw to surprise us with the truth.