Chicago Shakespeare Theater’s Othello: The Dark against the Light, Prose against Poetry 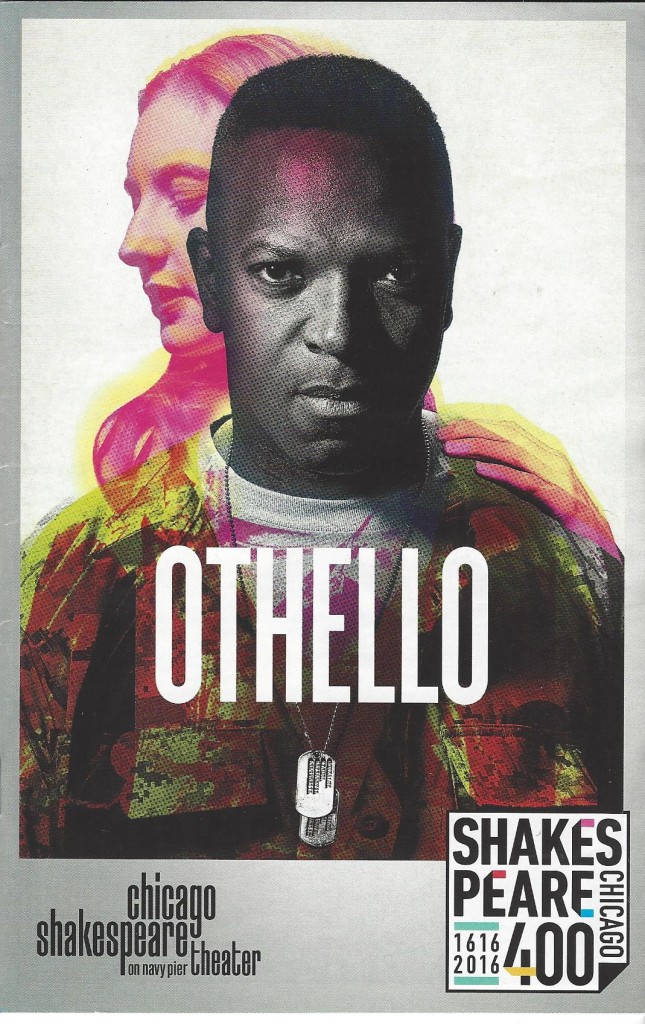 What is particularly, and shamefully, interesting to us now is the fact that a black man should be acceptable, to an audience inclined to xenophobia, as a great leader of men. Othello’s colour had no connotations of enslavable inferiority. There were great negroes about in those days (or Moors – Moor being a generic term for a dark-skinned man), like Antonio Manoel de Vunth, who was the King of Congo’s ambassador to the Holy See. A black Christian or even pagan was far preferable to a fair-skinned Muslim, and it is against Muslims of lighter skin than his own that Othello leads the Venetian army*

But as Hamlet, a revenger like Iago,  reminds the Player, a theater play is that

whose end, both at the first and now, was and is, to hold, as ’twere, the mirror up to nature; to show virtue her own feature, scorn her own image, and the very age and body of the time his form and pressure.

But what type of racism?

That seems to be the jumping off point for the Chicago Shakespeare Theatre’s production of Othello.

Munby likewise sets his Othello amid US military forces fighting in the Middle East, with clever and functional battleship grey settings by Alexander Dodge. Linda Cho’s dramatic costumes, saving solid colors for the characters-as-civilians, add a simple dignity and stature to the events, as a counterpoint to the anonymity of the sun-faded camouflage battle fatigues.

Lindsay Jones’ sound design and original composition is to this Othello what Tom Holkenborg’s sound was to Mad Max: Fury Road – essential and integral and wildly exciting.

The casts for both Hytner’s and Munby’s Othellos are multi-racial, so the racism explored in these productions is not of the institutional variety. (The military led America’s march to integration, after all.)

The racism here is of the individual, personal nature, one excuse among many used to justify a course of revenge.

Shakespeare’s big, sprawling play is a classic in Western civilization’s long concern with the ongoing battle between the forces of Darkness and those of Light, between Hell and Heaven, Evil and Goodness, Death and Life.

Northwestern University’s Shakespeare scholar Harold Goddard identified Iago, always at war, always striving to destroy, as the standard bearer of the dark side.

Yale’s Harold Bloom described the nature of Iago’s counterpart, the champion of the Light, Othello:

Othello is a great soul hopelessly outclassed in intellect and drive by Iago…. It is important to emphasize the greatness of Othello, despite all his inadequacies of language and spirit. Shakespeare implicitly celebrates Othello as a giant of mere being, an ontological splendor, and so a natural man self-raised to an authentic if precarious eminence. **

The would-be prince of this earth, Iago (Michael Milligan), meets the Great-Souled Poet-Warrior, Othello, in a contest of prose versus poetry. Iago uses false, but sincere, plain language, expediently, to advance his plot. Othello (James Vincent Meredith) uses language metaphorically, often majestically, to reveal the God-given splendor of the human soul; his linguistic poetry-making skills have, after all, won a young girl, Desdemona’s, heart.

Othello is a long play. Sir Tyrone Guthrie famously advised directors of long plays, “even the Sermon on the Mount could use a bit of cutting.” Director Munby could take this advice.

Too many actors, including the principals, seem as if they have been given too many words for what they want to say, for what they want to accomplish. Shakespeare’s language is thus, unfortunately, reduced to the expedient tool of Iago. Few characters seem to have time to luxuriate in the well-turned phrase, or the fresh-minted word.

The contemporary setting also seems to  subconsciously play upon the actors’ handling of the diction. Subliminally, the actors may be striving to suit their manner of speaking to their manner of dressing, to the subsequent detriment of Shakespeare’s (and Othello’s) poetic soul.

The forced-march pace of the production also interferes with Iago’s great monologues, in which the audience is treated to actually watching the human mind devise evil schemes right before their eyes. The production’s tempo-rhythm makes Iago simply report to the audience of what he has already decided to do, rather than include them in his improvisational machinations as he concocts his trap.

Nevertheless, all of the actors turn in at least good performances, some outstanding, and one a classic.

The classic performance is that of Luigi Sottile as Cassio.

No matter how many Cassios you may have seen, Mr. Sottile’s performance will reveal new and wonderful aspects of the character to you. Not a wimp or bookworm, as too many productions suggest, this Cassio is a delightful young man, full-spirited, eager and hungry for all life has to offer. If you saw Mr. Sottile’s Ferdinand in CST’s The Tempest, you really owe it to yourself to see him redefine this role.

Jessie Fisher’s Emilia is a strong, intense, and focused military person. Bethany Jillard’s smart and sophisticated Desdemona (not as Shakespeare scholar Harold Bloom would have her – an innocent, wide-eyed and virginal teenager) and Emilia produce one of the production’s strongest moments in Act IV scene 3.

David Lively’s double duty Brabantio and Gratiano make both a strong impression and a major contribution to the action, delineating each character clearly and purposefully. Fred Geyer’s Rodrigo breaks with traditional interpretations to offer a fresh and engaging look at the frustrated character. Melissa Carlson’s Duke of Venice transforms the role from male to female seamlessly and effectively.

The ensemble of soldiers create a strong content for the principals’ story through imaginative stage business convincingly executed. However, when the ensemble is used merely to cover scene changes, their actions seem random and unmotivated.

At the Chicago Shakespeare Theater’s production of Othello Shakespeare’s historic theatrical revelation is clearly on view: Skin color is irrelevant to the most important question of existence. A light-skinned man may be the agent of Darkness, and a dark-skinned man the agent for the Light, an insight as important now as it was four hundred years ago.