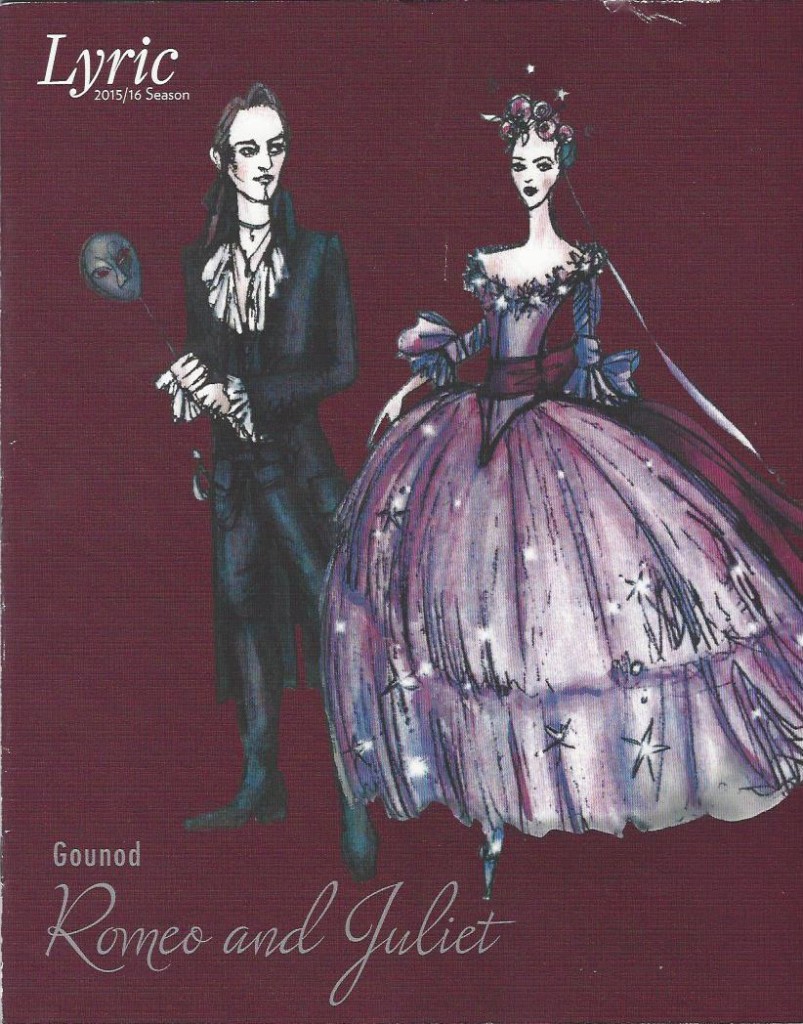 Charles Gounod’s opera, Romeo and Juliet,  has a long and important relationship with Chicago.

When the Auditorium Theatre premiered its very first opera on December 10, 1889, Gounod’s Romeo and Juliet was the choice. The production starred Adelina Patti, the woman whom Verdi called “the finest singer who ever lived”. Ms. Patti received $3000.00 and 10% of the gate for each performance. (For the gala, Ms. Patti dropped Juliet’s half-mourning costume in favor of a brand new gown featuring ample decollete.)

In 1896 Romeo and Juliet returned to the Auditorium with a production featuring the tenor Jean de Reszke as Romeo, and the great Nellie Melba as Juliet. During the balcony scene, an audience member, later identified as Robert Richard Rothman, walked onto the stage and began to threaten Romeo. De Reszke claimed that the madman was apprehended only after he drew his sword and pinned Rothman in a corner until stagehands could remove him.

To celebrate the Auditorium Theatre’s twenty-fifth anniversary, Romeo and Juliet returned on December 14, 1914. The production is remembered for Lois Elwell’s Juliet, who fell off of the bier, and began rolling toward the orchestra pit until friends pulled her to safety.

The great Russian soprano Maria Kouznetsova debuted at the Auditorium as Juliet on January 5, 1916 opposite Lucien Muratore’s Romeo. Ms. Kouznetsova had such exceptional breath control that she actually waltzed as she sang in Act One. In Act Five, when Muratore forgot his dagger, Kouznetsova simply turned her back to the audience, and killed herself with an imaginary one.

In 1924 hundreds of spectators milled outside the Auditorium Theatre, unable to obtain tickets to the farewell performance by Amelita Galli-Curci. To say farewell, the great soprano selected, what else, Juliet opposite the great Lucien Muratore, who claimed the cloak he wore was that of the actual Romeo, which he, an amateur archaeologist, had somehow excavated in Verona. In attendance to witness history was the greatest stage actress of her day, the reclusive Italian, Eleanora Duse.

Before moving to the new Civic Opera House in the fall, the Chicago Opera Company gave its final performance in the Auditorium on January 26, 1929. The opera, Romeo and Juliet, featured Edith Mason as Juliet. The Chicago Tribune covered the historic event on its front page:

Then the curtain fell on the moonlit garden, [conductor] Polanco signaled to the orchestra, and from the pit arose the melody to “Home Sweet Home.” It was unannounced and a surprise, but when it was followed by “Auld Lang Syne” the audience, unprompted, rose to its collective feet, and as many as knew the words sang them. Miss Mary Garden exclaimed, “Bravo,” and waved a red handkerchief from her box on the right hand side nearest the stage, and as the refrain was repeated, she was seen, if not heard, to sing at least one of its phrases.

Since Chicago’s first Romeo and Juliet, stage directors have assumed the star status formerly reserved for the singers. Consequently, the current production of the Gounod classic is significant as the Chicago debut of the hottest director in America, if not the world – Bartlett Sher.

Mr. Sher is successful, I believe, because he eschews the High Concepts which characterized so many of the stage directors between the 1970s and the 1990s. Instead, Mr. Sher cherishes text and music, engaging his considerable imagination on finding interesting, but modest, ways to energize them for today’s audience. In addition, his great strength is in his selection of collaborators, and an ability to blend his own work seamlessly with theirs.

Bartlett Sher’s Romeo and Juliet debuted in Salzburg and played in Milan prior to opening in Chicago on its way to New York’s Metropolitan Opera this fall.

The chief and most transformative idea Mr. Sher gave the opera is setting the action in the 18th century. With this simple transposition, we are presented with an opera visually echoing both Les Miz and Hamilton. Catherine Zuber’s costumes allow the dynamic characters to be seen with fresh eyes, though Juliet’s Barbie pink ball gown seems more suited to a Disney on Ice cavalcade. Designer Michael Yeargan’s set is not as flashy as his Nabucco set earlier this year, but it is just as evocative and powerful, especially in tandem with Jennifer Tipton’s subtle mood lighting, which keeps the roaming focal actor highlighted at all times, while he or she moves amid, and through, the always surging crowd.

In addition, Mr. Sher has a very fine way with actors, especially singing actors. He finds ways to turn seeming inadequacies into strengths, and strengths into character defining traits. His casting of Joseph Calleja and Susanna Phillips is a case in point.

This Romeo and Juliet are not rebellious teenagers combating both parents and hormones. (The record for the oldest singers to assay Romeo and Juliet in Chicago were grandparents Alfredo Kraus and Mirella Freni in 1981.) Instead, these lovers are romance-experienced thirty somethings, wary, but sure when the real-deal arrives. Not impulsive, these lovers are intelligent and thoughtful all the way to their repenting end.

In addition, Sher’s touch even allows all chorus members, save one over-the- top male chorister, to give at least good, if not strong, support, as they embody the all-important teeming life of urban Verona.

The stage is always alive in Sher’s production. Characters scurry in and out, fleeing or chasing, preparing the audience for the outbreaks of violence soon to come. Under Mr. Sher’s leadership, his work blends seamlessly with that of choreographer Chase Brock, and the dean of fight masters, B.H. Barry. Barry creates aggressive and taunting movements which permeate the relationships, ebbing and flowing, until finally bursting into astounding displays of combat. The World Wrestling Federation was never more exciting.

How can the performances of Joseph Calleja and Susanna Phillips be captured in words?

They can’t. They simply transcend, they profoundly move, they, finally,  thrill.

Joseph Calleja looks like the last person one would ever cast as a traditional Romeo.

That fact gives his performance its basis for greatness.

Mr. Calleja is a towering, macho, red-meat eating, hard-drinking, no nonsense presence, who seems to have wandered out of a rugby club celebration.

And then he opens his mouth.

The name Luciano Pavarotti is often found in reviewers’ sentences describing Mr. Calleja’s voice. And the comparison is apt and just. Calleja’s voice is not only strong, but tender, capable of sharing, or hiding, any emotion quickly or slowly, with nuance or with boldness.

Susanna Phillips first accomplishment is not to be overpowered by Mr. Calleja.

She isn’t. And that is due to Ms. Phillips own innate talent, Mr. Calleja’s collaborativeness, and the skills of Mr. Sher and conductor Emmanual Vilaumne. Vilaumne seems to be a romantic Frenchman who knows the important difference between genuine heart-wrenching sentiment and cheap sentimentality, between powerful theatricality and trite claptrap. It is a joy to catch his conducting the two principals in their duets.

Ms. Phillips’ Juliet is a modern young woman, perhaps despairing of ever finding the right man, almost willing to settle. She is a very intelligent Juliet. Her Juliet is not living out a romantic fantasy. Her Juliet has finally found the right man and Will. Not. Lose. Him.

All in all, to paraphrase a notorious Oscar Wilde quotation: One must have a heart of stone not to be moved by the deaths of this Romeo and Juliet. Gounod’s great work of art is not Shakespeare’s. But then again, Shakespeare’s great work isn’t that of Arthur Brooke. Opera has a different teleology than drama, and drama a different teleology than poetry. One need not choose to fully appreciate each unique art.

In 1944 the famous screen soprano Jeanette MacDonald sang Juliet at the Civic Opera House. Claudia Cassidy, the Tribune’s critic, loved her. Her praise of Ms. MacDonald applies to the entirety of this Lyric Opera’s Romeo and Juliet:

“Breath-takingly beautiful to eye and dulcet to the ear.”

This performance is of the kind one will never forget.