The Raven Theatre’s A LOSS OF ROSES: The Ordinary Becomes Extraordinary 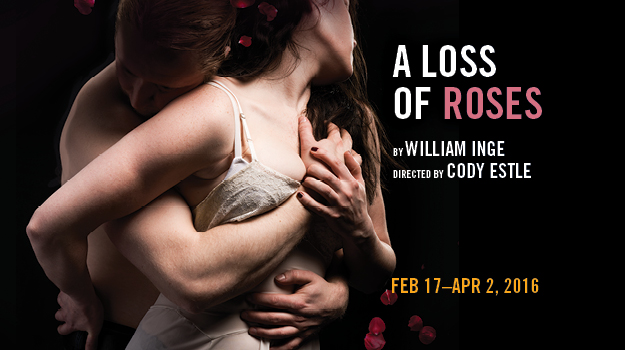 The story of Chicago’s role in fostering the career of Tennessee Williams is well known.

But Chicago’s role in the career of America’s other great playwright, William Inge, is not as familiar.

Inge took him up on the invitation. As the two men watched Williams’ The Glass Menagerie, Inge saw his own overly-involved mother, his absent father, and their distorted and wounded children. Then and there Inge realized that his own life held the raw material for a career as a playwright.
William Inge left the Civic Theatre that evening as a playwright-in-waiting.

While Williams, along with Arthur Miller, the other “great” playwright of America’s mid twentieth century, continue to be heralded, the plays of William Inge have, until recently, been passed over, even though his first four plays were major box office successes, even though each became a successful film, even though Inge won both the Pulitzer Prize for drama, and an Oscar for best original screenplay.

The great American critic Terry Teachout has noted that Inge’s characters are “so true to life that they reach a point in which they transcend the bounds of the ordinary.”

The coarse, blowsy pseudo-poetry of Arthur Miller’s Death of a Salesman (1949) and the melodramatic hysteria of Williams’ Cat on a Hot Tin Roof (1953) are hard to take seriously after seeing a well-staged” William Inge play.

And the Raven Theatre Company has provided just that; a wonderfully staged version of Inge’s own favorite of his plays, A Loss of Roses.

A Loss of Roses was the first Inge play to fail on Broadway, partly because Inge refused to compromise on the play’s ending as he had with the other plays’ directors on his previous ventures.

Inge stood his ground. He would rather be true to the life he knew than compromise for commercial success.

A Loss of Roses is directed expertly by Cody Estle, whose Dividing the Estate on the Raven’s larger stage showed his dexterity with America’s other Chekhov, Horton Foote. This time Mr. Estle works in miniature.

Again within designer Jeffrey D. Kmiec’s setting, and amid Christopher Kriz’s sound design, his A Loss of Roses hints at a grandeur-through-the-ordinary akin to the Japanese Noh Theater.

As with the Noh Theater, the playing area is a raised roofed platform (the home of Mrs. Helen Baird and her son Kenny) representing a house and a garden. Stage left is the main entrance and exit, what Noh would call the hashigakari. Mr. Kmiec’s design is secretly bold, evocative, imaginative, economical, and conducive to transformational performances.

The Midwestern soundscape provided by Christopher Kriz (who created the dazzling sound environment for Hillel Levin’s Assassination Theater) suggests that the guitar of the Midwest contains more than melody. Dark shrill chords, like those in a Noh performance, dot his sound environment. The music sets up expectations for significance to emerge from the mundane.

And it does in Mr. Estle’s direction and in the uniformly excellent performances by a well-chosen cast of players. As Chicago actors, each plays with exciting high stakes, though in a muted, understated mid-western key. As in a Noh performance, stage and body movements in this production are few but significant. Small gestures resonate with the power of full stage movements. The tiniest action, glance, or tick has choreographic significance. As a result, Estle’s audience is mesmerized by the work of the director and his actors.

Abigail Boucher’s Helen has a kindness that goes only so deep before it hits an ironclad sense of duty. Sam Hubbard’s Kenny wants to love a woman and be a man like his father but only his mother remains to model for his desires. His best friend Geoffrey “Jelly” Beamis (Antonio Zhiurinskas) is a classic pal, balancing fondness with self-interest in a shared desire to smoke.

And then there is Lila Green’s theatrical band: Barbara Roeder Harris’s Mme Olga seems a wonderfully harmless affectation rather than a genuine Russian thespian, Lane Flores’ Ronny Cavendish subtly plays what Inge may have feared he would have become had he stayed an actor. Joel Reitsma plays Ricky Powers, Lila’s Machiavellian pimp/boyfriend, as a man who need only talk to menace.

Eliza Stoughton plays Lila Green. She and director Estle worked together on Raven’s Dividing the Estate where Ms. Stoughton twinkled her talent as the school teacher, Pauline. Now Mr. Estle gives her the green light to rise and shine.

Blanche DuBois in Williams’ A Streetcar Named Desire is generally considered the most desirable role in American drama for an actress to play. Blanche’s exit from that play is considered one of the great moments in stage history.

However, Lila Green’s final scene and exit from Cody Estle’s A Loss of Roses, as played by Eliza Stoughton, can make you forget about Blanche DuBois, even forget about Tennessee Williams. It is as devastating, as heart-breaking, a moment you will ever experience in the theater.

Lila’s final hopeless words could well have been Inge’s: “No. No one’s gonna proteck me.”

As the great American critic Harold Clurman noted, Inge’s plays were “born of his own distress”. Shortly before his too early death, Inge became a Roman Catholic, hoping that faith might ease his pain. He found his soulmate in Saint Thomas a Kempis who touched Inge’s soul with these words:

The Raven Theatre lovingly creates William Inge’s paradoxical vision of the world: misery in abundance, but peopled by those who, nevertheless, seek to find something, or someone, to love in it.