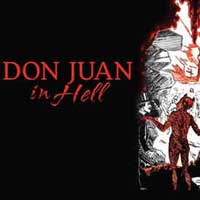 Man and Superman by George Bernard Shaw and a Midsummer Night’s Dream by William Shakespeare are the only two plays I know which have individual acts which have been removed from the plays and performed alone as an evening’s entertainment – The Most Lamentable Comedy and Most Cruel Death of Pyramus and Thisbe (Act V scene 1 of Shakespeare’s play) and Don Juan in Hell (Act III scene 2 of Shaw’s play). The former is is a court entertainment in celebration of the royal wedding of Theseus and Hippolyta. The latter is the dream of Shaw’s fleeing hero, Jack Tanner, in the Sierra Nevada, which convinces him to reverse his course, and to yield to Ann Whitefield’s marriage plans.

Jack Tanner is a descendent of Mozart’s Don Giovanni, conceived by Shaw as the victim of vamping women, rather than as the notorious seducer of women. In the mountains, Tanner, presented in Man and Superman as a know-it-all blow-hard revolutionary, has a nightmare in which he (in the guise of his ancestor Don Juan Tenorio) is stuck in hell in a seemingly endless debate with Ann Whitefield’s other guardian Robuck Ramsden (in the guise of Mozart’s Statue of the Commander Don Gonzalo ), Ann herself (in the guise of Mozart’s Dona Ana de Ulloa), moderated by Hell’s host, The Devil (who happens to resemble the lovesick revolutionary who has captured Tanner’s party) and, gaining no ground for any of his cherished ideas, Don Juan (Jack Tanner)leaves the debate hall.

One by one Don Juan/Tanner’s cherished opinions are countered and checked. But Don Juan/Tanner is oblivious to losing to the most unrevolutionary and unphilosophical of opponents. The debate ends with Don Juan leaving Hell in favor of Heaven, just as Jack Tanner in the subsequent scene will leave the Hell of his revolutionist life to enter the Heaven of marriage to Ann Whitefield.

Don Juan in Hell has fascinated many people because they believe it contains Shaw’s own philosophy in dramatic form. However, Shaw was an entertainer first and foremost, who adopted outrageous poses and shocking opinions to entertain through contrarianism. Even though his characters, especially Don Juan/Jack Tanner, advocate ideas usually associated with Shaw – the Life Force, and  the Superman, to name but two – one should avoid what critic Albert Bermel calls The Spokesman Fallacy:

The Spokesman Fallacy presupposes that a play tries to resolve issues when, as a work of art, it does nothing of the sort. A play AIRS issues. It illustrates their complexity by looking at them from several viewpoints, none of which is necessarily the author’s or – to turn things around – all of which are necessarily the author’s. The playwright’s only spokesman is the play, the whole play and nothing but the play. 1

Shaw is an artist of the theater and so, unlike a propagandist, will sacrifice any idea for the sake of his art. The joy of Shaw is seeing him lampoon the very idea you had just identified as his own! Shaw’s brain is wired for comedy. Philosophy, sociology, religion, and politics were merely his tools. Bernard Shaw was the original equal opportunity entertainer – all sides will eventually come in for his ridicule, even the side most people associate as Shaw’s own!

Like the original Paul Gregory Quartette which played Don Juan in Hell in American during the 1940s and 50s, the Shaw Chicago Quartette of Robert Scogin play without the aid of costumes or scenery, and still fully engage the audience’s heads and hearts. Richard Marlatt (the Commander) can be counted on to present common sense in all its uncommon humor, Jack Hickey (The Devil) presents an irresistibly charming host to the hottest place in town, Christian Gray’s (Don Juan) earnestness, and passion and conviction makes one almost wish his arguments held water. But it is Mary Michell’s Dona Ana who wins our hearts as Ann Whitefield does Jack Tanner’s. Her charm, good humor, patience, and bemusement with all the little boys having fun with their cute little ideas is impossible to resist.

In 1953 Felix Grendon reviewed Charles Laughton, Charles Boyer, Cedric Hardwicke, and Agnes Moorehead for the Bulletin of the Shaw Society of America. He concluded his review by saying “the Four played the mediumistic part of their art for all it was worth, and thereby scored a triumph the Quartette richly deserved.”