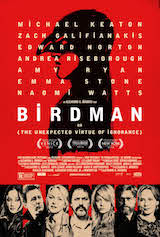 But Birdman is deliberately unlike other films:

Birdman seeks to have no meaning.

That’s right. The artists deliberately conspire to lead the audience to believe they are watching a profound meditation of all of our favorite literary themes – authenticity, identity, illusion, reality, family, fame, etc. – while  using the audience’s burning desire for meaning to sustain their interest in the film and create a film without any meaning whatsoever.

Aside from the meaningful themes, the film is loaded with actors playing roles onstage and off, caught between stage and screen, family and fortune, suicide just a scene away. Rooms hold provocative objects – the head of a Hindu god, for example. Characters do unnatural things – levitate and wield the power of telekinesis. Reporters quote Roland Barthes, leading hip audience members to begin to ponder whether Birdman is a “readerly” or “writerly” “text”.

The creators’ true intent sneaks out in two ways: the so-called Susan Sontag quotation attached to the hero’s mirror – “A thing is a thing, not what is said of that thing,” and the Macbeth soliloquy narrating the hero’s walk through Manhattan – “a tale told by an idiot, full of sound and fury, signifying nothing.”

The artists of Birdman are anything but idiots, but they have created a film full of great artistry and technique signifying nothing.

Birdman is simply Birdman, not what is said of Birdman.

To paraphrase Archibald Macleish’s Ars Poetica, the creators believe Birdman should “not mean, but be.”

As critic Glenn Kenny has said, “Birdman [has] to be one of my top movie going experiences of 2014.”