Man and Superman: Audience Wins This Battle of the Sexes 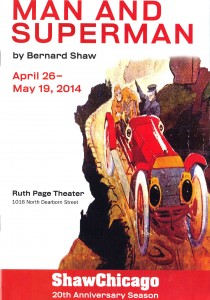 With his parents having the kind of marriage they did, George Bernard Shaw grew up determined to avoid marriage. One of his first novels The Irrational Knot, written as a 24 year old, was an attack on the “villainous institution of marriage. “ Shaw preferred dalliances with married women. Partly to justify his growing reputation as a “ladies man,” Shaw wrote “Don Giovanni Speaks” (1887) a short story in which the world’s most infamous lothario blames the seduced women –“I never fell in love with them-I earnestly endeavored to recall them to a sense of their duty, and inflexibly resisted their advances.  .Experience has taught me that people who are much admired  often get wheedled or persecuted into love affairs with persons whom they would have let alone.” Don Juan, like Shaw, was to be seen, contrary to history, as more sinned against than sinning.

Then came Charlotte Payne Townsend. Shaw exclaimed, “What am I to do: she won’t stay away” He tried telling her he was “not a marrying man”, while at the same time advising her that “my advice to women was always to insist on marriage, and to refuse to compromise themselves with any man on cheaper terms.” Charlotte took his advice and proposed to him.  The playwright threw in the towel and married her.

In 1903 Shaw’s Man and Superman would echo the scene

Tanner: Yes, nobody has asked me; but everybody treats the thing as settled, it’s in the air. When we meet, the others go away on absurd pretexts to leave us alone together….I have a frightful feeling that I shall let myself be married because it is the world’s will that you should have a husband.

Shaw had to blame someone or something else for marriage. Scholars then (and now) search high and low for a concept to let them avoid crediting God for anything. In Man and Superman it is the notion which Shaw got from the German philosopher Frederic Nietzsche and the French critic Henri Bergson called “The Life Force”.  For these men the world was in the thrall of the Life Force which worked its will making better and better human beings, known as the Superman.

Shaw had, consciously or unconsciously, the good sense to put the cockeyed philosophy in the mouth of a suave comic blowhard, Shaw’s hero, Jack Tanner, a literary descendant of the original Don Juan.  As an opera critic Shaw knew that the successful comic operas had, as their substructure, the characters and plots of the Italian Commedia Dell Arte. Man and Superman follows their example, while hiding the comedia architecture beneath an Ibsenite social surface.

Man and Superman features two pairs of lovers innamorati  – Violet Robinson and her secret husband, the American Hector Malone , and Violet’s brother , the sensitive playwright, Octavius, in love with Ann Whitefield, recently bereaved by her father’s death. Ann’s mother serves as the LaRuffiana, frustrating Octavius’ plans for Ann. The other comic parent figures are Roebuck Ramsden, the man assigned by Ann’s father to share her guardianship, and Malone, the Irish millionaire father of Violet’s husband.

Shaw’s brilliance occurs as he places Jack Tanner, the radical reformer. and the the secret object of Ann’s affection, in the position of her co-guardian with Ramsden, the arch-traditionalist. Tanner combines the handsome inamorato with the foolish Dottore, the gasbag know-it-all.

The rest of the cast serve as the zanni – comic servants: Henry Striker, Tanner’s chauffeur and, unbeknownst to him, the father of Mendoza’s love. Mendoza is a former London waiter, now a professional brigand.

While building his characters on stock types, Shaw upends the expectations. Ann, a Victorian woman-on-a-pedestal, is a secret Diana the huntress stalking her prey, Jack Tanner. Mendoza the highwayman is revealed to be a love-sick sentimentalist. The American industrialist prefers a business-savvy mate for his son  to a poor titled aristocratic lady.

Shaw is rarely performed because a theater company looking to stage Shaw needs a lot of knowledge and a lot of skill. Even though he is recognized as second only to Shakespeare among English language playwrights, few cities in the world have a theater devoted to the plays of Shaw.

Chicago is one of those cities.

And what actors inhabit the characters of this Man and Superman! Like Shaw, Mr. Scoggin uses the same actors repeatedly so that they develop a familiarity, with not only the director and with one another, but with the nature of Shavian theater itself. The first actor we encounter is Richard Marlatt playing Roebuck Ramsden. Mr. Marlatt is a force of nature. He plays with an intensity, a conviction, and a gravity which is wondrous to behold. And laugh out loud funny. His performance illustrates perfectly how Shaw places a commedia type in the heart of an Ibsenite character. Totally believable and totally hysterical. Octavius Robinson is played by the amazing Gary Alexander. If Mr. Marlatt has an endless supply of cocksure moralists, Mr. Robinson has a bag equally full of winsome, sensitive, heartbroken, and fearful young men. He is a joy to watch as the man ill-suited to marry any woman. Jack Hickey embodies hearty common sense and good-naturedness as Henry Straker. He makes a very difficult role look easy. Michael Perez handles the long arias of the Jewish Spaniard Mendoza with panache. Skip Lundby and Christian Grey, as father and son Malone, capture the essential  otherness of Americans abroad without falling into cliché land. Jhenai Mootz retains Saint Joan’s steel determination but moderates it wonderfully into a seemingly coy English lass. Mary Michell as Mrs. Whitefield has such a strong and compelling stage presence that one wishes Shaw had given her a larger role.

Finally, any Man and Superman depends on the combatants in the stage’s greatest Battle of the Sexes, and ShawChicago has world-class combatants in Doug Mackechnie and Lydia Berger Grey. Mr. Mackechnie is confronted with a character who never shuts up, who thinks himself very interesting, who has at least one opinion on every subject, and who will happily advise  anyone on what to do in any situation. In real life we would head for the door when with such a fellow. With Mr. Mackechnie, however – we can’t get enough of him as Jack Tanner. Think Cary Grant in The Philadelphia Story and you begin to understand Mr. Mackechnie’s charisma. Faced with this Jack Tanner, Ms. Grey’s Ann Whitefield wisely employs Mohammed Ali’s Rope-a-Dope strategy – she patiently and lovingly lets the windbag talk (punch) himself out before she makes her move. Ms. Gray hits Shaw’s verbal nail on the head:

“Ann is the Mother Woman. She is not an artist aiming at the production of poems & romances like Octavius, or at the formation of a philosophy of life, like Tanner. She is not a moralist, like Ramsden, nor a sensualist like nobody in the play. She is a breeder of men, specialized by Nature to that end and endowed with enormous fascination for it.”

Kate and Petruchio, Beatrice and Benedict, Mirabell and Millamant, Ann and Jack; wooing has never been more fun than in Bernard Shaw’s Man and Superman as directed by Robert Scoggin and ShawChicago at the Ruth Page Theater. You won’t find a more enjoyable time in the theater.