A NIGHT ALIVE: A Night Not to Be Missed 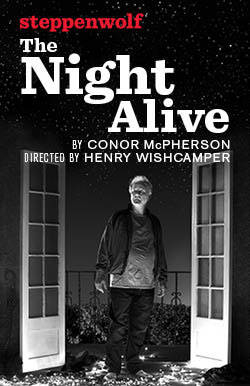 Tommy (Francis Guinan) and Doc (Tim Hopper) in Conor McPherson’s wonderful new play, The Night Alive, come from a long line of cockeyed Irish buddies. From O’Casey’s Captain Jack Boyle and Joxer Daly to Ralph Kramden (Jackie Gleason) and Ed Norton (Art Carney) the procession of stage Irishmen descend from the classic comedy types of the bomolochus (simpleton) and the alazon (schemer), whose days are spent dreaming, planning, drinking, and philosophizing, usually to no effect other than their own mortification.

Tommy lives in a room at his uncle Maurice’s (M. Emmet Walsh) house, separated from a wife who has turned his children against him. Maurice is the man who raised Tommy; Tommy is all Maurice has. Doc is Tommy’s hired man in their odd job business. Doc usually comes in through the window to crash at Tommy’s place.

The trio’s inconsequential lives are interrupted at the play’s outset when Tommy brings back to his room a young girl, Aimee (Helen Sadler), he has rescued from a beating at the hands of her boyfriend, Kenneth (Dan Waller). With this action Tommy unconsciously assumes a new role in life – knight. (The oddness of the moment is confirmed as Tommy, Doc, and Aimee salute Marvin Gaye’s profound hymn, “What’s Goin’ On?’ with song and dance.) Tommy becomes a Dublin Don Quixote in the ensuing action, casting Doc as his reluctant Sancho Panza. Tommy, without realizing it, has embarked on the pursuit of what was once known as “courtly love.”

Since glorious stage diction, (and Mr. McPherson’s is certainly that), is often homophonic, Tommy is the Knight Alive in the Night Alive.

All the key elements are present for courtly love: Tommy professes an agape-type love for Aimee (love); Tommy displays nothing but humility before his Lady Fair; since Aimee already has a boyfriend and Tommy is already married, their relationship has the necessary adulterous dimension; and self- sacrificing love almost becomes Tommy’s religion as he places Doc’s wounds and needs above his own.

Kenneth serves as the Black Knight challenging Tommy for the right to Aimee’s hand. In the course of their chivalric contest, Doc, the comic servant type, gets his pate beaten, in classic medieval fashion.

But does Tommy-the-modern-knight prevail? It seems not. Then, Doc relates two dreams featuring one of the Wise Men from the Nativity Story. The dreams  confirm to Doc the existence of God and the fact that death is simply the glorified continuation of our present lives. As Doc decorates the room with Christmas lights, Tommy, the hitherto slob, unwraps his newly dry cleaned laundry, and the previously suicidal Maurice begins to plan for a garden patio! Aimee, whom all had considered long gone, suddenly walks in the door and the world is bathed in Procol Harem’s “A Whiter Shade of Pale,” with the song’s overtones of both sexual fulfillment and death.

Maurice, Tommy, and Doc – our Father, Son, and Holy Fool – have been touched by grace, blessed by mystery. The playwright says in the program, “the unknown is God. It’s the all powerful thing you can’t know. I find something very comforting in that. But I don’t think belief is ever really based on arguments or reasons. It almost can’t be articulated really: that’s why you have to do a play”1

And what a production Steppenwolf has given!

The casting is perfection. Francis Guinan, Tim Hopper, and M. Emmet Walsh have crafted men from the shadows of society with love and respect, allowing the audience to empathize with each in their struggles, hopes, frailties, and joys. And the actors have a great knack for handling poetic language as the natural expressions of characters with poetic souls. Henry Wishcamper has directed with the utmost sensitivity to story and character, letting Mr. McPherson’s poetry and imagery flow naturally from the unfolding action. It is beautiful to watch happen on Todd Rosenthal’s gorgeous piles of junk, under the magical light of Keith Parham, and to the crucial soundtrack of Richard Woodbury.

Anyone who bemoans the state of contemporary theater, whining that “they just don’t write plays as good as they used to”, hasn’t been to the Steppenwolf Theatre Company to see Conor McPherson’s The Night Alive.