THE COURT THEATRE’S THE MOUSETRAP: NEAR PERFECTION 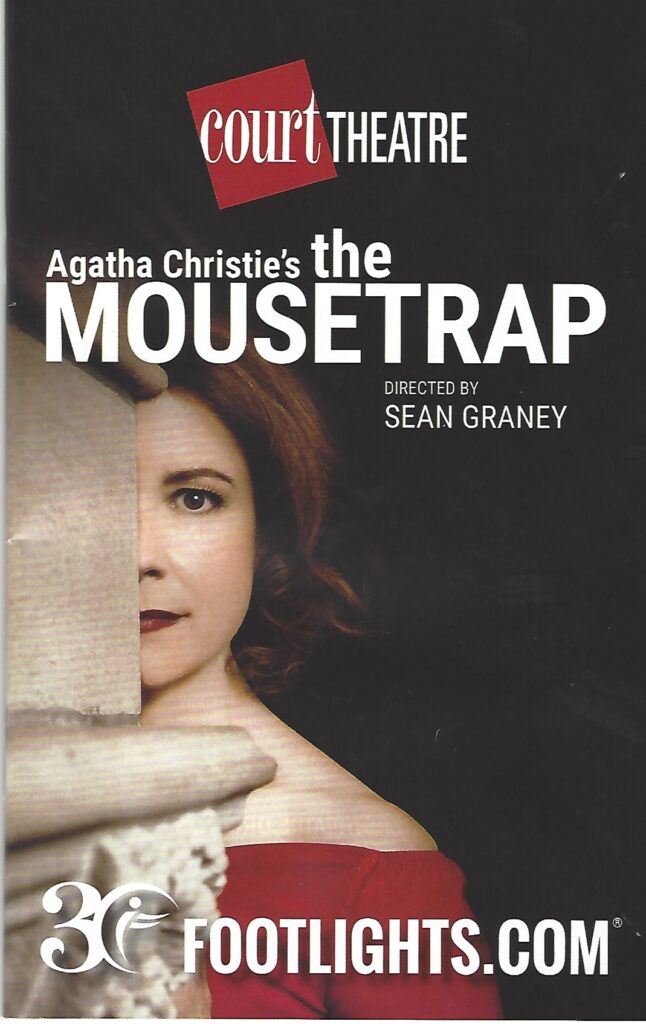 In the late 1920s, mystery writer Ronald Knox published  “Ten Commandments for Writing Detective Fiction.” With her monumental play The Mousetrap, Agatha Christie violated the central commandment. (to reveal that commandment would be the ultimate spoiler.)

Dame Christie’s flaunting of the detective mystery norms may account for the play’s record setting run. The mystery has played continuously since November 25, 1952.

The most famous plays are detective mysteries. Oedipus Rex concerns identifying and punishing the person responsible for the plague ravaging the region. The action of Hamlet focuses on the title character’s search for the murderer of his father.

Based on the real-life case of the death of a boy, Dennis O’Neill, who died while in the foster care of a Shropshire farmer and his wife in 1945, The Mousetrap began as a 45 minute radio play, a gift to Queen Mary who had asked for a new Agatha Christie to celebrate her 80th birthday.

When asked to explain the success of her record-breaking play, Agatha Christie said,

It may be  the sort of play you can take anyone to, but it is not the kind of play that anyone can direct with the brilliance of Mr. Sean Graney. I first saw Mr. Graney’s work in 2013 at Steppenwolf’s Garage Theater . His production of Gilbert and Sullivan’s Mikado was a revelation and a true delight. Almost alone it confirmed my belief that Chicago was, and is, the theater capital of America.

Now with the Mousetrap, Mr. Graney turns his attention to creating a clockwork precise production which masterfully blends just the right amount of fright, horror, and farce. Every plot point, every decision, every discovery, every reversal is played with both loving care and astute theatricality. Every actor gives a full-bore performance, almost daring any subsequent players to do better. It is grand heroic acting of the first rank. Kudos to the casting director Becca McCracken for giving Mr. Graney such fine artists with which to create.

The costumes are magnificent extensions of the wild and wooly characters. Brits seem to fall into either of two categories – stodgy dull bores or goofy eccentrics. Mr. Graney’s actors  fall into those categories as well. Among the goofiest is Alex Goodrich, the aggressively offensive Christopher Wren.  Looking as a twin to California talk radio host, Ethan Beaman, Mr. Goodrich mined every bit of legitimate humor and sinisterism in the character. Tina Munoz Pandya offers a tomboyish Miss Casewell, while David Cerda presents a bizarre but believable Mr. Paravicini, who seems to embody all nationalities and genders.  Carolyn Ann Hoerdemann gives Mrs. Boyle an insufferable, ever-carping, soul. Lyonel Reneau masterfully plays Major Metcalf as a foreign military person who at the core is just a local Cockney bloke.

Among the “normal” characters are Allen Gilmore as the ever-so-proper English gentleman B and B keeper Giles Ralston. His wife, Mollie Ralston, is played by the charming Kate Fry as a Myrna Loy-like heroine as if from Mr. Blanding Builds His Dream House. She makes the character one of the play’s two delightful fulcrums. The other is the Detective Sergeant Trotter of Eric Hellman. Mr. Hellman had impressed me last as Cliff in 2014’s Luna Gale.  Here he shines as the epitome of the drab yet efficient Scotland Yard investigating officer. His alter ego emerges as stunning and profound, even to those familiar with the play. The dialect design of Eva Breneman must be singled out for service above and beyond the call of duty.

The production gets extra verve from the costumes of Alison Siple. The inner oddness or inner blandness of each character finds their true skin in her bold costumes, which must stimulate the actors looking at them as much as the audience watching the play.

Arnel Sancianco’s scenic design provides the requisite acting areas and set pieces, though the place doesn’t resonate as a real location just a few miles from London. Details are also a bit askew. The chandelier seems  too high and the portrait over the fireplace has a head too large for its purpose. The too-new but mismatched contemporary upholstery choices, while bold like the costumes, work against the notion of a seedy English manor.

Nevertheless, The Court Theater has produced a real winner this time. Popular with the audience, magnificently acted and directed, fun to watch, and a confirmation that Chicago is indeed the place to be to see the finest theater.