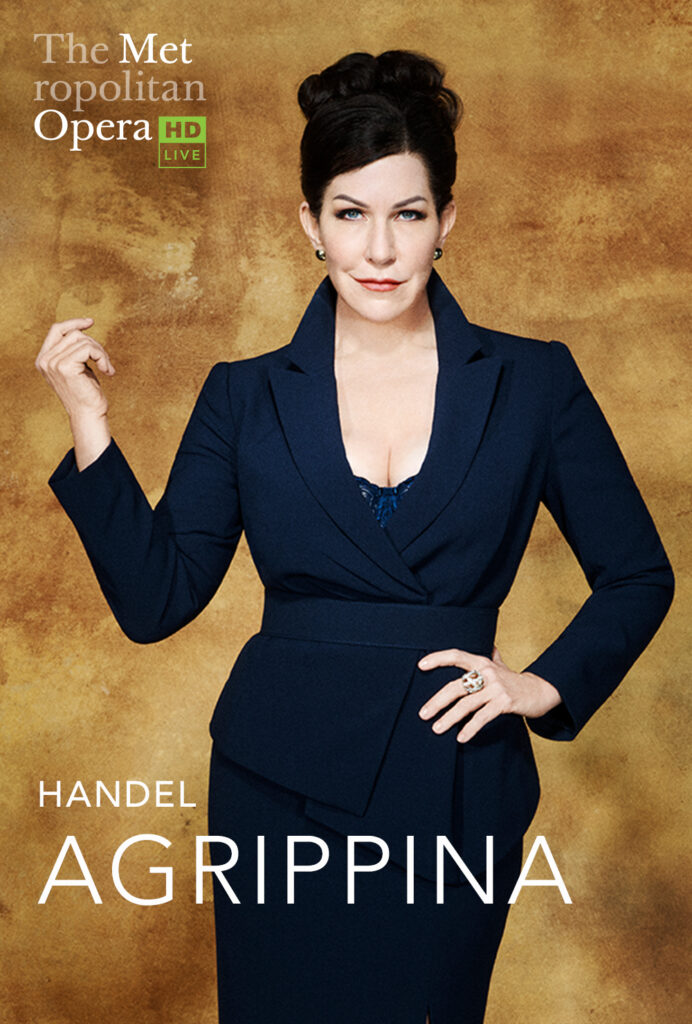 Librettist Vincenzo Grimani had a wonderful idea for a comic opera: a neo-classical comedy of manners featuring history’s most monstrous tyrants as the main characters! The comic incongruity would be enormous, as  the murderous, depraved butchers of Rome’s ancient past acted with impeccable decorum and good taste. Imagine seeing Nero and his court in a work upholding virtuous action! Set in the world of Handel’s elegant Neo-Classical music world, the idea was worthy of Monty Python.

Both audiences enjoyed the fine libretto by a witty and urbane diplomat who was also a Cardinal of the Roman Catholic Church, Vincenzo Grimani.  It is one of the finest librettos Handel would ever set to music. Cardinal Grimani had recently been appointed Viceroy of  Naples. In fact, the opera was produced in one of the  Grimani family’s opera houses,  Teatro di San Giovanni Crisostomo. Handel biographer Christopher Hogwood describes the plot:

“a black comedy, based loosely…on ancient Roman history,…laced with  cynicism and irony: in  place of the ‘rough old Roman’, a comic bass portrayal of the pompous and amorous Emperor Claudius; the only ‘squeaking Eunuch” a virtuoso singer in the part of  Nero as an ambitious adolescent, not yet  the power-drunk monster of history; the one tragic and heroic figure in an otherwise dissipated company, Ottone, sung by a woman; a pair of unscrupulous henchmen; the sex-kitten Poppea with three suitors at one moment hidden behind screens in her bedroom; and towering over all, the dominating and amoral figure of the Empress Agrippina, devoting a complete scena to plans for  triple murder.[i]

At the opera’s conclusion, the audience leaped to its collective feet and shouted, “Viva il caro Sassone!”- “Long live the beloved Saxon!” The success of Agrippina established Handel’s international reputation and recognized him as a master of his craft.

Young Bernard Shaw, when he was a fledgling music critic saw in George Frederic Handel, what subsequent generations  would come to admire:

Handel is not a mere composer in England: he is an institution… If Doctor Johnson had been a composer, he would have composed like Handel…It was from Handel that I learned that style consists in force of assertion. If you can say a thing with one stroke unanswerably you have a style; if not, you are at best a marchand de plaisir; a decorative litterateur, or a musical confectioner, or a painter of fans with cupids and cocottes. Handel has this power.[ii]

Handel and the Baroque, or Neo-Classical ideal, were almost synonymous as denoting a particular musical style. So famous in his time, according to historian Jan Swafford, “Handel was something on the order of an international superstar, an opera composer and impresario and travelling virtuoso.”[iii]

His works for the stage were opera seria, “historical stories about royal clemency and charity, the music an alteration of mostly da capo arias and choruses during which the drama came to a halt, while the story was told in long stretches of recitative secco, “dry recitatives”, accompanied only by harpsicord:

There was a great emphasis on vocal virtuosity –you had to keep your divas happy. Some leading roles were taken by castrati, men who had in youth been subjected to the eponymous barbaric operation to preserve their high voice. [It was a practice with a long history, beginning in Italy, probably in the fourteenth century, to replace the female voice which had been banished from choirs in the Catholic Church] It all made for a dramatically static spectacle, and it took exceptional music to raise it beyond that.”[iv]

In sum, Agrippina was a career-making  comedy of manners featuring, of all people, a few of the most notorious actual monsters of history’s ancient world.

The audience saw the ancient characters dressed mostly as they expected the historical figures to look. Not because the director of the production had a “concept” about making the old world relevant with contemporary clothing, but because the excavations of Herculaneum (1709) had not yet awakened the study of the archaeology of costume, clothing, and accessory. For the most part, the world continued the medieval notion that people had always dressed, more or less, as they do now.

Consequently, the players wore the fashions of the early 18th century, with an occasional accessory to suggest ancient Rome , the “habit a la romaine, a combination of Roman toga, powdered wig, and plumed headdress.”[v]

The Metropolitan Opera’s audience saw contemporary dress, (or undress), as the case may be, as well, but with no accessories referring to the ancient past from which the story derives. The elephant-in-the-living room question is: why would contemporary people be named after the monsters of history? A lone reader of Tacitus in the opening mausoleum is supposed to clarify the concept. Heeding Bertolt Brecht’s dubious maxim that “tradition is humdrum,” the director, Sir David McVicar, deliberately chooses the contemporary world of 2020 in which to set his action, passing on both the ancient Rome of 50 A.D.  and  eighteenth century Europe. The imaginative world of the stage always needs some connection to reality, or it would cease to be imaginative and would move into madness. 20th century politicians named after Roman despots and sadists has no basis in anyone’s reality

McVicar’s choice has a consequence: The Venetian audience would have heard  music which they recognized as modern  or contemporary. The Metropolitan Opera’s audience experienced Handel’s music, not as a contemporary sound, but as “classical”, whatever that may mean.

When a visual experience clashes with the auditory experience, an audience experiences a disconnect. Such a disconnect was sought by the German author and director Bertolt Brecht who called the phenomenon  the “Alienation Effect”. Brecht wanted each production element to  comment on the action in a different way.[vi] He wanted the audience to be alienated from the characters, not swept up in any empathetic response. He wanted his audience  to retain a dispassionate frame of mind with which to judge the action and behavior of the characters. He hoped his audience would thereby arrive at the communist view of life which he held.

The composer Kurt Weill, often Brecht’s musical collaborator, recalled that Brecht insisted that  music work against the plot and characters and their emotions.[vii] This is what happens in Sir David McVicar‘s production of Agrippina.

The difficulty is that Handel and his theatre cohorts wanted exactly what Brecht hated – the Handel audience should lose itself in the action, swept up in the emotions of the story, suspending all disbelief and judgement. Too many in the audience for McVicar’s Agrippina need to close their eyes to endure the production.

The Metropolitan Opera, through the direction of Sir David McVicar has a production more attuned to the Brechtian aesthetic than that of 18th century Handel. The clash of the Handel sound with the modern visuals works toward an alienating disunity, and an audience left to reconcile “classical” music with contemporary costumes, properties, and setting.

Handel’s’ audience was free, if it wished, to find similarities between the Romans’ behavior and their own Venetian politicians. They were also free to see Rome as just Rome without making any contemporary references.

Sir David’s audience is not allowed such freedom. His choices  regarding the opera’s social and political relevance dictate how Handel and Grimani’s Roman story must been taken:  it must be seen as an emblem of our current social and political situation. No room is allowed for a different view.

I have admired Sir David’s recent productions – his Metropolitan Opera stagings of Adrienne Lecouvreur, Il Trovatore, Tosca, and Norma, as well as his Lyric Opera of Chicago productions of Wozzeck and La Clemenza di Tito were wonderful examples of how works can be made “relevant” by respecting the text and the authors’ vision.

After jettisoning the comic idea upon which the wonderful libretto is based, McVicar plasters over the action a lewd and distasteful sex farce, emphasis on the sex. No Handel opera has ever had the disgusting bits of stage business found in the Met production. History was, unfortunately, made.

Some day a brave singer-actress will file a “Me Too!” complaint against a regie director who exploits women by humiliating and demeaning them night after night before thousands of people, under the protection of a “concept.” Enough is enough.

Perhaps the money spent on opera tickets could go toward a state-of-the-art audio system, or sent to organizations like the Chicago Symphony Orchestra where brilliant conductors like Riccardo Muti lovingly presents concert versions of classic operas, free from high concept visual desecrations

But what about the music the Met produced?

It was hard to tell due to the distractions. The visuals of opera are there to enhance the sound, not to compete with it. Only when a singer found himself or herself alone onstage could one begin to appreciate their great musical abilities. Brenda Rae, Joyce DiDonato, Katie Lindsey, Iestyn Davies, Duncan Rock, and Matthew Rose deserve better.

In her autobiography, Renee Fleming discusses her work on a Handel opera with the music director, William Christie, who told her,

“The music made people swoon when it was premiered, People fainted. That’s what we’re going for.” He told me to bring everything I had to the score, every bit of expressive wallop I had, all the sex, all the jazz, everything. I kept nervously protesting, ”No, no, no. Wait you can’t be telling me this. You can’t mean that. This is not stylistically correct.” But he insisted, and so finally I tried to sing as I would jazz, bending a phrase here, flattening out a note there. I would begin a tone without vibrato and then add it later on…The end effect was successful, because we were willing to risk failure by opening up.”[viii]

The only swooning evident at the Met production of McVicar’s Agrippina  were those swooning in disgust as they headed to the exits.