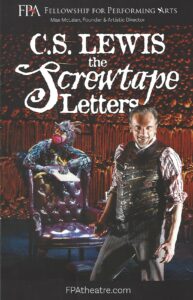 “There are two equal and opposite errors into which our race can fall about the devils. One is to disbelieve in their existence. The other is to believe, and to feel an excessive and unhealthy interest in them. They themselves are equally pleased by both errors and hail a materialist or a magician with the same delight.”  – C.S. Lewis

According to the Barna Group, the majority of Christians do not  believe that Satan or the devil actually exists.

On the other hand, C. S. Lewis believed that Satan is not merely a superstition or a metaphoric trope. For Lewis, Satan, and his cadre of demons, actually exist, and seek to work his ways.

At the core of his advocacy of what he called “mere Christianity’ was Lewis conviction about the nature of Satan. Lewis tirelessly worked to dispel the popular caricature of the Enemy as red, horned, and tailed,  frolicking about like cartoon villain.

To C.S. Lewis, Satan was, besides being inordinately beautiful and appealing, especially clever and smart.

The Screwtape Letters was written, in large part, to replace the popular trite cartoon image of Satan with one of a master Schemer, a moral chess player, well-versed in logic and strategy, with an acute understanding of human psychology.

By limiting his Satan to words on a page, Lewis focused his audience’s attention to Satan’s mind, allowing each reader to conjure up in his own imagination a personal physical and auditory representation appropriate to the words his mind’s ear was hearing.

The book was an immediate international best-seller

“The volume has suited the well-bombed British who regard it as a backhand volley that wins the point for religion. What the New World thinks of it remains to be seen.”

Within six months of publication, The Screwtape Letters entered its 6th edition.

Not surprisingly, other media tried to get in on the Screwtape bandwagon. In 1947 20th Century Fox,  through David Selznick , offered Claire Booth Luce $ 100, 000 to write the screenplay. Hedda Hopper reported that Clifton Webb was set to play the Devil.  As late as 2008 Walden Media expressed interest in a film version

Thomas Nelson publishers issued a comic book version in 1994. In 2008 Focus on the Family aired a radio adaptation.

And with the efforts to give an auditory and visual dimension to Lewis’ reconfigurations of the denizens of Hell, the old stereotypes made a comeback. The very  cartoon images which had motivated Lewis to write his work, now took control of his work. And in the process, the undermining physical representations destroyed Lewis’ hope of presenting an actual living and breathing, seriously formidable,  Satan to the world.

The process of undoing Lewis’ creation involved the stage as well. (After all, Satan was the very first actor, having successfully portrayed a Serpent to Eve in the Garden.) Stage adaptations of The Screwtape Letters began in 1961 with one penned by James  Forsyth. The Fellowship of the Performing  Arts received permission from Lewis estate in 2006 to create another stage version.

The current production of The Screwtape Letters has been adapted for the stage by Max McLean and Jeffrey Fiske. The first interpretive question any adapter should ask is when and where does the action of the play take place? Lewis’ book was created as a contemporary one for his wartime 1940s London. The characters spoke as if living at that time, but with few time-bound references so as to give the work a universal appeal. So, should the stage version reflect the contemporaneity of the work by setting the action in the today of 2019? Or should the audience see and hear the echoes of 1940s London?

The current production doesn’t seem to want to decide.

Pre-curtain metallic rock music suggests the contemporary option, but the stage setting, costumes, and properties seem archived from the 1940s. Screwtape himself speaks with a pseudo-British accent, aping what some, but certainly not all,  readers may imagine when reading the book. To confuse the time and space matters even more, Screwtape reads a biography of the contemporary pop star Madonna and pantomimes clicking a remote control!

The Screwtape  presented is the image of the stock 19th century melodramatic villain, the exact type of personification Lewis sought to dispel from the popular imagination. Almost taking his cues from the nineteenth century inventor of the Vincent Price/Snidely Whiplash character invented by playwright Tom Robertson,

“With a black wig, black whiskers, black mustaches, black eyebrows, and a broad black line under each eyes, intended to represent black eyelashes, every trace of the good-humor of his face has vanished.”[i]

So much for getting us to take Satan seriously!

His minion, Toadpipe, is even more in keeping with the cartoon images Lewis sought to banish. She appears to be, and sounds as, a demon from a Disney version of The Exorcist.

So much for getting us to see devils and demons as actual human threats!

The actors are excellent. They do what they are asked to do with great skill and zest. Brent Harris’ Screwtape dominates the stage while the Toadpipe of either Tamala Bakksnsen or Anna Reichert (the program didn’t identify the performance’s player) displays her  mastery of the art of hideous vocal utterances.

Lewis text had to be edited to fit into the 80-minute production. I didn’t hear one of my favorite passages from The Screwtape Letters:

“The thing to do is to get a man at first to value social justice as a thing which[ God] demands, and then work him on to the stage at which he values Christianity because it may produce social justice. For [God] will not be used as a convenience”

The stage version of The Screwtape Letters confirms Lewis’ decision to write his story for the reader.