LYRIC OPERA CHICAGO : THE OLD BARBER HAS STILL GOT IT 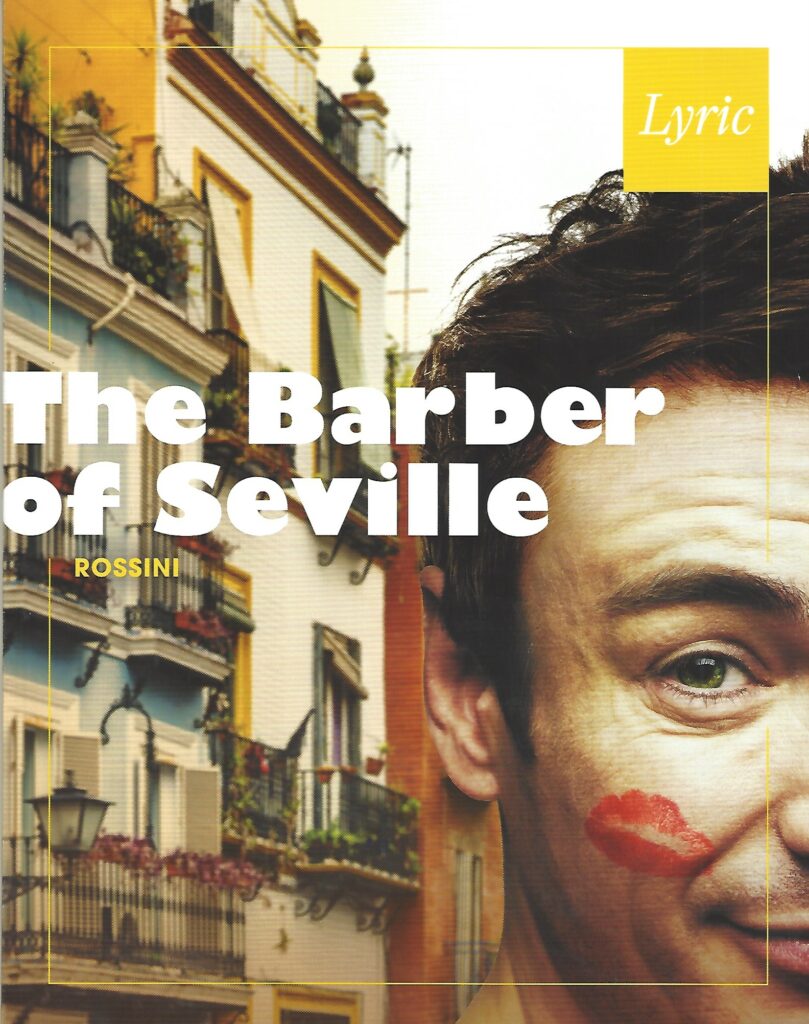 The history of what is popularly called Italian opera began in the United States with a performance of Rossini’s lyrical comedy “Il Barbiere di Siviglia”, The Barber of Seville. The place was the Park Theatre, then situated in Chambers Street, east of Broadway, and the date November 29, 1825.[i]

It was Manuel Garcia’s troupe that first performed “Il Barbiere di Siviglia” in New York, and four of the parts in the opera were played by members of his family.

The renowned dynamic Spanish tenor, Manuel del Popolo Vicente Garcia, (1775 – 1831) born in Seville,  was the head of the first family of Italian opera, and Rossini’s favorite tenor.  In fact, Rossini wrote the Role of Count Almaviva for him to debut. As a singer Garcia was  famous for crowd pleasing ornamentation. He possessed a voice deep enough to also play Don Giovanni. He was said to sing with “herculean force”

Towards the end of 1825, 79 year old Lorenzo Da Ponte , living in New York City, learned the Garcias  were coming to town.[ii]The family had been lured to cross the Atlantic by the wine merchant Dominick Lynch – “the greatest swell and beau that New York had ever known” – who set the tone and established the fashion in Manhattan society. At Da Ponte’s urging Garcia also presented his own Don Giovanni. Garcia had endeared himself to Da Ponte by singing the first lines of the “champagne aria” from Don Giovanni when they first met.

The company rehearsed for three weeks. The vocalists also  built the scenery, created the costumes ,  and recruited an  orchestra. In the opening night audience were novelist Fennimore Cooper, poet Fitz-Greene Halleck, and the exiled Joseph Bonaparte. Manuel, the father, was the Count, as he had been at the premieres in Rome, London, and Paris; Manuel, son, was the Figaro (he died at the age of 101 years in London in 1906). The twenty-year-old  played  Figaro with an “exhilaratingly clear baritone that deepened into a bass”. Junior would achieve fame as a legendary voice teacher, counting Jenny Lind among his pupils. (Nellie Melba was, in turn, a student of Jenny Lind.)

Signora Garcia, mere, was Berta, and Rosina was sung and played by that “cunning pattern of excellent nature,” as a writer of the day called the seventeen-year-old daughter Maria Felicita Garcia (1808-1836), Signorina Garcia, afterward  known as the famous Malibran.

“Malibran” was known for a stormy personality, and dramatic intensity. Maria was labeled by a New York critic as “the finest singer in Europe”, but she was first known as “The Signorina”.

Maria met and married a New York banker, Eugene Malibran, twenty-eight years her senior. Her father pressured her to marry for the 100,000 francs offered by Malibran. She agreed partly  to escape her tyrannical father. But soon after the wedding  banker Malibran declared bankruptcy and Maria had to support him. Billing herself simply as “Malibran” Maria left her aged and destitute husband after a year to return to Europe .

After herfailed marriageand while pregnant, poor Maria fell from a horse and was dead at age 28.

In retrospect, Rossini’s opera seems perfect to create an American audience for Italian opera. First, early in Act I Dr. Bartolo articulates what his audience feared – opera is boring and stupid. Having a compatriot on stage, the Americans could sit back and enjoy the antics of Figaro, the European version of the Jonathan they had enjoyed in Royal Tyler’s popular American comedy, The Contrast. Figaro was the common man, trying to make a living, a jack of all trades, looking for love and fun, trying to keep out of trouble. And aligned with no particular party or social class. He was what Americans thought of themselves; a lover of liberty and a foe of tyranny.

The opera’s simple plot derived from the stock characters of the ancient commedia del arte. Easy enough to follow, the plot follows the plotting of the old Pantalone to turn his young ward, the Inamorata, into his bride, while keeping her from her Inamorato, the young and dashing Almaviva. As in all commedia del arte, the comic servant Scapin, or Harlequin, works for the young lovers to thwart the plans of the aged geezer. Figaro is the opera’s Scapin, the perennial crowd favorite.

Lyric Opera Chicago ‘s revived production of  Rob Ashford’s 2012 production makes the Rossini work look easy. The opposite is the case. The libretto is filled with endless repetitions and musical interludes with little, if any, indication, as to how they are to be handled on stage. To say the characterizations are thin would be an understatement. The director of The Barber of Seville must bring a lot to the rehearsal table. And Rob Ashford has done that, as he had with his stunning 2017 Carmen, and the breathtaking  2015 Carousel. The Lyric’s Barber of Seville is in continuous motion, motion alternatively beautiful and hysterical. The characters have been fleshed out for maximum entertainment values by casting the finest of singers who are also, and equally important, masters of comic timing.

Leading the parade of stars is Adam Plachetka. An all time favorite of audiences around the world, Mr. Plachetka  will always be remembered for his 2016 Papageno at the Lyric’s stunningly original 2016 Magic Flute. As Figaro, Mr. Plachetka strolls through the action, looking for laughs, trouble, and a good time. He shares it all with the audience, which is always rooting for him. By turns, Mr. Plachetka is actor, singer, comic, comedian, showman, fool, sage, lover, trickster, magician, vaudevillian, jokester, conjurer, and always master of the outrageous ceremonies. It is a tour de force and a tour de farce.

Mr. Plachetka is ably abetted by his cohorts in crime. First, Lawrence Brownlee. Together with Mr. Plachetka they create opera’s most wonderful comic duo, an Abbot and Costello of the diva world. The synchronization of their comic timing is masterful, and the audience can’t seem to get enough of the pair’s antics. Nor of their singing. Mr. Brownlee dazzled the Lyric audience a few years ago, with Alessandro Corbelli, in Rossini’s Cinderella with bravura coloratura runs and loop de loops.

In this production he repeats the feat, while in constant motion.

The leading lady of all the action is a wonderful Rosina played by Marianne Crebassa. She, too, has impeccable comic timing and can motivate her glorious coloratura riffs with the physical actions she has been called upon to undertake. Never still, even her foot tingles in the embrace of the dashing Count Almaviva. The promise she showed  as Stephano in the Lyric’s 2016 Romeo and Juliet has blossomed into a beautiful star turn. Mathilda Edge flaunts her big bold voice as Berta and seems at ease with the stage business assigned to her. But the attempted “jump shot’ of a piece of clothing is unfortunately out of place in this production and mars an otherwise fine performance.

The settings by Scott Pask are stunning. A circular framework allows silhouettes and upstage actions as they cast the production with a special glow. Catherine Zuber’s costumes are, of course, lovely and character-defining, as well as conducive to all sorts of comic business.

The work of   a revival director is akin to the work of Michelangelo’s assistants who painted in the master’s outlines. This Barber of Seville is blessed to have a master revivalist in Tara Faircloth. She has found within Mr. Ashford’s vision and interpretation ways to keep things fresh and alive without drawing attention to herself. Together with Mr. Ashford, she makes this Barber of Seville both a masterful comic opera and subtle parody of comic opera conventions. The mixture requires a masterful hand to succeeded and the success is evident in the audience’s thunderous appreciation.

[i] From Chapters of Opera Being Historical and Critical Observations and Records Concerning the Lyric Drama in New York from its Earliest Days Down to the Present Time  by Henry Edward Krehbiel  (New York, Macmillan),1920

[iv] From the American Singer A hundred Years of Success in Opera. By Oscar Thompson New York: The Dial Press  1937