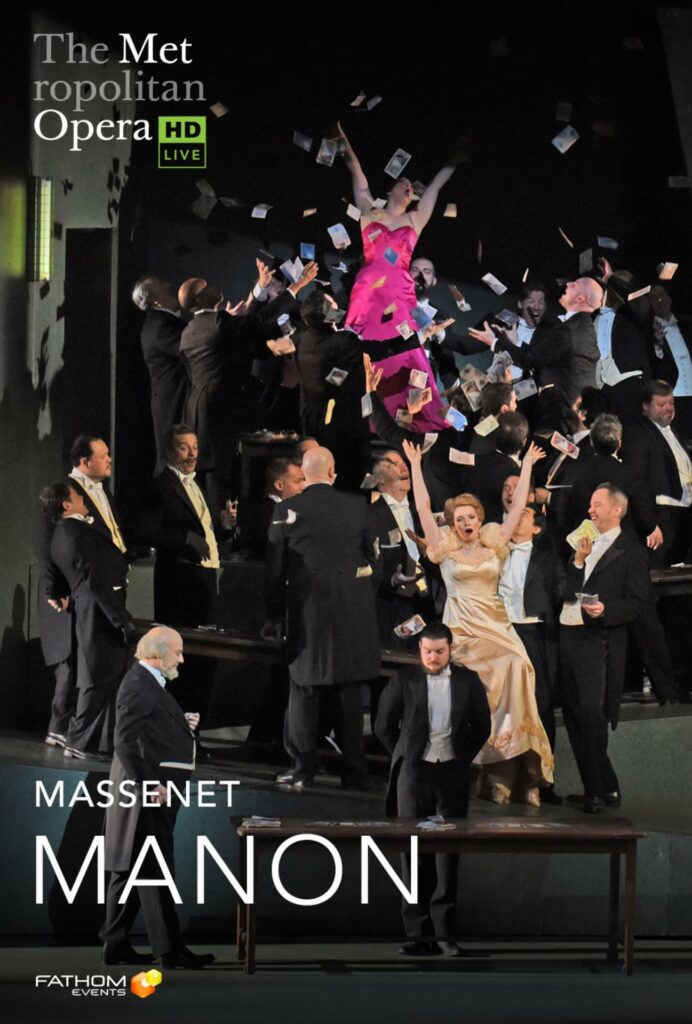 Jules Massenet (1842-1912) premiered  his new opera,  Manon,  on 19 January 1884 at Paris’ Opera Comique, the home to the city’s middle-class audience, an audience accustomed to the spoken dialogue featured in Massenet’s work. It was a hit. “Those who do not object on principle to being entertained in the opera house, rather than hectored, will always find a place in their hearts for Massenet.”[i]

The libretto was by Henri Meilhac and Philippe Gille, based on the Antoine-Francois Prevost novel,  L’Historie de chevalier des Grieux et de Manon Lescaut (1731), a work whose subject matter would come to inspire many operas. Interestingly,  Massenet wrote some of the opera while living in the very house in which the Abbe Prevost had resided. The composer changed some of Prevost’s tale  to make the  story more palatable for his audience.  For example, Manon’s brother became her cousin.

Manon is Massenet’s most performed work. The opera’s popularity is due to the title character, whose performance gives  dramatic sopranos a vibrant personality   to interpret according to their own lights, and with which to shine as an operatic diva. In fact, the success of Manon has depended upon the singing actresses cast in the lead role.

Manon  is called the “eternal feminine.” Maupassant referred to her “instinctive perfidy”, “sincere in her deception and frank in her infamy”

She is, in essence, the 18th century  male ‘s view of the seductive woman.

The first Manon was Marie Heilbron (1851-1886) She came out of retirement to play the role. When Massenet played the score for her, the actress was moved to tears: “It is my life…this is my life.”[ii]

Heilbron, 32 years old, managed to portray, convincingly, the 15-year-old character. She was an  actress known for her great beauty and physicality

When Heilbron  died during the run of the opera, Massenet closed the production. There was no Manon for ten years, until red-haired American Sybil Sanderson, a former conservatoire student of Massenet, revived the role. Massenet was impressed with  Sanderson’s  three octave range. She debuted in The Hague in the title role under the stage  name “Ada Palmer”

Sanderson was one of the few singers for whom the  composer granted permission to reconstruct his score to suit her needs. Sanderson even arranged for lessons to be given by Massenet himself. It was the beginning of a lifelong friendship. Tragically, the soprano  died at age 38 of pneumonia.  Massenet’s epitaph was, “She was ideal as Manon at the Comique.”

Mary Sanderson, Sibyl’s mother, would hold Sunday soirees in Paris. At one , attended by Saint-Saens, a newcomer named Mary Garden sang Saint-Saens’ “Les Cygnes.” Soon  a strong friendship developed between Sibyl and Garden. Two years later Sanderson befriended Garden after Garden was financially abandoned by her Chicago benefactors, Mr. and Mrs. David Mayer. Sanderson even  introduced Garden to Albert Carre of the Opera Comique in January of 1900. He offered her the position of standby for Louise. Mary eventually roomed at Sanderson’s house.

Garden’s hometown newspaper, the Chicago Tribune, of  20 July 1902, in an article entitled “Chicago Singer the Wonder of the European Operatic Stage” stated that Mary Garden “took Paris by storm” in the role of Manon. She had debuted the role  on 21 September 1901 at the Opera Comique. Her production ran for 72 performances. Then Garden debuted with the role at Covent Garden on 3 July 1902. (The first English Manon had occurred in Liverpool in 1885. Marie Roze was Manon. Reviewing the opera for  The Dramatic Review on  16 May 1885, music critic George Bernard Shaw found the music “pretty spirited, easy to follow, varied with considerable fancy and ingenuity, never dull, and only occasionally trivial and vulgar.”[iii]

Nevertheless, Garden was not impressed:

“I’m afraid I never cared for Massenet. I know how much the French adore him, and the French know how much I adore them. Massenet was the yes-man par excellence. Everything was ‘all right, fine, perfect.” He was always gushing. He could say the most marvelous things to someone, pay the greatest compliments in the world. And the moment the door closed behind that someone he would turn to the others in the room and say something quite the contrary.”[iv]

Upon her death, Sanderson bequeathed to Garden the diamond-tipped walking stick which Manon carries in the Cours-la-Reine scene. Garden eventually gave the stick to Grace Moore, who passed it on to Dorothy Kirsten.

Garden would drop Manon from her repertoire after leaving  Europe for America. She did, however, revive the role a couple of times in Chicago. At a January 1914 performance of Manon at the Auditorium Theatre Garden was seized by a case of vertigo which caused her to sink, almost unconscious, onto the  gold sofa in Act III. The chorus gathered around her during the rest of the gambling scene while Lucien Muratore , her des Grieux, sang the remainder of the song alone. After being helped to her dressing room, Garden was revived by a cup of coffee, and finished the opera. In a review, the Chicago Tribune’s Glenn Dillard Gunn noted that

“Miss Garden’s interpretation of Manon is not to be measured in fragments. It is not made up of an aria in one act or a great situation in the next. It is a sustained, logically developed characterization that profits by every resource of the actress. And is adorned and amplified by the equally comprehensive resources of eloquent song. Therefore, it could sustain the balance of the performance.”[v]

There was a really brilliant audience in the Metropolitan Opera House last night. In ordinary circumstances one might have been justified In supposing that an opera which is so unfamiliar to the average operagoer in this city as to be practically a novelty had called out this audience. Massenet’s “Manon” was heard once in the course of the quondam Col. Mapleson’s reign at the Academy of Music, but it has since been conspicuously absent from the repertoire of opera in this city. Yet there does not appear to be good ground for supposing that the work alone could have called out such an audience on such a discouraging night. There was additional attraction in the matter of Miss Sybil Sanderson’s first appearance as a prima donna in her native land. The audience was present mainly to hear a singer of Parisian repute in one of her favorite roles and, incidentally, to hear Jean de Reszke in a new part, for last night he sang the Chevalier des Grieux for the first time. Miss Sanderson’s debut was, of course, an interesting feature of the musical season and, judging from the shower of bouquets that fell upon the stage at the end of the first act, the audience had come prepared to make it an event. In all probability Miss Sanderson will have to suffer a little from the reaction that will set in after her immense advance puffery; but she may survive the ordeal. The opera may fairly claim the first consideration here, for the play, after all, is the thing.

Manon had been given on Dec. 23, 1885 at New York’s Academy of Music, with Minnie Hauck. Henderson explained:

The opera did not make a profound impression at that time, and that readily accounts for its lack of frequent repetition since. The reasons are not especially difficult to discover. In the first place, the story is without any element of strong human sympathy. This, of course, refers to the story as it appears in the operatic libretto. No one can by any possibility become deeply interested in a young woman who is so shallow, so vain, so frivolous, and so unimpressive as the Manon of this opera. She has no grand vices, no grand passions, no masterful follies. She is a Dresden-china sinner, an intriguing soubrette. And as for her lover, the pendulous Des Grieux, who is going into a monastery and who is going to marry, and who is going into the monastery again when his lady love runs away with another man, and who deserts it again at her first nod – who can care for him?

Nellie Melba, a fine Manon herself,  called Massenet “a perfectionist.” He never let anything pass, however slight; and if he did not like my singing of a phrase, he would go over it a hundred times.:[vi] Melba took her Manon to the Met on 27 January1896. Jean de Reszke again offered des Grieux. Critic Reginald De Koven enthused. He found Massenet’s Manon

“certainly a masterpiece, a lyric gem, admirable, well-nigh perfect of its kind. Somewhat “en miniature,” perhaps; somewhat too “fine” and delicate a picture, perhaps, for the large frame of the Metropolitan, but wholly delightful, and principally because it possesses the melodic spontaneity, the graceful, suave charm, the genuine emotional force and sincerity, which a work like “La Navarraise” lacks wholly. There is real inspiration in “Manon,” and the masterly use of the somewhat limited thematic material is artistic in the extreme. Massenet has indeed been rarely successful in grafting the principal of the “leit motiv” onto a purely lyric opera.

“The performance of the opera given last night was to my thinking even better than that of last year, and Mme. Melba in the title role covered herself with dramatic glory-the vocal has long since been hers-and fairly surprised even her most ardent admirers. After seeing her real feeling, dramatic sincerity and emotional power in the scene with Des Grieux at the close of the third act-the great moment of the opera-no one can claim with any semblance of truth or justice that Mme. Melba cannot act and act well, too.”

In March of 2012 the Metropolitan Opera offered its newest Manon, directed by the brilliant Laurent Pelly who, with designers Chantal Thomas, and Joel Adam, transposed the time from the 18th century to the time of Massenet himself. It was this production which reappeared at the Metropolitan in October of 2019 for the international live broadcast.

Pelly’s settings and costumes are  inspired by the work of Edgar Degas. In fact, the ballet, and the business surrounding the dancers seem to pay homage to the “ballet rats” immortalized by Degas in his sculptures and paintings of tiny Marie van Goethem. The beautiful settings incorporate strong diagonal platforms and staircases, allowing director Pelly to create dynamic moments, and vibrant stage pictures. Pelly’s  gorgeous costumes perfectly capture the garish, almost seedy,  elegance of the period.

The original Manon and des Grieux for Mr. Pelly were  the world-class opera stars Anna Netrebko and Piotr Beczala. Netrebko emphasized the youthful flibbertigibbet quality of Manon, as she seized on the party-girl life as a fish gobbbles up water. Her des Grieux, as do all des Grieux, found his character in reaction to the particular type of Manon with whom  the had to work. Consequently, Beczala was swept up in Netrebko’s beauty and devil-may-care attitude.

The entire 2019 cast, like the original 2012 Pelly cast, is first rate. The most recent Manon, Lisette Oropesa, focuses on the character’s calculating nature. For Oropesa, Manon is a serious navigator of Paris’ pleasure palaces, cautiously and relentlessly charting her course. For this Manon, the production’s des Grieux, the dynamic Michael Fabiano, finds des Grieux bent on protecting Manon from her worst instincts. With the Netrebko/Beczala duo Manon’s poignant “Adieu, notre petite table” resonated with the audience since most of their relationship had been played near, at, or on the table. When Oropesa sings the aria, the lyrics seem odd; the couple had never been near the table in question , choosing instead to play their relationship mostly on the fire escape staircase.  Also noteworthy is 2019’s Lescaut, Artur Rucinski, who brings a memorable stage presence and clarion voice to the role.

Lisette Oropea, like her forebears in the role, presents  Massenet’s  “eternal women” with such virtuosity that the fascinating opera remains a vital part of the world’s operatic repertoire.