THE NT LIVE’S ANTONY AND CLEOPATRA : WHEN ONE CHOOSES LOVE 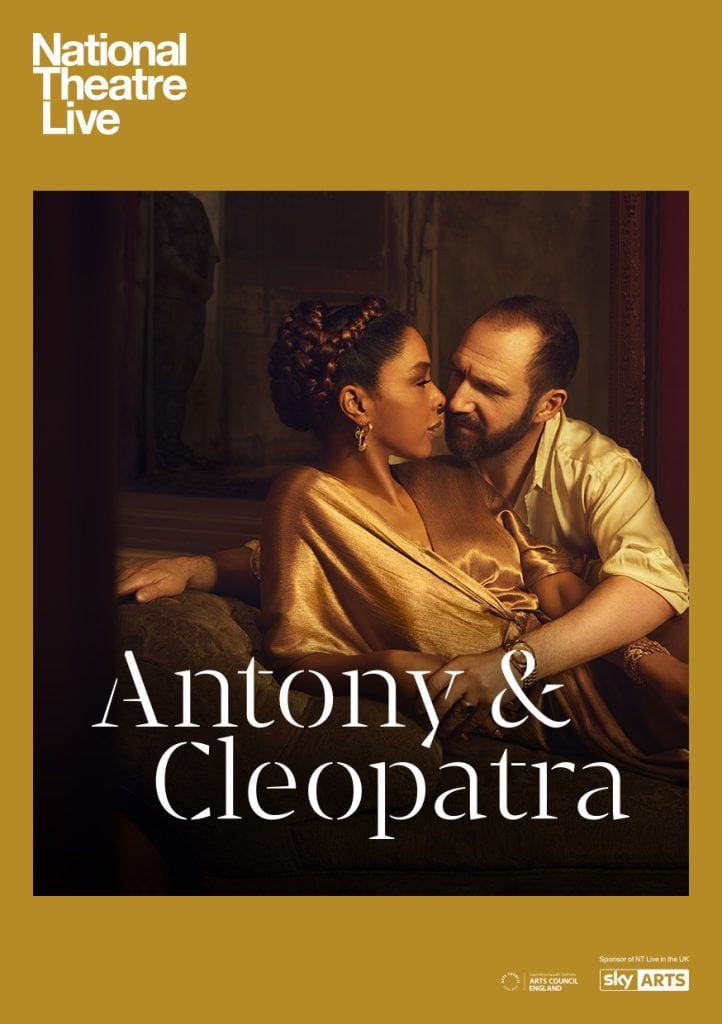 In Western Civilization’s foundational myth, the great Trojan warrior Aeneas chooses duty over love when he leaves the exotic Dido in Carthage to do his duty, to found Rome. William Shakespeare considers what might have happened had Aeneas remained with Dido in the form of his towering Tragedy of Antony and Cleopatra (1606).

First of all, the play’s hero, Marc Antony is past his prime. In fact, he has begun to be a laughing stock among his soldiers, “a strumpet’s fool”. Antony has forsaken his duty to the governance of  Rome, to “dote” upon his own Dido,  the sexy and captivating Cleopatra of Egypt. Antony  is“a has-been, a general who has shirked his duty and abandoned his men.”[i]

Throughout the play, Antony, like Aeneas before him, is torn between his civic duty as one of the triumvir of Rome, and his infatuation with an exotic foreign woman.

The plot is remarkably simple: “Antony breaks from Cleopatra to patch up an insecure peace with Caesar, since Pompey threatens them both; he marries Octavia, and deserts her to return to Cleopatra; war breaks out, Caesar defeats them, and they kill themselves.”[ii]

In the brilliant interpretation given by Ralph Fiennes in the National Theatre’s live broadcast of the play, Antony’s soul struggles between Mars and Venus, Rome and Egypt, West and East. Antony is the Elizabethan’s Roman Aeneas and Cleopatra is his Dido, the Queen of Carthage. (Virgil’s Aeneid was England’s, and Shakespeare’s, favorite epic.). In director Simon Godwin’s updated setting, in Hildegard Bechtler  remarkably flexible and creative scene design, and garbed in Evie Gurney’s exquisite costumes, Shakespeare’s mostly unknown tragedy speaks to the contemporary heirs of our Roman heritage.

Shakespeare’s play would be a better known and more admired play had it not been written by William Shakespeare. Following the run of Hamlet,  Othello, King Lear and Macbeth, the play’s greatness is easily overlooked. Thanks to Simon Godwin and his remarkable cast, Antony and Cleopatra reclaims its reputation as one of the stage’s great works of drama.

Realizing that Shakespeare’s drama is fast-paced, Godwin and his design team create an almost cinematic series of contrasts between what Harley Granville-Barker calls a “doting general, effeminate in Egyptian finery” and “a debauched Eastern queen, mocking things Roman.”[iii]

Shakespeare got his story from Plutarch, but the characteristics he gives Cleopatra  are not in Plutarch. Sophie Okonedo is every inch the match of Ralph Fiennes. Their love/hate relationship raises the possibility that Shakespeare  may have written  the characters recalling a similar relationship from his own life, when the dark-skinned poetess Emilia Bassano Lanier (1569-1645), England’s first professional female poet, and the wife of Alfonso Lanier , a court musician, charmed Shakespeare almost to madness. Emilia bewitched Shakespeare as his London paramour, even while the playwright worked to support his rural Stratford family, his own counterpart to Antony’s Rome. The sonnets to Shakespeare’s “Dark Lady” chronicle an identical infatuation which Shakespeare’s draws upon in creating his Antony and Cleopatra. Emilia Bassano had even written of Cleopatra

Shakespeare’s Antony is what he would have become had  Shakespeare not become demoralized by wanting Emilia Bassano, all the while knowing his desire was ruining him.

The Cleopatra of Ms. Okenedo, the other half of the title, demonstrates why Shakespeare was so infatuated with Ms. Bassano.  In fact,  Harold Bloom seems to be describing her performance when he writes  that “of Shakespearean representations of women, Cleopatra is the most subtle and formidable…” Ms. Okenedo’s Cleopatra never ceases to play at being Cleopatra, and “her perception of the role necessarily demotes Antony to the equivocal status of her leading man… That is why it is so wonderfully difficult a role for an actress, who must act the part of Cleopatra, and also  portray Cleopatra acting the part of Cleopatra…She is  surely the most theatrical character in stage history.”[v]

To understand and appreciate Ms. Okenedo’s achievement, Helen Mirren, by general consensus one of the finest Cleopatras of the modern era, elaborates,

A.L. Rowse notes that Shakespeare  saw Cleopatra “exerting a spell over her man by her contrariousness, her changing moods, her tempestuous temperament, her feminine cunning, her passions.”[vii]  (In this way she harks back to the Kate the Cursed in his Taming of the Shrew.) And that is precisely what we see happening between Ms. Okenedo and Mr. Fiennes.

“Appetite wins,while judgement winks and ignores defeat…No agony, no darkening of the spirit before defeat, nor a Promethean defiance of the partial gods. The hero’s fate is sealed quite casually in a talk with a soothsayer about dice and fighting cocks…[h]ere is no spiritual tragedy of ideals betrayed. The man has had what he wanted from the world; with luck, daring and judgement to bring it him. A debauched judgement, no luck left to draw upon, mere daring become folly, and he loses it; that is the whole story.”[viii]

“Cleopatra dies; defiant, noble in her kind, shaming convenient righteousness, a miracle of nature that – here is the tragedy  – will not be reconciled to any gospel but its own. She is herself to the very end.”[ix]

Antony and Cleopatra is Shakespeare’s idea of how his relationship with Emilia Bassano may have eventuated had they remained together. It is a bittersweet fantasy. Professor Harold C Goddard finds  Shakespeare’s remaining comfort :

“There is something in life in comparison with which battles and empires are of no account. As statesman and soldier,it was Antony’s duty to fight to the bitter end at the Battle of Actium for his half of the empire. If he had, at the price of depriving the world of the story of Antony and Cleopatra – including Shakespeare’s play – is it certain that the world would be better off? The destiny of the world is determined less by the battles that are lost and won than by the stories it loves and believes in.”[x]

The cast supporting the title heroes is first rate. Tunji Kasim’s Caesar plays a junior partner in the troika ruling Rome with great panache. Nicholas Prevost’s Lepidus embodies the military mind to a tee and wins the audience over with a first-rate drunken revel. Tim McMullan’s Enobarbus is the universal British doughboy, a loyal patriotic common-sense patriot. Gloria Obianyo plays Charmian and Georgia Landers plays Iras so that Cleopatra couldn’t possibly want for better friends or servants. Sargon Yelda’s Pompey is played as a charismatic Italian who could easily be a film star.

Director Godwin finds the play’s humor and mines it to great effect. The drunken bachelor party featuring Antony’s spirited song about aging is a highlight of the production. Michael Bruce’s music is just right, as is the musical direction of Magnus Mehta.

Two minor quibbles about the production: Pointlessly, Godwin opens the play with  the tragedy’s final 15 or so lines, making the actual play a kind of flashback. An already long play doesn’t need this kind of repetition. And Charmian leaves the stage empty after allowing herself to be bitten by the asp, for no other purpose, it seemed, that to dispose of the live snake lest it  distract the audience for the rest of the performance.

But the evening was a triumph for all concerned.

And best of all,  America can look forward to more of Mr. Godwin’s work  as he replaces Michael Kahn as director  of the Washington, D.C. Shakespeare Theatre Company

[i] Marjorie Garber, Shakespeare After All. New York: Anchor Books, 2008.