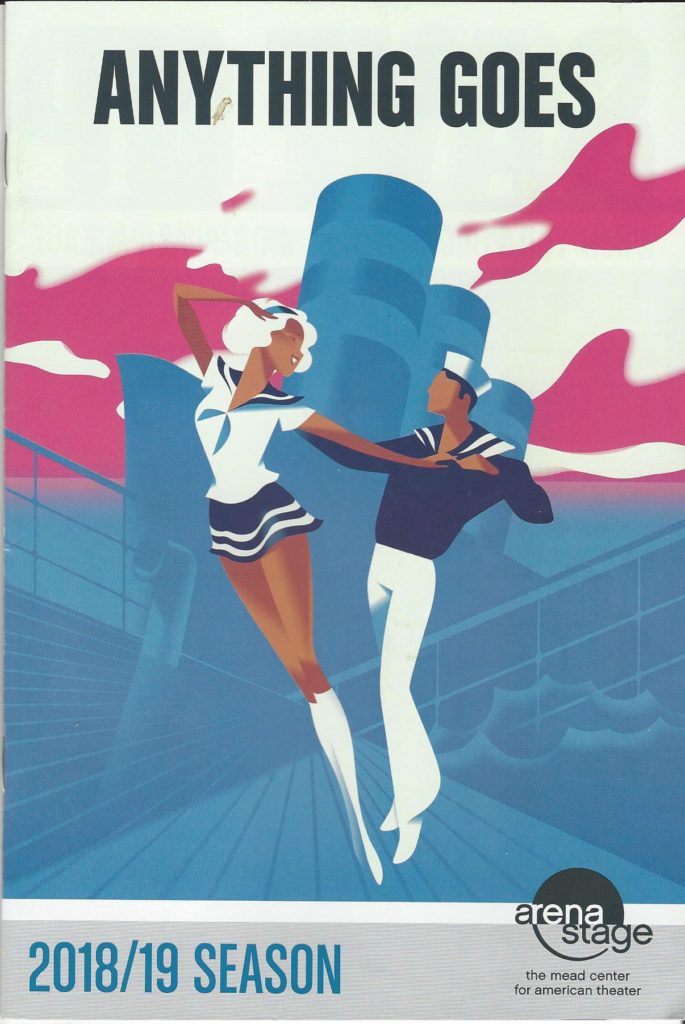 In 1934 Anything Goes, the musical with music and lyrics by Cole Porter opened in New York City. The original book was a collaborative effort by Guy Bolton and P. G. Wodehouse, heavily revised by the team of Howard Lindsay and Russel Crouse.  Their object was maximum fun, and minimum attention to the news of the day. And they succeeded brilliantly. The Times critic wrote that the show had a “dashing score with impish lyrics, and Howard Lindsay and Russel Crouse, who have been revising the jokes in person. After all, these supermen must have had a good deal to do with the skylarking that makes “Anything Goes” hilarious and dynamic entertainment, … “a thundering good song-and-dance show.”[i]

The original Anything Goes  had no “Friendship “ or “It’s De-Lovely” They were added in 1962. Cole Porter tunes seem to easily come and go in various productions of this musical, which is the tenth most frequently produced musical by U.S. high schools.

If the Arena Stage production is any measure of what Anything Goes can be today, high schools should work to raise the musical’s ranking with more and more productions.

Troubles abound for the characters in the libretto but, by the play’s end, all seem to be sorted out, not through any human effort, but through the invisible hand of Providence. Love wins. Again. And everyone leaves the theater happy. (Some audience members were even seen dancing their way out of the theater, testimony to just how good the production was.)

Why was this production so good?

The Billy Crocker of Corbin Bleu

The Reno Sweeney of Soara-Joye Ross

These two performers are consummate entertainers. They can sing, dance, act, cavort, flirt, woo, charm, bedazzle, amuse, amaze, and wow. Each is a full-scale show in and of themselves. Together their raw and sophisticated talents infect each and every member of the company, lifting the entire ensemble to the highest levels of precision – a well-oiled and joyous performance. The supporting players, and next to Mr. Bleu and Ms. Ross, all are supporting, turn in stellar performances, though Lisa Helmi Johanson as Hope Harcourt tends to flatten notes just at the exact wrong time. Casting director Victor Vazquez must be applauded for assembling such a top-rate cast.

In-the-round director Molly Smith makes playing to all sides seem simple and natural, so adept is she in understanding the peculiar needs of arena staging. She is more than ably abetted by choreographer Parker Esse whose dances are fresh, engaging, and designed to draw the audience onto their feet in psycho-physical empathy. Set designer Ken Macdonald knows what to include and what to leave out, all the time sensitive to both sightlines and the need for changes to be brisk. Each set piece is exquisite in the detailing. Space is provided to showcase Alejo Vietti’s elegant and exuberant costumes.

Two reservations about the event: Molly Smith’s director’s notes vainly attempt to find political and social relevance in a musical which depends on having none for its charm to take effect. (Can no one believe art doesn’t have to be political?! It doesn’t, and the best isn’t. See Arena Stage’s Anything Goes for Exhibit A. So winsome was the production that famously recognizable persons of both the political right and left were on their feet all cheering at the curtain calls. Good art can bring people together, like nothing else.)

Neither the orchestra nor the conductor was visible. Were it not for the program listing Paul Sportelli as the conductor and the names of the nine musicians, one might believe the show was one great Karaoke Musical. All sounds were amplified to the nth degree, a fact which took some getting used to. But gradually, the magic of the performers put the amplification in the background as all were caught up into the ebullience of the performing.

In 2018 America, not only does “anything go”, but Tolstoy’s historic warning is a sad fact of life away from the joy of Anything Goes:

If There Is No God -Then Everything Is Permitted