THE PLAY THAT GOES WRONG: A PLAY FOR OUR TIME 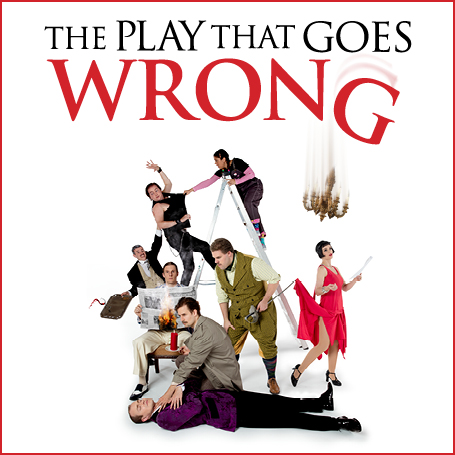 Of all the types of drama, farce is the most politically incorrect.

In fact, according to Aristotle, farce exists to evoke laughter and ridicule toward characters we deem to be  “not normal”. The farceur urges his audience to identify characters as worse than we are in all kinds of ways – socially, physically, morally, intellectually, etc. Onstage characters do the same. And after they identify any deviation from normalcy, the deficient character is subjected to bullying, verbal abuse, mockery, ridicule, physical attack, and even violence. And no one is ever upbraided or chided for this behavior. In fact, this quintessential politically incorrect behavior is encouraged in every way

A  farce begins as a comedy in which  a simple character’s reaction to a relatively innocent incident results in an avalanche of consequences which cascade upon the simple, (rather than complex), characters, as they make one expedient (rather than ethical) decision after another, each time making a terrible situation even worse.  So filled with high octane action is the drama’s plot that it begets  the word “farce”,  from “the French farci or farcie, and thence from the Latin farsa, or “stuffed.”[i]

A farce is stuffed with mean-spirited actions and hurtful emotions.

Farces tend to appear at times when repression of one form or another stifles free expression in a society. The farce gives free reign to the venting of ideas and actions which are to be avoided at all cost in a particular society.

Consequently, here appears a farce called The Play That Goes Wrong, at the Kennedy Center’s Eisenhower Theater, precisely at a time when many people believe they live in a society that has gone wrong.

The Play that Goes Wrong is so perfect in construction and in execution, that it could be a textbook illustration of the farce described by the great critic Eric Bentley in  his seminal work The Life of the Drama:

farce in general offers a special opportunity: shielded by delicious darkness and seated in  warm security, we enjoy the privilege of being totally passive while on stage our most treasured unmentionable wishes are fulfilled before our eyes by the most violently active human beings that ever sprang from human imagination [ii]

The Play that Goes Wrong is actually a play within a play. The Cornley Polytechnic Drama Society is mounting a production of a murder mystery called “The Murder at Haversham Manor”. From the onset, in which a woebegone stage manager attempts to secure a collapsing mantelpiece, things do not go well. The production speeds into chaos, taking everything and everyone with it.  Dropped, repeated, mispronounced, and disordered lines,  as well as a set and costumes which refuse to cooperate,  accentuate the cast and crew’s total disdain for one another, both as artists and as human beings. The plot  echoes  Eric Auerbach’s description of comedy:

something extraordinary happens, something especially arranged, something which is outside the usual course of events, and which affects only one person or a few people, while the rest of the world appears to remain apart from it and indeed to witness the extraordinary event from a spectator’s viewpoint.[iii]

Director Matt DiCarlo uses the fine-tuned  setting by Nigel Hook and delightfully unreliable costumes by Roberto Surace to create wonderfully ordered mayhem on the stage. The capacity audience simply could not stop laughing.

The cast is uniformly excellent in maintaining their dead seriousness of purpose and high energy commitment, even when seemingly at rest. Brandon Ellis plays Trevor the Lighting and Sound Operator who unfortunately insures that neither of his systems ever operates properly. Yaegel T. Welch masters the role of Jonathan, the corpse who never seems to die or know when to enter or exit. Peyton Crim intones the role of the sonorous Robert, while Scott Cote appropriately underplays the butler  Dennis, as he reads “hard” words printed on his hand. Jamie Ann Romeo gives a bravura performance of the ingenue Sandra, sacrificing every limb for her art. Ned Royce flaunts around the stage as the spotlight-happy Max, while Angela Grovey charges ahead as the dauntless Stage Manager Annie.

Evan Alexander Smith is given the monumental task of playing the star, director, and president of the Drama Club, Chris Bean. The role includes a large, mostly impromptu, monologue directed at the audience, chastising them for poor behavior (i.e., laughing.)  Throughout the play Mr. Smith is masterful. The monologue occasions the production’s one slip up as Mr. Smith descends to the obligatory  cheap joke at the White House. The partisans’ applause disguised the fact that at that moment he lost a sizable portion of his audience who remained silent  until the power of the farce got them back into the irreverent swing of things.

The Play That Goes Wrong  by Henry Lewis, Jonathan Sayer, and Henry Shields offers a rare opportunity to see a first-class farce played with appropriatly wild and care-free abandon. If you need to laugh at fools, knaves, and morons in a “safe space”, you won’t do better than at The Play That Goes Wrong, “a deliberate monument to stupidity, a disturbing reminder that God has lavished stupidity on the human race with His own unrivaled prodigality.”[iv]