LITTLE THEATRE OF NORFOLK’S DEATH OF A SALESMAN: THE SOUL SURVIVOR 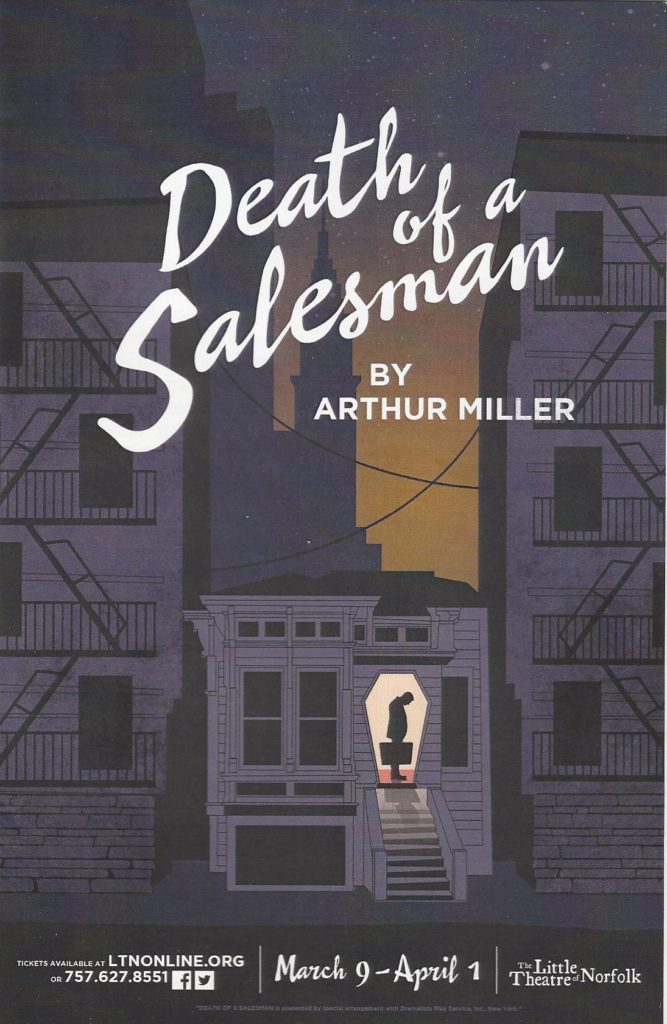 Jack Kline, president and chief operating officer of Christie Digital Systems USA, Inc. says “people like to do business with people they like. That’s just a natural part of the way people operate.”

Likability is the subject of Arthur Miller’s famous drama, Death of a Salesman. The play’s hero, Willy Loman, is, like all of Miller’s heroes, not very likable. Miller, the son of Izzie, a shoe salesman, maintained that Willy failed because he was caught up in the fatal American Dream of success. Speaking for the playwright, Willy’s son Biff says, “We had the wrong dream”.

But, in fact, the desire to succeed is not the problem for Willy, or anyone else. (What would the alternative be?) Striving to succeed is how human beings learn. Willy fails in how he tries to measure human success. The play raises the important question of what constitutes a successful life.

Unlike the successful Dave Singleton, Willy’s idol, Willy Loman is an unlikable person. He browbeats his devoted wife, Linda, raises his sons with corrupt and contradictory “ideals”, cheats with other women, lies about his past successes, accepts handouts from his friend Charley but refuses Charley’s offer of an honest job.

Nevertheless, in Kay Lynn Perry’s excellent production of the play at the Little Theatre of Norfolk, we may not like Willy and his sons, but we come to love them as fellow broken and flawed human beings created in the image and likeness of God.

There is, however, a character who stands head and shoulders above all others in Miller’s important drama., Death of a Salesman:

True to her marriage vows, Linda, like Shakespeare’s Brutus’ wife, Portia, she supports and defends her husband with a wisdom unavailable to him, all the while guided by a strong moral compass. No parental alienation trickery with her sons for her. There are no scenes in which Linda tries to turn her sons’ affections against their father, no playing the beset-upon-victim by Linda.  As a wife, she is called to respect  her husband. Her vocation is to honor the nuptial relationship with her own unfailing love and faithfulness, as well as her unselfish devotion and wise counsel, modesty and graciousness, courage and strength, and abiding faith and piety. As wife and mother, Linda fills their life with self-giving love.

Linda Loman is the most likable character in this play, and perhaps in all of Miller’s plays, because she manages, despite the odds, to love her unlovable husband. She may not like all that he does, but her love never wavers. In this way Linda approaches the ideal, as I point out in “What Makes an Audience Like One Character More than Another?”  In Mrs. Loman’s uncomplicated simplicity, “Linda” (the name itself connotes her “beautiful” soul) the character stands for everything sound in the sacred institution of marriage. Even Arthur Miller loves Linda:

She sees her function as serving as a silent, behind-the-scenes controller. It’s very important to understand that Linda is aware of the real story from the moment the curtain goes up. She knows that Willy’s suicidal, and when you’re living with a suicidal person, you tread very carefully, because you realize how delicate his hold on life really is. If you make a single misstep, you could send him overboard, and that’s true in today’s world as well. I think there’s currently a certain amount of standardized thinking in relation to that character. People would like to think that a woman could simply engineer the whole situation, but she can’t. And neither could a man. When you’re dealing with delicate mental imbalance, you have to be very careful. On the other hand, when Linda’s alone with her sons, we can see the power of her feelings—as in the scene where she explains to the boys that Willy is on the edge of his life. I regard Linda as a very admirable person. Outwardly, she’s suffering more than anyone else in the play, and she’s also doing more, in her own way, to prevent the coming catastrophe.[i]

Without a grounding in a religious world view, Willy, like the playwright himself, looks to a wife to provide a spiritual or moral compass. Professor Robert Cardullo explains.

Miller’s crisis is religious. Set in a solid Jewish or Christian… cosmos, with the terrain open and the compass steady, with hope clear and anguish purposeful, he could have lived to make dramas out of his life, dramas meaningful to his fellow citizens and constructive of society as a whole. Instead, Miller found himself in a world with a wispy ethos and a dim cosmology, where there was no common sounding board of aspiration around him to echo his words, no grand, austere design against which his characters could measure themselves. This was, and is, a desolate world in which to look for tragic art; and some of that desolation must necessarily have been in Miller himself.[ii]

Judy Yerby Burke plays Linda in this production, and, of all the stage performances we have seen in Virginia since moving here a year ago, hers is strongest. Her Linda is not merely a reproduction of other, more famous actresses’ performances. Ms. Burke looks within herself and finds a unique, but true, Miller wife and mother. Her performance is one to be cherished.

All of the performances in Kay Lynn Perry’s production have a uniqueness about them which is one of the production’s most endearing qualities. Often, around rehearsal rooms, and acting studios, one can hear the advice, “Find the character in yourself” or “Make the character your own.” Well, these actors did just that, to remarkable effect.  From the smallest roles like Audrey Hess’ Second Waiter, Madeleine Dilley’s Letta, Charlie Mason’s Stanley, Morgan Gresham’s Jenny, Kristi Caras’ Woman, and Mia Mitchell’s gem of a characterization of Miss Forsythe, to more substantial roles like George Plank’s officious and smarmy Howard Wagner, Tobias Eisenlohr’s before and after Bernard, John C. Roberts II haunting Ben, Willy’s phantom brother, the good Samaritan neighbor Charley of Frank McCaffery, Charles Robinson’s eager-to-please peacemaker brother Happy, to Krys “Keys” Wrenn’s staggering interpretation of Biff,  the narcissistic  elder son, all the roles exhibit a care and love which is thrilling to see.

Over twenty years ago, America’s greatest living playwright, David Mamet sent shock-waves through the world of acting panjandrums and poohbahs by sending some broadsides at the whole field of actor training based on Stanislavski’s “Method.” In his book True and False. Heresy and Common Sense for the Actor, Mamet said, among many important things, that:

The actor does not need to “become” the character. The phrase, in fact, has no meaning. There is no character. There are only lines upon a page. They are lines of dialogue meant to be said by the actor. When he or she says them simply, in an attempt to achieve an object more or less like that suggested by the author, the audience sees an illusion of a character upon the stage.

I thought of Mamet’s observations while watching Steve Suskin’s powerful rendition of Willy Loman, a performance which illustrates Mamet’s view better than any other I can recall seeing.

It is a courageous performance, in that it consciously or unconsciously disregards everything anyone ever said or did regarding Willy Loman. In fact, it caused a particular Mamet passage to jump to my mind.

When, in Act II, Mr. Suskin expresses Willy’s realization that Charley is his only friend, the effect is theatrical dynamite, leveling the nervous systems of the assembled audience. Mr. Suskin’s performance is one you should not miss if you care about acting truthfulness.

The cast and Ms. Perry are ably assisted by the technical staff which have created an environment which stays out of the way of the play. That is an accomplishment as rare as it is wonderful. Nick Thornburg’s setting, Katelyn Jackson’s costumes, Mike Hilton’s lighting, and John C. Roberts very effective sound design could not serve the play and the actors better.

Linda Loman concludes the evening with the famous words

I don’t say he’s a great man. Willie Loman never made a lot of money. His name was never in the paper. He’s not the finest character that ever lived. But he’s a human being, and a terrible thing is happening to him. So attention must be paid. He’s not to be allowed to fall in his grave like an old dog. Attention, attention must finally be paid to such a person.

The Little Theatre of Norfolk’s production of Death of a Salesman makes those words ring true.

What we see  on the Little Theatre stage is not just the death of a salesman, but, perhaps more significantly, the survival of a loving and faithful soul.

Attention must be paid to such a production.