THE VIRGINIA STAGE COMPANY: OUR TOWN AT THE WELLS 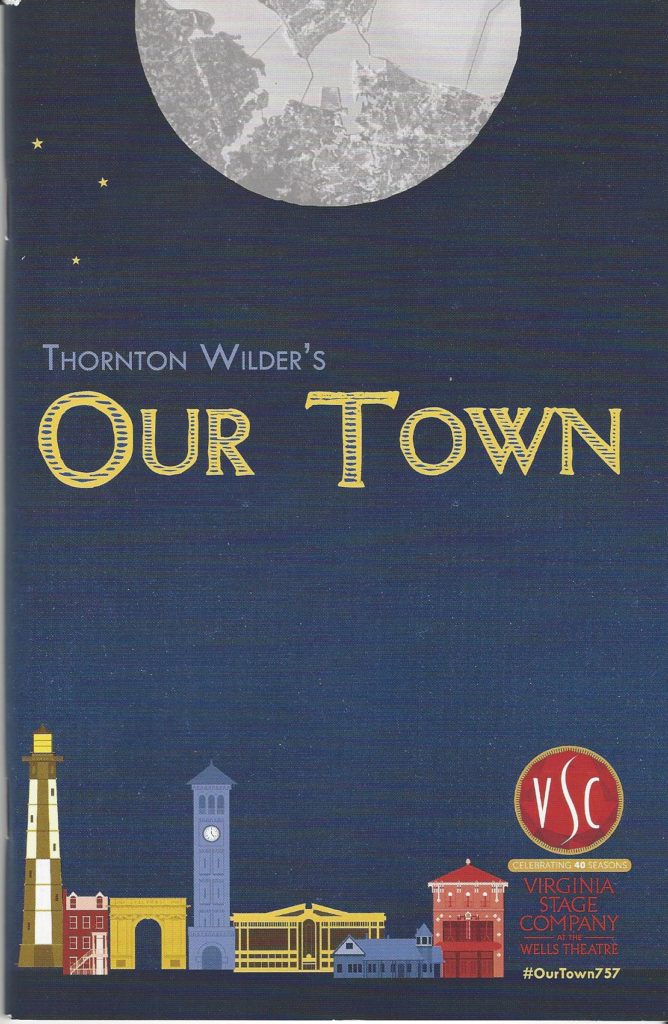 On September 13, 1937 Wilder wrote to his old friend Gertrude Stein about his work on a new play.

He called it an “immersion, immersion into a New Hampshire Town.”[i]

Our Town was not received with much enthusiasm at first.  During Boston tryouts, the theater was so empty the producer cancelled the rest of the bookings. Once open in New York, audiences stayed away until it won the Pulitzer Prize.

The 955 seat Morosco Theater might have contributed to the problem.

Wilder had written his play in the lyric mode, rather than in the dramatic mode. In fact, he eschewed all theatrical trappings which might overpower the delicacy of his storytelling. The American critic in the first audience noticed the unique situation immediately:

Our Town, like [O’Neill’s] Ah, Wilderness, is an exercise in memory, but it differs from the O’Neill work in that it is not a play in the accepted sense of the term. It is essentially lyric, not dramatic. The tragic velocity of life, the elusive nature of experience, which can never be stopped or even truly felt at any given point, are the themes of the play—themes familiar enough in lyric poetry, but never met, except incidentally, in drama. Mr. Wilder, in attempting to give these themes theatrical form, was obliged, paradoxically, to abandon almost all the conventions of the theatre. In the first place, he has dismissed scenery and props as irrelevant to, and, indeed, incongruous with his purpose. In the second place, he has invented the character of the stage manager, an affable, homespun conjuror who holds the power of life and death over the other characters, a local citizen who is in the town and outside of it at the same time. In the third place, he has taken what is accessory to the ordinary play, that is, exposition, and made it the main substance of his. The greater part of the first two acts is devoted to the imparting of information, to situating the town in time, space, politics, sociology, economics, and geology. But where in the conventional play, such pieces of information are insinuated into the plot or sugared over with stage business and repartee, in Mr. Wilder’s play they are communicated directly; they take the place of plot, stage business, and repartee.[ii]

As a lyric, Our Town produced an audience response unlike both the empathetic type of traditional realistic drama and the alienation version of Brechtian drama. The critic John Simon identified the play’s unique power. He found Our Town to be ”a piece of grassroots Americana subjected to a kind of alienation effect more Pirandellian than Brechtian.”[iii]

In 2008 Our Town had a landmark reconsideration under the hands of Chicago director David Cromer. Cromer believed that Wilder’s precious  play needed a small intimate theater. After opening his play in Chicago, he transferred it to New York’s  199 seat Barrow Street Theater. To underline  the play’s immediate relevancy, Cromer costumed his characters in contemporary clothing, and allowed soft vocalizations by having the actors and audience proximate to one another in the tiny theater space. The result was dynamic.

Our Town is not a play about the evaporated glory of simpler yesteryears. On the contrary, it whispers to us the urgent necessity of living in the here and now — which is all anybody in Grover’s Corners ever had, all anybody anywhere really has.”[iv]

Cromer even rotated the actress Hellen Hunt into the role of the Stage Manager, following a practice begun when Massachusetts’ Williamstown Theatre Festival cast Geraldine Fitzgerald in the role in 1976.

The Virginia Stage Company has taken yet another, misbegotten, route into Thornton Wilder’s play. Director Chris Hanna has chosen not the lyrical approach, nor the dramatic approach, but rather the epic theater approach. His designer Narelle Sissons has turned the interior of the Wells Theatre into the interior of The Norfolk Scope. Seats on the Wells’ stage floor create an arena playing area. Platforms step down into the Wells’ auditorium where scenery is stored, and additional playing areas are created. The balcony and boxes are turned into high playing spaces. No longer a delicate lyric, the Virginia Stage Company’s Our Town is occasionally microphoned to enhance the epic feel of the event. Occasionally recorded reminiscences of Tidewater residents, voices of The People, play into the theater. Some of Jane Alois Stein’s costumes are of 1901-1903, some are of today.

And, for some reason,  the actors employ all possible American regional dialects except the Downeast dialect of New Hampshire.

The actors are probably very talented. In fact, I have seen two of them – Lyneal Griffin and John Forkner – turn in stellar performances with The Tidewater Stage. But here, the cast seems unmoored, at sixes and sevens, as they juggle delicate, intimate poetic language within a circus-like space. (Imagine a marching band asked to play chamber music.) Only Felicia Fields as Rebecca Gibbs seems to have retained any of the profound beauty and stark joy of Wilder’s original vision.

Wilder created the Stage Manager to reflect his personal attitude toward the people and place and happenings of Grover’s Corners. Whether male or female, the actor playing the Stage Manager needs to accomplish that basic task. Unfortunately, at the end of the Virginia Stage Company  performance one is still wondering what Ellen Harvey’s Stage Manager makes of all we have seen and heard.

The Virginia Stage Company’s Our Town makes clear why the play is a perennial favorite among high school drama groups, but leaves unexamined the reasons the play won the 1938 Pulitzer Prize for Drama.

Like Loading...
October 19, 2018 – 11:32 am | By Paul Kuritz | Posted in Acting, Current Events, from Paul, History, Poetry, Quotations, Theater | Comments Off on THE VIRGINIA STAGE COMPANY: OUR TOWN AT THE WELLS