THE FERRYMAN – A MODERN IRISH TRAGEDY 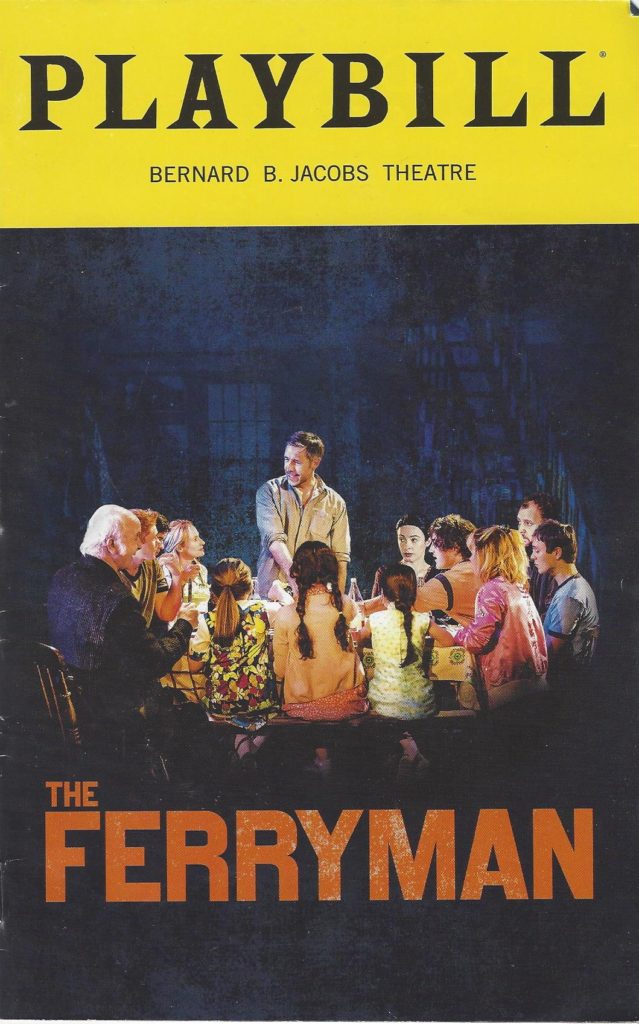 Near the end of Jez Butterworth’s gripping new drama, The Ferryman, Uncle Pat, the aged family repository of education and lore, begins to read,

“Here all the crowd streams, hurrying to the shores, women and men, pleading to make the crossing, stretching out their hands in longing for the far shore. But the boatman rows on. Aeneas, stirred and astonished at the tumult, said. “O virgin, tell me, what does this crowding to the river mean? What do the souls want?” The ancient priestess replied… [i]

And then he closes the book and intones from memory,

“Son of Anchises, true child of the gods, all this crowd, you see, they are the unburied. The ferryman is Charon. He may not carry them from the fearful shore on the harsh waters before their bones are at rest in the earth. They roam for a thousand years lost on these shores, their souls abandoned. Only then are they admitted and revisit the pools they long for.”’

As he begins his  intonation, Quinn. the lord of this rural Irish clan, enters the room, and suddenly the secret heart of the tale is revealed. Quinn is our Aeneas, and we have been watching the defeated Irish Catholics of Northern Ireland, our modern-day Trojans, struggle in the aftermath of defeat and betrayal.

Uncle Pat reminds all that “Our friend Virgil has it that there’s only two types of souls forbidden passage to the beyond. The unburied. And liars. Those that lie to the innocent.”

Within the great unfolding Carney family tragedy, and in the never-ending Irish civil war, both types of souls are found.

Daniel Mendelsohn’s answer to the question, “What is the Aeneid about?” also tells us what The Ferryman is about:

What is the Aeneid about? It is about a tiny band of outcasts, the survivors of a terrible persecution. It is about how these survivors—clinging to a divine assurance that an unknown and faraway land will become their new home—arduously cross the seas, determined to refashion themselves as a new people, a nation of victors rather than victims. It is about how, when they finally get there, they find their new homeland inhabited by locals who have no intention of making way for them. It is about how this geopolitical tragedy generates new wars, wars that will, in turn, trigger further conflicts: bella horrida bella. It is about how such conflicts leave those involved in them morally unrecognizable, even to themselves. This is a story that both the Old and the New Worlds know too well; and Virgil was the first to tell it. Whatever it meant in the past, and however it discomfits the present, the Aeneid has, alas, always anticipated the future. “[ii]

Set in the kitchen  of the Carney Armagh farmhouse in 1981, The Ferryman is a play about Ireland and about Northern Ireland,  set at the height of Bobby Sands’ hunger strike. It is a play in which the older generation still recalls and reacts to the Easter Rising firsthand. It is a play about the mystical idea of an Ireland of fairies and banshees. It is a play about youthful idealism crushed by brutal adult pragmatism. And as an Irish play, it is funny, with much of the humor coming from its child cast members who swear like sailors.

Quinn Carney is a loving father whose life has been overturned by the unexplained disappearance of his brother Seamus. Quinn and his estranged wife Mary choose to care for his brother’s vivacious wife, Caitlin, who  seems to cling to the belief that Seamus will return.

But a body has been found preserved in a bog, and the family’s anxious quiet watchfulness comes to a dramatic, harrowing, and, ultimately, violent end.

A cast of more than 20 Irish rural folk and one enormous Englishman, Tom Kettle, – slow in speech and thought – fill the tiny Carney homestead for harvest, here a symbolic time for feast and homecoming.  Everyone  is about to reap more than rye this year.

Even a war-thirsty blood-monger like Darius knew, the harvest is scared. The harvest is breath and life and spirit. And hope. Lord knows we need some of that right now. I shall close with the words of Henry Thoreau. “The true Harvest of my life is intangible. A little stardust caught. A portion of the rainbow I have clutched.”[iii]

The cast is flawless. Paddy Considine leads the way as Quinn Carney, the activist turned farmer and head of the household. He is an Irish version of the American TV icon John Walton, the archetypal husband, father, farmer, always in control and never riled. His ever-ailing passive-aggressive wife, Mary, is played to perfection by Genevieve O’Reilly.

Laura Donnelly essays his passionate grieving sister-in-law Caitlin. Though married to Quinn’s missing brother, she has always loved Quinn, and has confessed it only to her priest, Father Horrigan, soon to be a traitor to both friends and God.  Fionnula Flanagan dazzles as Aunt Maggie Faraway, the holy fool in touch with the fairy world, delighting the young ones with tales of their futures. Dearbhla Molloy dominates her scenes as the heart-broken iron Aunt Patricia, clutching her transistor radio  as she seeks political news with which to rekindle her eternal rage. Mark Lambert,  as the delightfully loquacious Uncle Patrick, whose love of the classics can’t be controlled; the giant Justin Edwards as an  English George from Of Mice and Men with hidden apples, rabbits, and desires; Dean Ashton as tough Frank Magennis and Glenn Speers as even tougher Lawrence Malone, the menacing  IRA leader,  all turn in bravura performances. The Carney children – James (Niall Wright), Michael (Fra Fee), Shena (Carla Langley), Nunu (Brooklyn Shuck), Mercy (Willow McCarthy), Honor (Matilda Lawler), and Oisin Griffin Osborne), along with the Corcoran children – Shane(Tom Glynn-Carney), Diarmaid (Conor MacNeill), and Declan (Michael McArthur) – provide both a chorus and a glimpse of the family’s doomed future.

Under the relentless direction of Sam Mendes, the production demonstrates the dramatic power known by Ibsen and Chekov and O’Neill – nothing can grip an audience like a well-made play in a single engaging realistic setting. Designed by Rob Howell and lit by Peter Munford, the Bernard B. Jacobs stage is transformed into a place where domestic bliss can easily and quickly turn into Greek tragedy.

Tom Kettle saw a rainbow in the morning. It was not, as he predicted, a good omen. The Ferryman started to transport bodies.