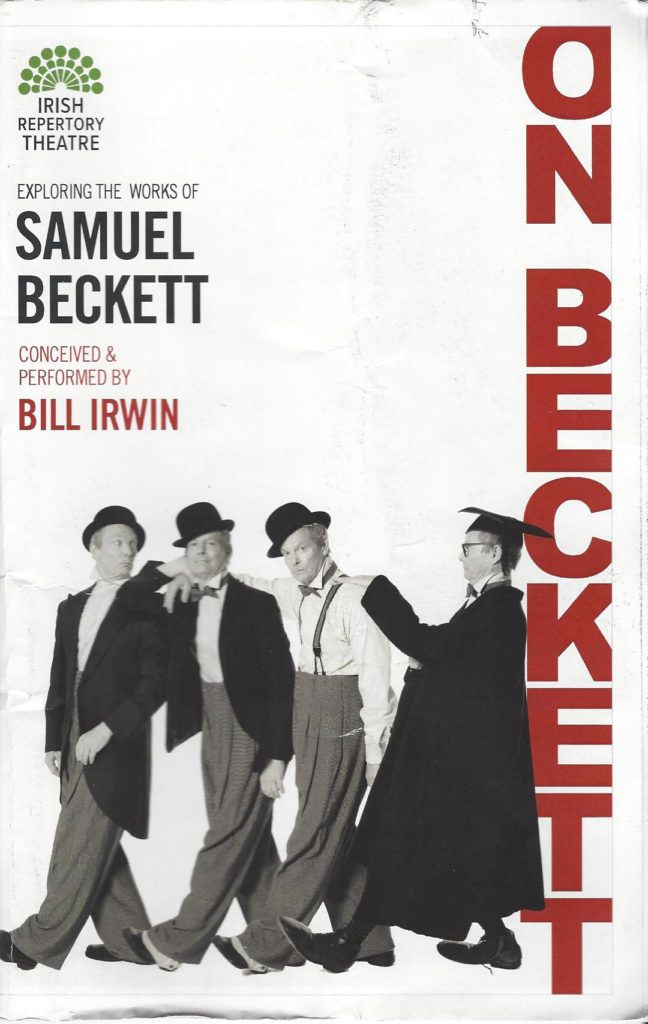 Under the unassuming surface, the four great initial plays of Samuel Beckett embrace the fundamental themes of existence and, like no others in English since Shakespeare’s, wrestle them to the ground. For each of mankind’s defeats – by faith, love, society, and mortality – Beckett conjures up a tremendous theatrical master image that, supported by subsidiary images and dialogue, achieves a reduction to the absurd.

Yet this tragic vision is endured with smiles, laughter and poetry.[i]

Samuel Beckett (1906-1989) was the first dramatist of the 1950s to achieve international fame. The 50s were a time of beatniks, cool jazz, poetry readings in coffee houses, and a cold war featuring the possibility of total human annihilation by atomic holocaust. Beckett’s characters, all essentially clowns in social disguise, seem to live as survivors of that very holocaust. Beckett considered the human metaphysical condition from the  perspective of the traditional clown. His characters, like clowns, “have no pasts and live alone with no prospects of a future.”[ii]

Of all the playwrights of the Existential Theatre of the Absurd, Samuel Beckett alone has emerged as the one with a universal and timeless voice. That is, I believe, because at his heart, Beckett’s world is seen through the ancient eyes of the Clown.  The structure of the primary group of tribal society comprised four roles which have expanded and diversified through time – headman, hunter, shaman, and clown.[iii]  The clown’s function was to create laughter by mocking the other three. “The clown’s favorite target was the headman; mocking him got the biggest laughs. Together, the shaman and the clown constituted the ideational, reflective, thinking sphere of tribal life.”[iv]

On Beckett continues that tradition, as Tony award-winning Bill Irwin, the unofficial Dean of America’s Clowns, performs and reflects on Samuel Beckett’s works in the ninety minute live “TED Talk” he conceived, and now performs, at New York’s Chelsea district Irish Repertory Theater. If the late Professor Irwin Corey had a non-double-talking twin, it might just be the sixty-eight-year-old Bill Irwin. He is provided with a stage environment by designer Charlie Corcoran and  Michael Gottlieb which evokes a hint of the Beckett landscape while always keeping the focus on the amazing Mr. Irwin.

Irwin’s perspective is a unique and practical  one. He talks about Beckett as one responsible for bringing the author’s words and stage directions to life on stage through the deliberation of performance options leading to both vocal and physical decisions.

Irwin seems to have been not merely fascinated by Beckett; he is obsessed. He admits that the words will not leave his head. With the requisite bowler hat, cane, baggy pants and suit coats, a variety of bow ties, and an untamed microphone, Irwin leads his audience into the hypnotic physical world of Beckett’s theater. From the clown’s physical actions emerge Beckett’s spare words and phrases, together constructing the eternal human condition of “toil and play”.

Beginning with, and returning periodically to, Beckett’s Texts for Nothing, 13 short prose pieces written in 1950 and recommended to him by the Open Theatre’s Joe Chaiken, Irwin tackles passages from The Unnamable and Watt before settling into sections from Waiting for Godot, a work he has experienced many times, wearing a variety of different hats. Young Finn O’Sullivan (an eighth-grade student at Saint David’s School in Manhattan) eagerly joins him as  Beckett’s Boy sent from Mr. Godot. While insisting that he is neither a Beckett scholar nor a Beckett biographer, Irwin reveals and illuminates more of the unique world of Samuel Beckett than most Beckett scholars and biographers do. He plays all of Godot’s characters at one time or another, but it is his magisterial rendition of Lucky’s heartbreaking monologue which is the high point of the performance

Irwin is a physical master clown having trained at the late great Ringling Clown College, the most selective school of higher education in American history. Irwin also has a very fertile brain, having long ago had it formatted at Oberlin College. If any flaw may be found in Irwin’s performance, it is that he does too much with the language. He colors each and every word with every crayon in his 152 set of vocal Crayolas. The result is too much information to take in as the density of words cascade by. Fewer intonations per word would allow more dramatic insight, I think.

Noting that Beckett attended the first early movies with his Dublin family, and attended the vaudeville and variety shows of the time, Irwin makes a strong case for the Irish vaudeville-inspired landmark production of Waiting for Godot offered by Dublin’s Druid Theatre Company.

As Touchstone says to Audrey  in Shakespeare’s As You like It, “It is meat and drink to see a clown.”

Especially if that clown is Bill Irwin.