GIRL FROM THE NORTH COUNTRY – A THIN PLACE FOLK OPERA 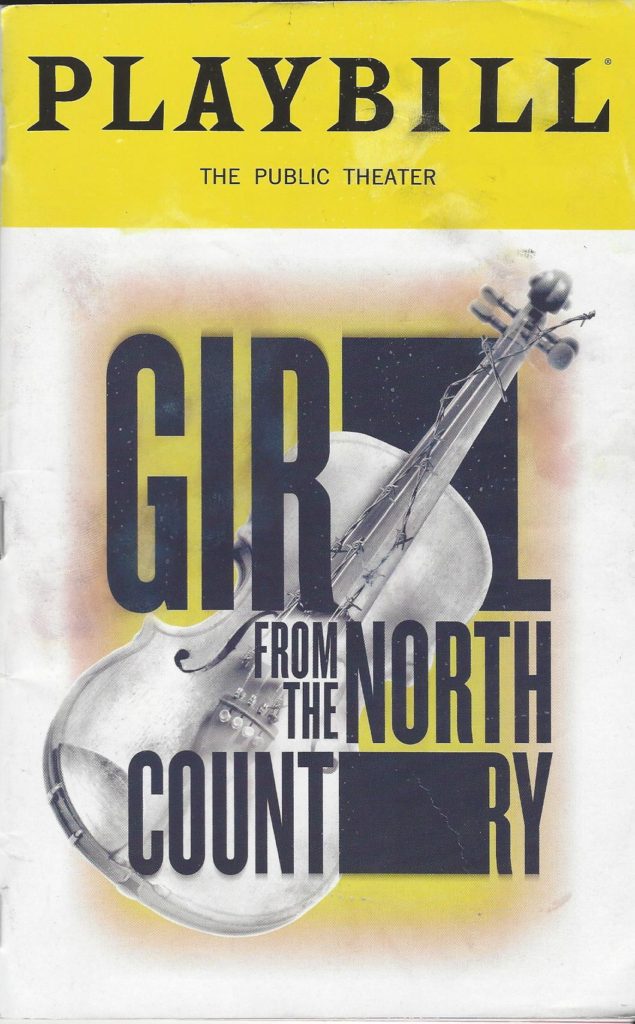 Nobel Prize winner Bob Dylan asked Conor McPherson, the world’s greatest English-language playwright, if he would be interested in using his songs in a theater piece.

The result is the magnificent folk-opera Girl from the North Country.

Critics of the work ignore the key to understanding the work’s deep center: Conor McPherson was most interested in the songs from Dylan’s so-called “Christian Period.”

Why would that be?

Mr. McPherson is Irish to the core. Consequently, he knows, and has possibly experienced, what the Irish call “thin places”. Certainly “thin places” have given McPherson’s previous plays their magical and mysterious dimensions.

Heaven and earth are only three feet apart,

but in thin places that distance is even shorter.

Thin places confirm the Orthodox Christian belief (the Christianity closest to Dylan’s Jewish roots), that some physical locations on earth are closer to the spiritual realm than others – places where God’s presence is more accessible to us as humans. The intersection of these spheres are mesmerizing and mystical places, as the veil between heaven and begins to disappear.  Past, present and future seem to collide in these spaces. It is as if the visitor witnesses, or even experiences, an ancient reality, in just a passing moment.

There is a luminous quality to the air and light caused by the sacred touching the mundane. For a moment, one sees clearly. One can touch heaven.

Girl from the North Country is such a moment – an extended moment, during which the communion of saints arrive, during which the deceased are present again to show and tell us what happened to them on earth, and during which they gloriously testify, with song and dance, as to the joyful spiritual adjoining reality in which they now reside.

Dylan and McPherson alike see and create with their nous. As a result, critics unfamiliar with the concept of nous seem baffled by what they experience on stage.

In Orthodox Christianity nous refers to the noetic energy that functions in the heart of every spiritually healthy person. The nous is “the eye of the soul,” the very heart of what it means to be a person made in the image and likeness of God. It is, as McPherson says, “the space between knowing and feeling”, the spiritual faculty through which one can directly experience God. Darkened by the fall, the nous may be purified through watchfulness, prayer, and spiritual practices.

Through their nous, the folk opera’s creators have been able to reveal what was, what is now, and what ever shall be, regarding the Depression Era residents of a Duluth Minnesota boardinghouse.

One may not understand what is happening, yet one always feels one absolutely understands what is going on. That is the power of the nous in action. Listen as McPherson explains it:

Beyond logic, beyond simple narrative structure, [a play] should have a feeling that what’s most important is not really happening in front of us, but we’re feeling it in the darkness and at the edges of the play and underneath the play, and we’re connecting to it in a kind of physical way. For me, in theater, that’s what I aspire to and that’s what sometimes I would say feels more like music.[i]

Our guide to the thin place is, as in Thornton Wilder’s Our Town, a deceased man, now returned to narrate and participate, once again, in the story. He is, or was, Dr. Walker (Robert Joy), as he says, “Back when this was our world.” His world is another place now as the action moves between the two places.

At Girl from the North Country’s center is Nick Laine (Stephen Bogardus), who rents out rooms in his ramshackle house to delay foreclosure. His family includes an alcoholic young son, Gene (Colton Ryan), who hopes to be a writer, and an adopted African-American daughter, Marianne (Kimber Sprawl), who seems to be pregnant. She explains how it happened:

Someone ‘deeper than a man. Older than a man. When I pressed my face into his tunic and I breathed in, I could smell, like, ancient water. You know that smell like water under ground? Like stone? And when I breathed in more and more it was like I was breathing through him. And I could see through him – into the ancient past. A figure in a boat, and someone was singing and I…That’s how it happened.[ii]

Nick’s wife, Elizabeth (Mare Winningham), is a holy fool. Perhaps suffering from a dementia that has turned her into a dependent, unruly child with a sailor’s mouth. Or perhaps living with a foot in each world. In any event, Nick seeks comfort in the arms of a boarder, Mrs. Neilsen (Jeannette Bayardelle), whom he expects will soon come into some money.

Everybody on earth has expectations, but nobody really believes they will materialize. Images of lost and murdered children haunt the earthly boardinghouse; as hopes are broken, additional lives are diminished as despair arrives. The Slow Train is either wished for or feared.

Also living on the premises are the Burkes – the blustery, big-talking father (Marc Kudisch) and the disreputable mother (Luba Mason) of Elias (Todd Almond), an adult child with a toddler’s mind. He is both a burden to his parents and a crushing opportunity for them to love. The newest arrivals at the boarding house are a con man assuming the guise of a Bible salesman, the Rev Marlowe (David Pittu), and an ex-convict and boxer, Joe Scott (Sydney James Harcourt).

Mr. McPherson directed this production and so was able to use the visual skills of his design team– Rae Smith (set and costumes), Mark Henderson (lighting) and Simon Baker (sound) – to clarify the mysteries aroused by the text alone. Oversize photographs of  Duluth vistas occasionally appear, allowing silhouetted figures to create almost mythic images before they step from the shadows into a world of song and dance. The other reality continues the mythic quality as the once silhouetted figures sing, dance,  and play instruments. (Lucy Hind provides amazing movement appropriate to figures living in two worlds at the same time.)

Bob Dylan’s music is not used as it would be in a normal musical or opera. The songs neither advance the plot nor reveal anything about the characters. They are pure  moments of revelation,  courtesy of visitors from the heavenly world next door. Their intense proclamations may be accompanied by show lights surrounding the proscenium arch or mirror ball-created stars filling both stage and auditorium. Mr. McPherson explains

The more the song has nothing to do with what is happening on stage, the better the song fits.

He believes Dylan’s lyrics are “beyond reason and rationality:”

Mr. Dylan sings about God a lot. Sometimes God appears as an impossible reflection of yourself. Sometimes as someone you could never know. But however God appears, however Mr. Dylan begs for mercy, you understand that cry.[iii]

Combined with Dylan’s lyrics, the music embodies “a fringe of indefinite extent, of feeling which we can only detect, so to speak, out of the corner of the eye and can never completely focus; of feeling of which we are only aware in a kind of temporary detachment from action.”[iv]

The entire cast is magnificent. It is a true ensemble in every way Especially memorable are Mare Winningham’s delivery of Like a Rolling Stone and Forever Young; Sydney James Harcourt’ s ferocious Hurricane;  Luba Mason’ Is Your Love in Vain?; Kimber Sprawl’s  Idiot Wind;  the glorified Todd Almond’s Duquesne; and the ensemble’s jubilant You Ain’t Goin’ Nowhere.

The final vista which concludes The Girl from the North Country is of  a huge cross formed as a row of telephone poles vanishes into the upstage horizon. Around the base of this cross stand mourners, dressed in black, surrounded by a stage of votive candles.

The characters mourn the death of the deformed Elias Burke. But we have just seen the resurrected Elias, clad in a brand-new white suit, joyfully singing and dancing to Duquesne Whistle as the chorus of residents create a Bill Gaither-style gospel celebration. For Elias, the long anticipated Slow Train has arrived, and he has found joy and eternal life on the other side of the thin place.

Listen, all of my plays, I think a lot of the time I’m writing a kind of Nativity play. That’s why his songs, to me, they’re like hymns, and this whole thing is like a religious service. I think theatre is ideally built to hold those very transcendent feelings. I can’t say I’m a card-carrying religious person at all, but that feeling you get of the hair standing up on the back of your neck in the theatre—if you can get the energy flowing toward that place where you’re feeling like, this can all just maybe take off through the roof of this theatre. I think Bob’s music is really like that.[v]

At the end of the proceedings Dr Walker reports

Saw Marianne and her Joseph come by the following winter. And damn if she didn’t have a baby in her arms! Yes, she had a baby. They were well dressed in warm coats. Came up and stood outside the old inn with that baby in their arms. They looked up at the windows a while, then I watched them walk away. I looked out on the water. Then I closed my eyes.[vi]

So, Girl from the North Country ends with a reference to the singular time when the World of God entered the World of Man – the Nativity of Jesus Christ- with Marianne cast as the Blessed Mother of God, the Theotokos.

Though the characters we have met in Dr. Walker’s story have died, they are not gone. The powerful subtext of the McPherson-Dylan folk opera may be found in the old poem Death Is Nothing at All by Henry Scott-Holland:

Death is nothing at all.
It does not count.
I have only slipped away into the next room.
Nothing has happened.

Everything remains exactly as it was.
I am I, and you are you,
and the old life that we lived so fondly together is untouched, unchanged.
Whatever we were to each other, that we are still.

Call me by the old familiar name.
Speak of me in the easy way which you always used.
Put no difference into your tone.
Wear no forced air of solemnity or sorrow.

Laugh as we always laughed at the little jokes that we enjoyed together.
Play, smile, think of me, pray for me.
Let my name be ever the household word that it always was.
Let it be spoken without an effort, without the ghost of a shadow upon it.

Life means all that it ever meant.
It is the same as it ever was.
There is absolute and unbroken continuity.
What is this death but a negligible accident?

Why should I be out of mind because I am out of sight?
I am but waiting for you, for an interval,
somewhere very near,
just round the corner.

All is well.
Nothing is hurt; nothing is lost.
One brief moment and all will be as it was before.
How we shall laugh at the trouble of parting when we meet again

[i] Gordon Cox, “Listen: Conor McPherson on Bob Dylan and Why All Plays Aspire to Be Music” Variety, October 2, 2018.

Like Loading...
October 14, 2018 – 11:23 am | By Paul Kuritz | Posted in Acting, Books, Dance, from Paul, History, Music, Opera, Poetry, Quotations, The Gospel of the Kingdom, Theater, Theology | Comments Off on GIRL FROM THE NORTH COUNTRY – A THIN PLACE FOLK OPERA