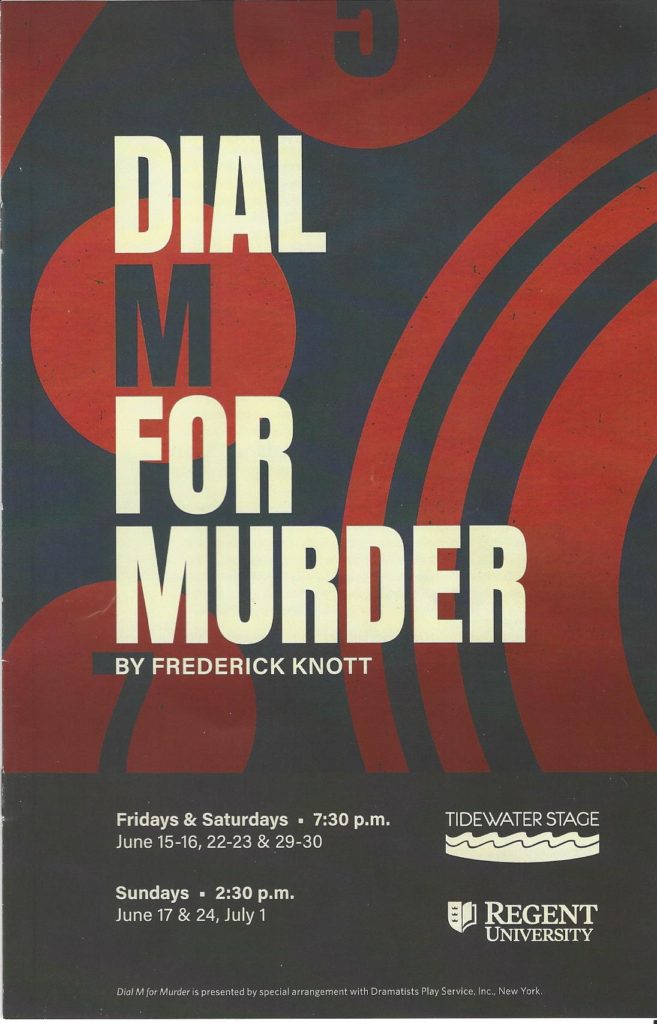 The history of film can be seen as an ongoing attempt to use technology to reproduce and distribute the power of live stage performance inexpensively to a wide audience. Before considering the work at Tidewater Stage, let’s look at the journey Frederick’s Knott’s tale took to get to Virginia Beach.

Sound film – the “talkies” was the first step. 3-D was the second.

Alfred Hitchcock’s 1954 film Dial M for Murder was originally planned to be one of the first new 3D films. It was filmed with the modern technology, with the new All-Media camera replacing the Natural Vision camera system which had shot The House of Wax two years earlier.

Hitchcock planned his shots with the innovative technology in mind:

The close ups for example will have to be scrapped completely. Can you imagine two normal sized heads on that big screen? They’d look like monsters. In that respect 3-D will be more like a stage play. But when you’re showing a lot of people at once, 3-D will be very effective. If the whole movie industry goes the way of 3-D, there will be a lot more panoramic films and a lot less intimate stories…. I think 3-D will be best when a movie is planned around these tricks instead of trying to fit them into a movie. I’d like to have a movie start this way: The screen is dark. There is no sound. All of a sudden, a large hand with extra long fingers reaches out and takes the audience by the throat. Think that would frighten you?

With Dial M for Murder, Hitchcock continued his championing of the latest cinematic technology. Every shot was carefully composed so that, with proper camera movement and very precise convergence, virtually error-free 3-D was achieved. Hitchcock’s daring use of unusual techniques makes this a landmark 3-D film. Hitchcock’s most obvious and effective 3-D moment comes during the murder itself. As the murderous intruder attempts to strangle Grace Kelly is forced back across her desk, and her frantic hand thrusts out at the audience as she tries to reach the scissors to defend herself. Hitchcock triumphed again.

In the meantime, interest in 3-D movies was beginning to diminish at the box-office. By the spring of the year, 3-D movies were on their last legs. The studios had stopped shooting in the process in late October and the few films still on the shelf were released flat or had very limited 3-D bookings.

On Monday April 26, 1954 DIAL M was previewed in 3-D and widescreen. The Hollywood Reporter noted Dial M for Murder is “…one of the few films in which 3-D is a decided asset, even though not a single audience-participation gimmick is used. The extra-dimension, coupled with the way Hitchcock uses the camera, gives the impression that one is sitting in a theatre watching a stage play.”

The World Premiere took place in Grace Kelly’s hometown of Philadelphia on Tuesday, May 18 at the 2,200 seat Randolph Theater. However, after only five showings the manager frantically contacted the studio and said that people were staying away in droves. He asked for permission to drop the 3-D and show it flat. Permission was given to throw away the glasses and hastily switch to the 2-D version. Whereupon business at the Randolph took “a turn for the better.”

However, the film was still available to any exhibitor who wished to show the depth version. In fact, in 2011 Warner Brothers began an extensive restoration of the 3-D print. The new  widescreen 3-D image is an accurate and faithful representation of what Alfred Hitchcock intended the world to see over sixty years ago.

This cinematic experiment in high technology began modestly with a first play written by the former captain of the Cambridge University tennis team, lawyer Frederick Knott. So modest was the play considered that every London producer who read the script passed on the chance to produce it. Discouraged, Knott took a friend’s advice and retooled it for television. Knott sent the play to the Drama Department of BBC Television, which produced it in March 1952, as a live studio broadcast (re-enacted within the week for a second performance, as videotape was not yet available and no kinescope recording had been made). After a single airing, Knott was besieged by the very producers who had passed on the first consideration of Dial M for Murder.

Meanwhile Alexander Korda had snapped up the film rights to the work. In the contract was the term that all stage productions of the play should cease once the film version was ready to screen.

With this caveat, the only producer daring to go ahead with a stage production was James P. Sherwood who had a theater, the Westminster, which he needed to fill. His Dial M for Murder opened in June directed by John Fernald and starring Alan McNaughton and Jane Baxter. This production was followed in October by a successful run in New York City at the Plymouth Theater, where Reginald Denham directed Richard Derr and Gusti Huber. (Maurice Evans saw the production and was determined to take Dial M for Murder to New York.) Korda agreed to waive the no-competition-with-a film version clause so that the play could enjoy an uninterrupted run of 552 performances with Mr. Evans as Tony Wendice, first at the Booth Theater, and then at the Plymouth Theater. Reginald Denham directed again with designs by Peter Larkin.

When Dial M for Murder closed in New York it began a thirteen-week tour of the United States with Richard Greene as Tony, Alan Napier as the Inspector, and Faith Brook as Margot Mary.

“Hitch’ saw the play in New York in the fall of 1952. Hitchcock reviewed three successive screenplay drafts. The first was credited to Hitchcock alone, the second to Hitchcock and Knott, and the last (as per the on-screen credit) solely to Knott. However, the final draft differs significantly from the completed film.

Unlike most stage to screen adaptations, no attempt was made to “open up” the story to exterior shots and additional locations. Hitchcock believed to do so would “show the holes” in the story. He decided to shoot the play as he did his film Rope.

Hitchcock filmed for Warner Brothers in 3D, starring Oscar winner Ray Milland. His first choice, Cary Grant, was vetoed by Jack Warner as more suited to light comedy. The relative new comer Grace Kelly filled the blonde heroine role favored by Hitchcock, with two actors from the stage version – Anthony Dawson as the crooked classmate blackmailed into murder, and John Williams reprising his Inspector, (which had brought him a Tony Award for his performance), added to the cast. (The two stage actors give the most compelling performances in the film.) Hitchcock favorite Robert Cummings played Mark Halladay, the second lead.

Of Hitchcock’s film, François Truffaut says “I enjoy it more every time I see it.” The central situations of Dial M for Murder resemble that of Hitchcock’s Strangers on a Train (1951):  a tennis player with an inconvenient wife, whose murder is to be executed by a disinterested third party. (In fact, Knott may have been inspired by the Hitchcock film.)

Watching the over fifty-year-old Hitchcock film now shows that, what was once alive and au courant, has now yellowed and collected dust. Sparkling contemporary performances now appear to be parodies of a distant period style. Film, like its ancestor photography, in an attempt to capture the aliveness of the present. However,  paradoxically film captures, instead, the process of aging and the slow journey to death.

Only with a live stage performance can the past live again. Actors, director, and designers – representing the present – summon the past and, in the process, together bring that past vividly alive for a contemporary sensibility.

That is what the artists at Tidewater Stage have done.

No matter how recently you may have seen the Hitchcock film, you should find this production vastly better in every way.

Knott’s tale relates an English marriage gone stale. The caddish husband, Tony Wendice, discovers that his wife, Margot, has been having an affair with a visiting American, Max Halliday. Wendice devises a perfect murder scheme to secure her estate.

But everything goes awry. The wife, played on the Tidewater Stage as an Audrey Hepburn type, but with depth, by the accomplished actress, Lynn Kenny Richards, fights back and kills her would-be murderer with a pair of scissors. In this production the murderer is cast against type. In his film, Hitchcock cast a man who seemed to be twirling an invisible mustache throughout. Here director Eric Harrell has cast a bookish Chris Bookless as Captain Lesgate. His performance resonates as a man who could easily change identities without raising anyone’s eyebrow. The husband is immediately forced to invent a clever Plan B in which his wife is framed for Lesgate’s murder.

Margot’s lover, the American writer Max Halliday, and Inspector Hubbard, pursue the loose ends. John Forkner, the area’s resident Hitchcock interpreter, plays the American with the same artsy speech inflection which characterized Bob Cummings’ film performance, but with much more zest and passion than ever entered one of Mr. Cummings’ performances. Mr. Forkner is quite quite good. Mark Zillges commands the stage with a presence and voice which call to mind  G.K. Chesterton. The audience loves his performance and so they should. He brings to the production all the film actor fails to deliver – an alive curiosity, a deceptive intuition, and great charm, as a stage ancestor of television’s Columbo.

But the play depends upon the actor playing Tony Wendice. Hitchcock was right to want Cary Grant and Cary Grant was right to sense the part was made for him. Scott Rollins brings abundant Cary Grant-ness to the role. He lies magnificently, and he could charm the serpent out of Eden.

Director Eric Harrell has masterly adapted the play to arena staging. With his designers he has set the play about ten years closer to our time. The furniture, properties and costumes are simply lovely. Kudos to David Foster and Doug Lynch. C.J. Hill has costumed Ms. Richards with beautiful outfitsand fitted each piece with care. The men’s attire is character-appropriate and equally well-fitted to each body type. (This is the best work, of several fine productions, I have seen Ms. Hill dress.) The actors move easily throughout the space, never ignoring an audience side for more than a second or two, and projecting well to be heard throughout, without seeming to shout.  The tempo rhythm is perfectly tweaked for suspense, aided by Stephen Peppos gripping, but subtle, sound design. Jeff Brangan’s lighting reveals just enough for a thriller to work, and conceals just enough to maximize the dramatic surprises.

Tidewater Stage continues its tradition of presenting first-rate theatre with the new Dial M for Murder.

Frederick Knott’s play has never had it so good. This is a production which would be cheered in any city in America.