THE MET’S MADAMA BUTTERFLY: THE POWER OF UNIVERSALS 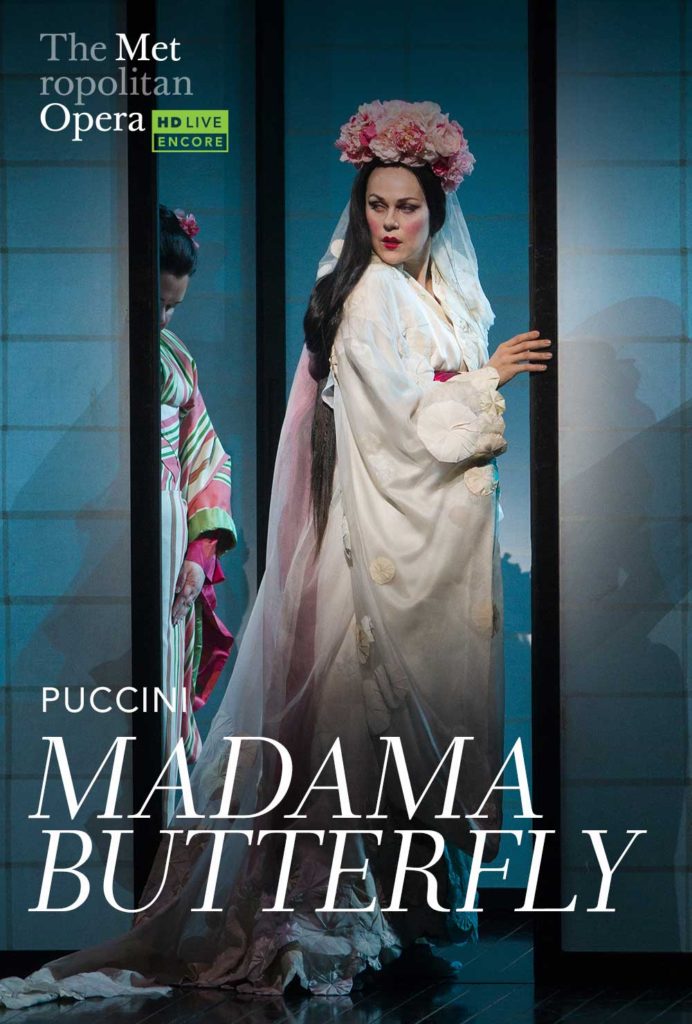 The most recent study names Puccini’s Madama Butterfly as the sixth most popular opera in the world. In fact, seeing the opera at the age of sixteen prompted Yoko Watanabe (1953-2004) to a singing career, eventually to the position of the most famous of Japanese opera singers, certainly to be one of the most acclaimed interpreters of Puccini’s Cio-Cio-San.

The rerun of the Metropolitan Opera’s 2016 Madama Butterfly demonstrates why Puccini’s work is one of the most popular of all operas. Madama Butterfly charms its audience, paradoxically by focusing on a horrific situation and a tragic response. The late Anthony Minghella’s production, especially the direction and choreography of his wife Carolyn Choa, is simply dazzling in every regard.

From the opera’s origin as a very popular play by the great American director-playwright David Belasco,  audiences have recognized the source of the work’s power. In his Life of David Belasco, theater critic William Winter summarizes the plot:

‘A man commits the worst and meanest of all acts, the wronging of an innocent girl, and then deserts her.”[i] The Japanese characters in the drama consider U.S. naval Lieutenant B.F. Pinkerton to be “a barbarian and a beast.”

In the course of Puccini’s opera, the audience comes to share that opinion. Audiences throughout the world, and of all times, have come to that same opinion of  Madama Butterfly. Why?

Because of an undeniable fact, despite the fact’s denial ( “cultural appropriation”, et alia) by the elite’s current  fashionable social position:

“God has imprinted on the human heart commonalities among us. Theologians and ethicists call this the natural law. In human behavior, these are universal behaviors.”[ii]

Biographer Winter continues to offer support for this fact:

The entire performing experience uses universal means to create the universal effect. Based on the recollections of his sister’s stay in Japan as the wife of a Methodist missionary, John Luther Long penned the short story used by American David Belasco for his play. Italian Giacomo Puccini turned the stage Madame into the operatic  Madama, casting Hungarian Elza Szamosy to sing, in Italian, the role of the Japanese young woman, Cio-Cio-San. These spontaneous international collaborations and appreciations were only possible because the work contains universal elements, transcending times and places.

America’s first great Cio-Cio-San, Geraldine Farrar of Melrose Massachusetts, spent a great deal of time in researching for her role under extensive tutelage. In her autobiography her mother writes of Geraldine

“She had a co-worker, a delightful; little actress, Madame Fu-ji-Ko, whose dainty personality and grace were her model for authentic gesture and carriage…She shuffled, posed, danced and gesticulated under the watchful eye of the Japanese artist, herself in native costume. A mighty pretty picture they made. These two were so eager and intent upon their work, I had their luncheon and tea brought to them on trays, insisting they stop long enough to have some nourishment.”[iv]

The current Met production was dreamed by the late Anthony Minghella, the son of an Italian ice cream maker, and features the great Latvian soprano Kristine Opolais and the great French tenor Roberto Alagna. Thus his Madama Butterfly continues the opera’s cross-cultural production tradition. Probably the most effective aspect of this total sensory experience is the over-arching vision of director and choreographer Carolyn Choa, Minghella’s multi-talented wife.

One could not wish for a more effective cast. Ms. Opalais looks and sounds beautiful and, while battling her wig during some of Part I, manages to turn in an overwhelmingly powerful performance. Likewise, Roberto Alagna, the handsome heroic tenor-of-all-handsome- tenors, has a voice that rings like a bell, as he charms the audience along with Cio-Cio-San. The production has great depth in its cast. Veteran baritone Dwayne Croft offers a powerful and sympathetic Sharpless, while mezzo-soprano Maria Zifchak anchors the production as the trustworthy confidante Suzuki. Ms. Zifchak could have stolen the production had she not been surrounded by such a first-rate cast. She faithfully represents the audience as she roots for, and vainly tries to rescue, Cio-Cio-San from her inevitable fate.

If Robert Wilson’s monumental Madama Butterfly drew upon Japan’s Noh Theatre for inspiration, Mr. Minghella’s draws upon many of the remaining Japanese theatrical traditions for his stage work.  Canadian scene designer Michael Levine employs shoji, sliding Japanese doors with great imagination and effect. The vibrant color palate of New York fashion designer Han Feng’s costumes draws upon the wild Kabuki for its reds, greens, and blues which dominate  the lovely but monochromatic settings. Kuroko, the black costumed stagehands of Bunraku puppet theater, are “everywhere present”, smoothing the action along, and brilliantly manipulating the various puppet characters, especially the one playing Cio-Cio-San ‘s three-year-old son. The puppeteers of the Blind Summit Theatre, directed by Mark Down, deserve credit for animating the puppets to integrate emotionally with the live actors on stage. Lanterns, ribbons, and parasols are all part of the elaborate choreographic world created by Mr. Minghella’s company. The monumental Puccini music is supervised eloquently by the Gibraltian conductor Karel Mark Chichon.

Shelley observed that opera, like all great art, “teaches the human heart the knowledge of itself.

And that knowledge is universal.

Critics sometime complain when opera companies continue to offer the public the same  works year after year. They insist on new works. But, as Ezra Pound observed, it is the classic work of art which is “news that stays news.”

These critics fail to realize that, while the operas themselves might remain the same, the human hearts, the human souls, the nous, which experience the operas, are different each time. One’s heart is different at one’s first La Boheme, as it is different at the La Boheme of middle age. And it will certainly be different for one’s last La Boheme. Living prepares the heart to hear and see anew at each new time of life. For example, as a young man I was very impatient with Amanda in The Glass Menagerie. I found her overbearing and bossy. As a parent I saw her as a loving parent worried about how her two idle children might fend for themselves after her death.

Great art is a gauge which  measures our humanity. It is not for us to judge the art. Rather we are being judged by it. The universal truths in Madama Butterfly have been adjudicating the humanity of men and women of all ethnicities and places for over a century.

May Madama Butterfly do it for another century, at least.