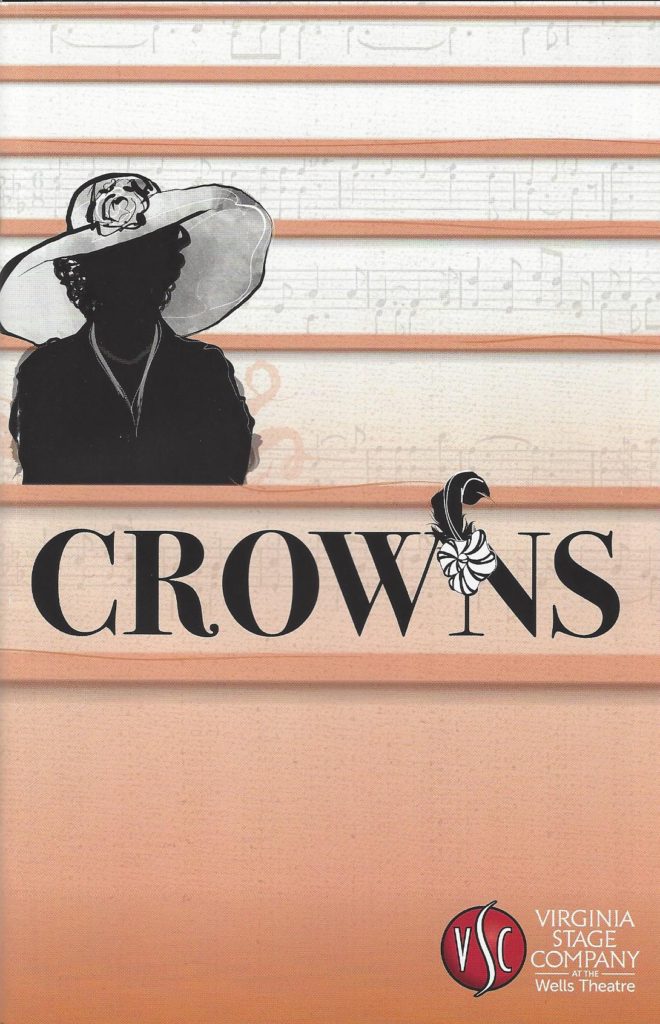 In his first letter to the Thessalonians, Saint Paul asked,

For what is our hope or joy or crown of boasting before our Lord Jesus at his coming? Is it not you?

Saint John Chrysostom explained that, ”he who will not seek in the well being of his neighbor his own benefit will not attain to the crown for this reason: God himself has so decided that human beings should be mutually bound together.”

Originally a co-production among the Goodman Theatre, the McCarter Theatre, and the Second Stage Theatre, Crowns grew from  the book Crowns,  subtitled “Portraits of Black Women in Church Hats”, with photographs by Michael Cunningham and text by journalist Craig Marberry.

In 1998, North Carolina photographer Cunningham began taking pictures of women in their hats. His friend, journalist  Marberry, thought they should put together a book of the photos and the stories behind them. Marberry was curious why so many African-American women wear flamboyant hats to church.

In resultant book, pastor wife Shirley Gaither says “I wear hats every Sunday because I want to set an example. The Bible says, “Women, adorn yourselves in modest apparel.”

The tale relates how seventy-three grandmother Shaw rescues and redeems her 17-year-old granddaughter from the mean streets of Brooklyn by taking her to the comfort of a southern Christian community of women, so that, as St. John Chrysostom says, they “will pursue one another and not be torn apart.”

After just four years Crowns had become the most produced musical in the United States. The hat-wearing women testified in theaters all over the United States. Their hats were sanctified as their glorious crowns of reward, and  Christ rejoiced at their faithful actions toward Yolanda and other lost and broken souls,

The production we saw at Cleveland’s Karamu Theater in June 2013 was our introduction to Crowns. Unlike Terrence Spivey’s production, the  Crowns of Raelle Myrick-Hodges gives more attention to the Orishes of the Yoruba religion than did Karamu. Nevertheless, the gospel truth comes through loud and clear, thanks to one of the most sparkling and uniformly excellent productions we have seen in Virginia.

Director Myrick-Hodges is a clear master of what she does. She has found a scene designer in Josafath Reynoso who has created a stunning suggestion of a post-modern sanctuary, in which tradition Christian iconography and images are replaced in stained-glass windows of bold Chagall-like patches of intense color. The lighting of Jason Amato beautifully tracks the changing locations and characterizations subtly, but effectively. Resident Costume Designer Jeni Schaeffer produces the best work we have seen from her to date. Sound designer Jae Shanks has managed to produce a clear, full, and profound sound. Musical director Roy George and choreographer Polanco Jones, Jr. could not have done more to ensure that Crowns was all that Regina Taylor wanted. The movements were spare, but precise and telling, while the music captured the mood and energizing spirit of the redemption process.

Led by the dynamic T’Kyeah Crystal Keymah as Mother Shaw, whose performance was a knockout throughout the production, the rest of the cast was top notch as well. Sheila Lee as Mabel was a veritable firecracker in the thrall of the Holy Spirit. Amma Osei ‘s Velma stopped the show with a deep bluesy version of 1905’s “His Eye is On the Sparrow”  by lyricist Civilla D. Martin and composer Charles H. Gabriel. Nicole C. Julien’s Wanda and Meredith Noel’s Jeanette were stars in their own right, moving deftly from one character and situation, from one song to another, while the lone male actor Derrick Cobey made up for being outnumbered by possessing the theatrical and musical talent of six leading men. Norfolk State University’s sophomore Ja’Keetrius Woods held her own as Yolanda amid the barrage of professional skill and experience surrounding her.

James, the brother of Christ, wrote,

Blessed is the man who remains steadfast under trial, for when he has stood the test he will receive the crown of life, which God has promised to those who love him.

The Wells Theatre audience would have stayed until the cows came home, so in love were they with the musical play and the performers. The love of God on display clearly blessed those in attendance.

Crowns for all concerned.