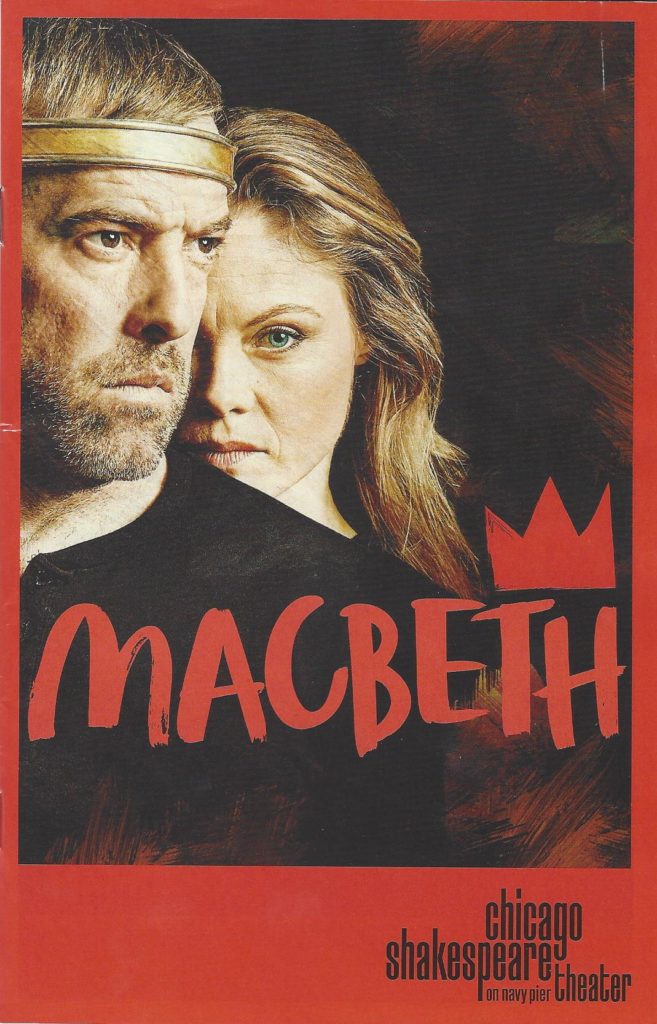 Viewed in the context of his other work, Macbeth is Shakespeare’s Descent into Hell. And since it is his Inferno, it is appropriate that the terrestrial and celestial parts of his universe should figure slightly.[i]

Those words by University of Chicago Shakespearean scholar Harold Goddard summarize the production Aaron Posner and Teller have created at the Chicago Shakespeare Festival. Macbeth is their second Shakespeare collaboration in Chicago. The Tempest was their first. Macbeth arrived after playing at the Two River Theater Company in Red Bank, New Jersey and the Folger Theatre in Washington, D.C.

Seems an obvious goal, but most directors can’t reach it with the consistent masterly skill and high style of Posner and Teller.

They may have been attracted to Macbeth because Yale Shakespearean Harold Bloom maintains that “no other drama so engulfs us in a phantasmagoria.”[ii]  Macbeth is Shakespeare’s “unluckiest protagonist precisely because he is the most imaginative”[iii]

When a man of imagination – by which I mean a man in whom that image of God is distinct – stoops to crime, instantly transcendental powers rush to the scene as if fearful lest this single deed shift the moral center of gravity of the universe, as a finger may tip an immense boulder that is in delicate equilibrium.[iv]

Macbeth consistently says more than he knows, but he also imagines more than he says, so that the gap between his overt consciousness and his imaginative powers, wide to begin with, becomes extraordinary.[v]

Every production element in the directors’ work reveals Shakespeare’s “overwhelming conviction that behind the visible world lies another world, immeasurably wider and deeper, on its relation to which human destiny turns…The visible world – now hides this other world as does a wall, now opens it as does a door. It is there – not a matter of philosophical speculation or of theological tradition or hypothesis, but there as a matter of psychic fact.”[vi]

The Chicago Shakespeare directors place this dichotomy at the center of this production. Director Aaron Posner has said “’Nothing is but what is not,’ and ‘Fair is foul and foul is fair” What’s illusion and what’s real? Those lines have shaped our entire approach into this play.” Co-director Teller agreed: “The Macbeths are subject to illusions and hallucinations. They mistake what the reality of situation is, and think that they can take the witches’ prophecies as straight information.”

Teller explained why this production is so special to watch: “Here’s what always usually gets missed in ‘Macbeth…He’s usually depicted from the start as a gloomy kind of fellow. But he’s not. He’s a golden boy. He’s practically the next in line to become king. People always take away the fact that the story ends up as tragic and dark and then use that as an excuse for doom and gloom. But there are jokes in there. Funny jokes. You should know. Right after the murder of Duncan, the next morning, when everyone is going through this post-traumatic-stress thing, the two locals talk about how scary the night was. But Macbeth responds to them: ‘It was a rough night.’ Is that not a comedic understatement, a wonderful piece of black humor, right there in the text? …We just follow Shakespeare’s directions down to the letter. If they say that an apparition comes out of a cauldron, then an apparition comes out of a cauldron. But we do go a bit further than that, round a corner more into the characters’ mind’s eyes. So if Macbeth sees a dagger in his mind, then we see the dagger, too”[vii]

In this production we see Macbeth and Lady as “the happiest couple in all Shakespeare.”[viii] Only when they are affected by their choices does their bliss turn into blood. Goddard agrees”

Of all Shakespeare’s plays Macbeth is most a “tragedy of blood”, not just in its murders but in the ultimate implications of Macbeth’s imagination itself being bloody. The usurper Macbeth moves in a consistent phantasmagoria of blood. The play seems Christian not for any benevolent expression but only insofar as its ideas of evil surpass merely naturalistic explanations…. God is exiled from Macbeth, not denied or slain.[ix]

While not overtly Christian, this Macbeth illustrates St. Paul’s warning to the Ephesians:

For we wrestle not against flesh and blood, but against principalities, against powers, against the rulers of the darkness of this world, against spiritual wickedness in high places[x]

St. John Chrysostom’s explanatory observation is demonstrated in this production of Macbeth. “The struggle is not about riches, not about glory, but about our being enslaved. And thus, is the enmity irreconcilable…Observe how the power of the enemy startles us; how it makes us all circumspection, to know that the hazard is on behalf of vast interests, and the victory for the sake of great rewards. For he is doing his best to cast us out of Heaven.”

The Macbeths we see on the new stage of The Yard are subject, like all of us, to our passions “Passion means originally the capacity to be affected by external agents. In this case Macbeth is a play about human passion…Macbeth is at bottom any man of noble intentions who gives way to his appetites. And who at one time or another has not been that man?”[xi]

The cast is all new, but for the thrilling Macbeth of Ian Merrill Peakes, fresh from his triumphs in New Jersey and Washington D.C. Mr. Peakes is certainly now in the front ranks of American Shakespearean actors. And with good reason. He can command the stage in all moods without ego or swagger. He has mastered iambic verse to the point that it truly seems his native-born manner of speaking. Around him the supporting players rise to his level of excellence.

Chaon Cross’ spellbinding Lady Macbeth, after grieving over a dead child, rightly treats her husband more as her child than as her mate. Their passion for one another animates much of the action. The MacDuff family stands out in this production. Give great applause to Timothy D. Stickney, Jennifer Latimore, Phoenix Anderson, and Micha Wilson. The Porter of Matthew Floyd Miller continues the Chicago Shakespeare Theater’s tradition of excellence in characters who can tread the line between text and free-wheeling improvisation when interacting with the audience. He is a joy to watch.

Everyone in the cast is first rate; in sum, Bob Mason has cast very well. Top drawer as well is the scenery of Daniel Conway, the costumes of Mara Blumenfeld, which represent “none-and-all” ages at once, Thom Weaver works auditory magic while Matt Hawkins does the same with light. The verse speaking coached by Susan Felder couldn’t be better.

[viii] Bloom, Harold. Shakespeare. The Invention of the Human, p. 518.

Like Loading...
May 23, 2018 – 2:46 pm | By Paul Kuritz | Posted in Acting, from Paul, History, Poetry, Quotations, The Gospel of the Kingdom, Theater, Theology | Comments Off on CHICAGO SHAKESPEARE’S MACBETH: Imagination’s Descent into Hell