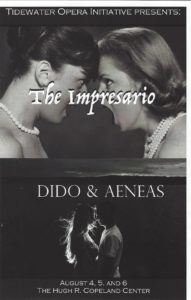 If you need proof as to the truth of Henri Matisse’s observation, “Creativity takes courage,” you need go no further than the weekend performances at Norfolk’s funky Hugh R Copeland Center of Mozart’s Der Schauspieldirektor and Henry Purcell’s  Dido and Aeneas.

The Tidewater Opera Initiative (TOI), a self-described “boutique opera company”, presented the pair of one act operas, one of which was  first seen by Emperor Joseph II, here translated as The Impresario, and cleverly and tastefully brought up to date by director Shelly Milam-Ratliff. The other short opera, Purcell’s only opera, Dido and Aeneas, a serious piece which, in the late 17th century, began the history of English opera when it was presented by the students for whom it was written.

Joseph II, the Holy Roman Emperor, set up a high noon of opera: at one end of the hall, the German singspiel, represented by the one act comic parody by Wolfgang A. Mozart and, at the other end, an Italian opera buffo, represented by a one act comic opera by Mozart rival, Antonio Salieri.

Director Shelly Milam-Ratliff cleverly connects the TOI’s  two one-acts by offering the Mozart first. The would-be actors in The Impresario are auditioning for a forthcoming production of Dido and Aeneas.

The Impresario is a “comedy with music” first performed in the Schonbrunn Orangerie in Vienna on 7 February 1786 — some three months before the premiere of The Marriage of Figaro. Like Moliere’s L’Impromptu de Versailles  (1663), the short opera pokes fun at the arrogance, pettiness and greed regularly displayed by actors and singers, especially sopranos. (How many sopranos does it take to change a light bulb? One. She holds the bulb while the world revolves around her). The impresario Frank (Sarah Kingsley) is casting, two singing actresses sing, and haggle over the contracts. One singer, Madame Herz (Anna Feucht), is the self-appointed grand dame of local opera,  while Mademoiselle Silberklang (Erin Hannon), claims to be an opera novice. They audition with arias and expect to be offered positions with the company. In a third musical number, a trio, the two sopranos argue over who will be the prima donna, while the tenor, Monsieur Vogelsang (Michael Gray), here played as a wealthy Rhett Butleresque fat cat, tries to mediate his two lovers. A truce arrives in the last scene, which concludes with a vaudeville quartet including the theater’s technician, baritone Steven Field, happily left to play Aeneas by default.

Director Milam-Ratliff moves her singers easily about the stage. Sarah Kingsley’s impresario is appropriately worried and despairing, Steven Field’s baritone is gentle and unassuming, as he shifts articulation levels between his speech and his singing. Michael Gray exudes sly lust and a charming voice as he and Mr. Field gently insinuate themselves into the duet, making a seamless quartet of it. Anna Feucht sends up the image of the pompous diva with a flair for comic timing and a strong vocal technique. Erin Hannon plays the newbie as an empty-headed bimbo, a Marilyn Monroe type with Bernadette Peters’ hair. When she sings she offers the greatest vocal shock since Jim Nabors’ Gomer Pyle revealed a rich baritone singing voice on February 24, 1964. Across America one could hear jaws drop as he sang Santa Lucia. The same jaws dropped in delight when Erin Hannon revealed her gloriously incongruous, dramatic/lyric soprano voice.

Taking a plot from Virgil’s towering Aeneid, Purcell’s classic music accompanies a bizarre libretto by the odd Nahum Tate. Mr. Tate liked to “improve” others’ stories, most famously Shakespeare’s King Lear, to which he gave a happy ending. Here, to Virgil, he adds a Sorceress (Adrienne Kerr), a choral coven of apprentice witches, and an evil spirit (Sarah Kingsley). Unlike the duty-bound Aeneas of Hector Berlioz’ transcendent The Trojans (1856), 1696’s Aeneas  leaves Dido to her fate  because he has been bewitched by the evil Sorceress and her minions. For Berlioz, it is duty which triumphs over love; for Nahum Tate, evil wins the day.

In fact, no period of English history saw a wider interest in both the theory and the practice of witchcraft than the years between the ascension of James I ( for whom Shakespeare wrote Macbeth), and the subsequent Glorious Restoration of Protestants William and Mary. Following Shakespeare’s lead, Tate’s inclusion of a Sorceress in the tale is a clear attempt to curry favor with the superstitious court.

Attempting to link the two operas, director Milam-Ratliff incorporates silent comic tropes of action both between scenes and in the “off stage” spaces. While the approach is clever, it also sends confusing signals to the audience as to how it is to regard the main tragic action of Dido and Aeneas.

Stephanie Marx’s singing of Dido reveals a mature voice and an experienced stage performer. Steven Field’s Aeneas more than holds his own in his scenes with her. Christina Bartholomew’s Belinda, Denise Battle’s Second Woman, and Lindsay Marie Kowalski and Nerissa V. Thompson reveal the depth of singers within the TOI company. Michael Gray brings his lovely and gentle tenor voice to the Sailor, while Adriane Kerr appropriately milks the Sorceress for all the ghoulish humor she can find.

Stephen Cook on piano, and the string quartet of Beth Austin, Jeff McLaughlin, Bryan Williams, and Joseph Bray play well and supply the appropriate ambience for each period opera.

Their work could not be more important nor worthy of support.

A bit of talent, an opportunity, and some loving encouragement can go a long way.

Who would have guessed that an 8th grade juvenile detainee from Suffolk would parlay his fascination with C.S. Lewis’ heroic Chronicles of Narnia to lead him to the heroic sagas of the world operatic repertoire as a student in Norfolk’s Governor’s School of the Arts, then to a Master of Music degree from Florida State University, a Bachelor of Music degree from the Hartt School of Music, and membership in the Metropolitan Opera Lindemann Young Artist Development Program.

Now you can see him on the stages of the Metropolitan Opera and Vienna’s Staatsoper.

Hampton Roads’ Tidewater Opera Initiative’s mission is to give every young vocal artist the chance to be the next Ryan Speedo Green[i].

[i] Daniel Bergner. Sing for Your Life. A Story of Race, Music, and Family. New York: Little, Brown and Company, 2016.