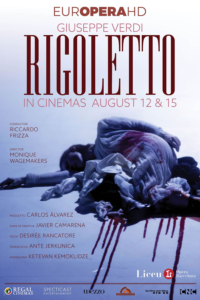 The Rigoletto at Barcelona’s elegant Gran Teatre del Liceu reminded me again that Verdi can be considered the Shakespeare of opera.

Not only did he compose a Macbeth, Othello, and Falstaff, but his great fondness for King Lear was spread among several operas. The king driven mad by his evil daughter centers Nabucco, while Rigoletto presents the old grieving father cradling his dead daughter’s body.

Director Monique Wagemakers displays a keen eye for visual beauty and composition in a production free from any sit-down pieces and properties, save a pen, diary, and letter. Minimalism is the key, and elegance, especially through Michael Levine’s bold minimalist setting and Sandy Powell’s homage to silk costumes. The eerie chorus bodes ill as an almost zombie-like presence.

Carlos Alvarez’s Rigoletto eschews the traditional split personality (nasty at work, kind at home) in favor of a consistent characterizations which loses the motivation for revenge among the courtiers. His daughter Gilda (from Shakespeare’s Cordelia) is a sweet fresh innocent as played by Desiree Rancatore. Javier Camarena’s Duke walks away with the vocal honors. Not even close.