Lyric Opera’s THE TROJANS: The “Most Profoundly Moving Experience” 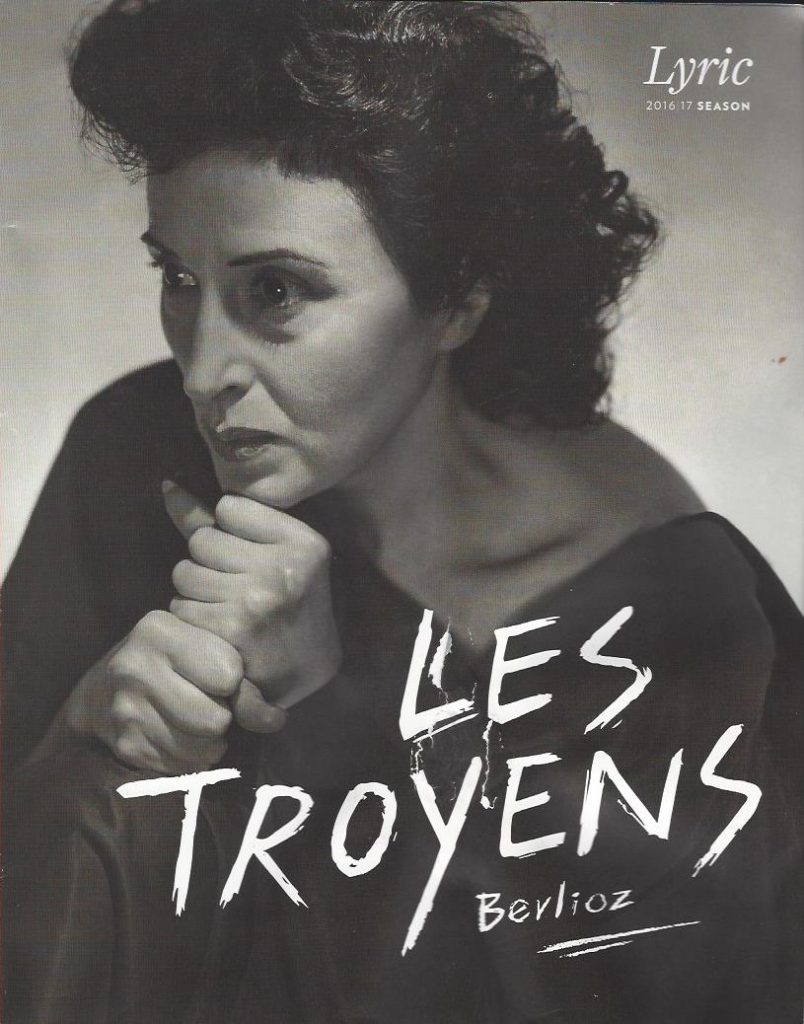 “For grandeur of conception, nobility of tone, and imaginative range [Berlioz’ The Trojans] has scarcely a rival in operatic history.”[i]

The words of the great musicologist Winton Dean would seem impossible to fulfill in production. But, after seeing the Lyric Opera of Chicago’s brilliant production of The Trojans, Mr. Dean may have been understating the greatness of Berlioz’ accomplishment.

As a young boy, Hector Berlioz (1803-1869) was fascinated with Virgil’s great epic tale,The Aeneid, in much the  same manner young boys are today fascinated by J.R.R. Tolkien’s Lord of the Ring. The characters were so real to him that he would “imagine they knew me, so well did I know them.” Berlioz and his father spent many hours in intense study of the work, considered one of the supreme foundational myths of European civilization:

“How often, construing to my father the fourth book of the Aeneid, did I feel my heart swell and my voice falter and break! . . . When I reached the scene in which Dido expires on the funeral pyre, surrounded by the gifts and weapons of the perfidious Aeneas…and I had to pronounce the despairing utterances of the dying queen … my lips trembled and the words came with difficulty, indistinctly. At last, at the line, ‘Quaesivit coelo lucem ingemuitque reperta,’ at that sublime image – as Dido ‘sought light from heaven and moaned finding it’ – I was seized with a nervous shuddering and stopped dead. My father, seeing how confused and embarrassed I was by such emotion, but pretending not to have noticed anything, rose abruptly and shut the book. ‘That will do, my boy,’ he said, ‘I’m tired.’ I rushed away, out of sight of everybody, to indulge my Virgilian grief.”

As a middle-aged composer, Berlioz began to toy with the idea of an operatic treatment of his favorite story. Finished in 1856, the full opera was never performed during Berlioz’ lifetime. Not until 1898, in Germany was the complete Les Troyens performed. Not until 1921 were both complete halves of the great opera staged together in Paris; not until 1935 in the UK; and not until 1962 in the United States. Les Troyens was staged  in 1990 for the opening of the new Bastille Opéra in Paris.

“Pietas”, duty (not destiny), is the subject of both Virgil’s great poem and Berlioz’ great opera – duty to father, duty to followers, duty to country, and duty to God.   Unfortunately, the virtue of duty has been a casualty of the modern age, so readers and viewers may wonder at the attention given this antique virtue in Virgil’s great work.

According to Virgil, and as experienced by Berlioz, the sacred relationship between father and son is the basis of both true patriotism and true faith. “Duty-bound Aeneas” struggles against personal passions and furors in favor of his duty.

“in terms of a series of tableaux rather than a unified whole. It is like a film in which time and again the camera lingers over a beautiful shot and then shifts to another of perhaps equal beauty without supplying an adequate connection…The whole is braced together by the idea of the continuity of Troy and the city’s refoundation at Rome; the gods have imposed this duty on Aeneas, and to all personal happiness must bow…. Berlioz was born out of time, a Classic in a Romantic age, who necessarily rejected this conflict in his art. Hence perhaps the element of profound melancholy.”[ii]

The Trojans places vocal demands on its performers similar to those of a Wagnerian opera. “Berlioz writes exacting parts for the singers without ever allowing them to show off; he is never sentimental; he never aims at a cheap heart-throb.”[iii]

Fortunately the Lyric Opera has a star trio anchoring the uniformly stellar cast: Christine Goerke gets the ball rolling as the tormented princess Cassandra. Ms. Goerke more than fulfills the role’s histrionic demands with a haunting performance. Leading the Trojans away from the Greek army is the Aeneas of Brandon Jovanovich, looking like an all-American World War Two army poster boy, Mr. Jovanovich sings magnificently. In Carthage awaits the beautiful queen Dido (Susan Graham), struggling to maintain her duty to remain “a widow-chaste”. Throwing herself into the affairs of state, Dido rejects the suggestions of her sister Anna (the charming Okka von der Damerau) that she find a husband-king. When Aeneas arrives, Ms. Graham’s struggle ends in her hero’s arms, but not before a display of remarkable acting and singing.

The rest of the cast is superb, especially Bradley Smoak as the Ghost of Hector. His physicalization matches his vocalization to startling effect. Lucas Meachem (Chorebus), looking like Indiana Jones, gives the wooing of his fiancé Cassandra a poignant interpretation.

The expanded Lyric Opera Chorus, under the masterful hand of Michael Black creates a wide variety of populations in a range of extreme dramatic situations, all the while singing at the highest level.

Conductor Sir Andrew Davis received a crescendo of bravos and applause as he returned for each new act, culminating in the most rousing appreciation at the curtain call. Making magic from a score which has been called little more than a “caricature”, Sir Andrew must receive the lion’s share of the credit for this musical theater triumph.

Sharing almost equally must be the stage director Tim Albery and his design team – Tobias Hoheisel (sets and costumes), David Finn (lighting design), and Matt and Rob Vale’s Illuminos (projection design). The designs beautifully unite the two halves of the epic story with imagination, zest, economy, and above all, beauty. Mr. Albery’s placement and movement of his actors is striking. No piece of music ever seems extraneous; all has compelling onstage action with it. No loitering or wandering may be seen under this master’s hand. Mr. Albery gives great attention to characters’ entrances, creating some of the most memorable in memory. The entrance of Andromache (Holly Curan) and her son, the entrance of Hector’s Ghost (Bradley Smoak), to mention but a couple, have been given loving attention.

At the end of the over five-hour emotional roller coaster ride through the seedbed of Western civilization, one must agree with Winton Dean again. The Trojans is “one of the most profoundly moving experiences in the musical theater.”[iv]

In a narcissistic age characterized by the “selfie”, The Trojans defiantly celebrates one’s duty to others.

The words of Saint John of Kronstadt summarize the importance Berlioz gives to  the virtue of duty in his musical tribute to the mighty Aeneas:

Man is duty personified… Man is for the greater part, not the son of freedom, but the slave of necessity and duty.”[v]

[v] St. John of Kronstadt, My Life in Christ.

Like Loading...
November 22, 2016 – 1:24 pm | By Paul Kuritz | Posted in Art, Books, from Paul, History, Men and Women, Music, Opera, Poetry, The Gospel of the Kingdom, Theater, Theology | Comments Off on Lyric Opera’s THE TROJANS: The “Most Profoundly Moving Experience”