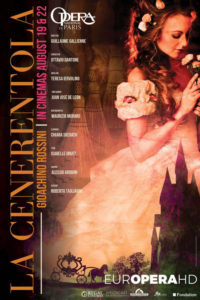 Napoleon is dead, but a new conqueror has already shown himself to the world; and from Moscow to Naples, from London to Vienna, from Paris to Calcutta, his name is constantly on every tongue. The fame of this hero knows no bounds save those of civilization itself; and he is not yet 32!

The 1823 words of the novelist Stendhal about the young Gioachino Rossini seemed excessive.

The Lyric Opera’s production of the Rossini classic, as produced by the Spanish team of Joan Font, director, Joan Guillen, sets and costumes, Albert Faura, light, and Xevi Dorca, choreography was a joyous delight. Isabel Leonard was born to play Cinderella and the Don Ramiro of Lawrence Brownlee was sung beautifully.

But then director Guillaume Gallienne,  the 513th member of the Comédie-Française, noticed that the great opera is described as a drama giocoso, a serious play with jokes, not as often played, an opera buffo, pure comedy.

I see in it more an alternation of grotesque and gravity, inherited from Goldoni. I wanted, with Éric Ruf who imagined the setting, to place the action in a decadent palace, whose traces of a past splendor have something painful. On the floor of the ashes, not so much that of the hearth as that of a volcano.

The result is a centennial production of La Cenerentola worthy of Stendhal’s praise. Bordering on the verismo, with an occasional vaudeville turn, Gallienne’s production most resembles John Weldon’s Much Ado about Nothing (2013) film, recalling the dour Italian cinema of the Sixties, with scenes employing the visual language of film noir. Like Weldon, Gallienne, through inspired casting and careful attention to startling characterizations, breathes fresh life into a much-loved tale, charging it with a modern ethos and energy that situate it among the very best adaptations of Rossini’s work.

Gallienne is ably assisted by designer Éric Ruf. Since 2014 Ruf has been the principal Director of the famous Comédie-Française. They set the drama in Naples, literally atop the dormant, but threatening,Vesuvius.  This “cinder”ella plays on a floor of ashes.  A large decrepit rusting palazzo serves as a backdrop, while an esplanade with enigmatic scaffolding represents the prince’s court.

Costume designer Olivier Bériot removes color  from the sun-bleached townspeople’s garb. Angelina, a sweet lump of a girl, has all the visual  pizzazz of a large, mostly inert, lava flow. The court arrives like a somber visit from the local mafia. The town’s women folk emerge wearing all sorts of dated wedding gowns to lure the eye of the wife-seeking  Prince Ramiro their way..

Gallienne’s cast is of uniformly excellent actors. Angelina has been martyrized by her guardian – the parodically named Don Magnifico (played with vaudevillian panache by Maurizio Muraro). Angelina has been harassed by her evil half-sisters, Clorinda (Chiara Skerath) and Thisbe (Isabelle Druet). Nevertheless, this Cinderella (Teresa Iervolino) finally triumphs.

Angelina/Cinderella is transformed into a princess by the mysterious Alidoro (Roberto Tagliavini), here presented as a Christ-like figure in long pauper coat. But, by the time of her wedding, this Angelina, an almost dim-witted Cinderella as conceived by Guillaume Gallienne, will have suffered, suffered, and then suffered some more.

To her rescue come Dandini (Alessio Arduini), Prince Don Ramiro’s groom, disguised as a Mafia Don-like prince, along with the actual  Don Ramiro (Texan Juan José De León),  disguised as a groom. Identities are switched in order to learn the true natures of the women competing for the prince’s hand.

The extraordinary acting abilities of  these singers almost overshadow their first-rate vocal skills. Opera critic Fred Plotkin has commented on “the fiendishly difficult technique and style that proper Rossini singing requires.” These singing actors perform fearlessly, and, as a result, the audience is charmed and delighted.

Rossini was just 25 years old when he wrote the music for La Cenerentola in only 24 days.

At the Opera Garnier, his century-old opera feels like a youngster sowing wild oats.