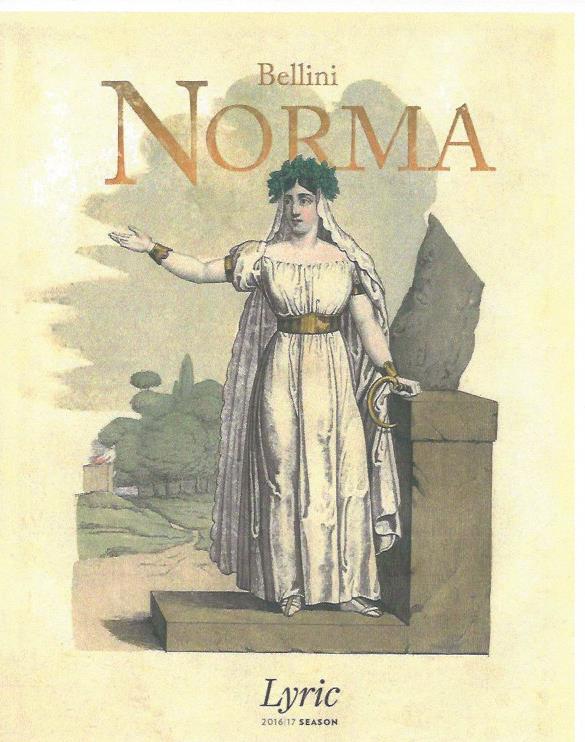 But thanks to Chicago sopranos, that opera has become a standard of the American operatic canon.

Written when Bellini (1801-1835) was just thirty years old, Norma had played in Chicago since the mid-nineteenth century by various visiting opera companies.

But not until Chicago had its own company – the Chicago Opera Association – would a singer bring the great role to international prominence.

That singer was Rosa Raisa (1893-1963), on the 1920 tour with the Chicago company in New York City, preparing to sing for the usual savage reviews the New York newspapers saved for all Chicago operas.

However, Ms. Raisa’s Norma knocked the New Yorkers out:

She is a striking looking, stately Norma… She is voice and nothing but voice.

Raisa “is the greatest opera singer of the day next to Caruso. She has no rivals.” 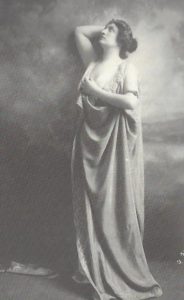 Vocal splendor broke over the Auditorium in great waves at the New Year’s Eve performance when Rosa Raisa rejoined the opera company and proved in a magnificent display of Bellini pyrotechnics that she is one of the great artists of all time. All that we dream about in a prima donna is Mme. Raisa, of radiant beauty, queenly graciousness and glorious voice. Hearing her Norma makes us wonder how we got along without her all these operatic nights of her absence, but she makes up for our loss by coming back in better voice than ever. Her amazing dramatic soprano sparkled with color, flashed with emotion and fairly dazzled by the disdainful ease with which it surmounted one of the most difficult roles of all opera. Truly, having her back gives new zest to the waning season—the entire repertoire takes on fresh inter­est with her return.

Thirty-six years later a new opera company, the Lyric Theatre of Chicago, would use Bellini’s great work debuting another international diva to launch itself upon the world music scene.

On November 1, 1954, the new company’s three-week season opened with Callas making her American debut at the theater on North Wacker Drive. 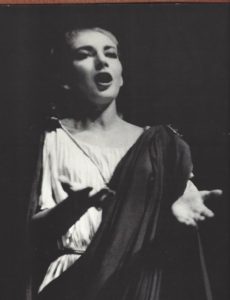 The new company had won Ms. Callas by offering her twice the fee the Met was willing to pay, and added a very generous benefits package. Ms. Callas wanted her debut to be impressive (she rehearsed the daunting “Casta diva” nine times in rehearsal) and it was.

Historian Davis captures some of the excitement:

On November 1, the three-week season opened with Norma, featuring Simionato, Rossi-Lemeni, and Mirto Picchi. Rescigno conducted. The Civic Opera House, just shy of capacity, “blazed with an electricity that had not been felt since Samuel Insull opened it in 1929.” As the Tribune reported it, “Diamonds, real or ersatz, sparkled; white mink jos­tled white ermine and white fox; jewel toned frocks gleamed against men’s dinner jackets. And there were many young pretty faces.” There were some familiar faces too, among them Giorgio Polacco, Rosa Raisa, Eva Turner, Giovanni Martinelli, and Edith Mason. “We have now what we need,” Miss Mason told reporters, “youth and enthusiasm.”[i]

On stage was a Norma that surpassed even the wildest hopes, worthy of anything the city had heard in its golden age. Said Claudia Cassidy, “This would have been an extraordinary performance in any opera house. It was serenely, handsomely staged, its musical pulse was so warmly se­cure you could quickly take it for granted, and it was magnificently sung.” Callas proved not only a remarkable singer, but a formidable actress as well. “She molds a line as deftly as she tosses off cruelly difficult ornamentations in the highest register,” Musical America reported. “And she brings to everything a passion, a profile of character and a youthful beauty that are rare in our lyric theater.” Rene Devries, writing for Musical Courier, said Callas “guides her voice as a great cellist uses his instrument to achieve a fine legato, and reaches high C’s with noble simplicity and astounding effects.” “For my money,” Cassidy concluded, “she was not only up to specifications, she surpassed them. So did Giulietta Simionato, the Adalgisa, who with her made the great duet, `Mira, 0 Norma,’ something to tell your grandchildren about. As for Rossi-Lemeni … his Arch-Druid had the magnificence of Michelangelo’s Moses.” “It was a great night for Chicago,” Musical America proclaimed. “It may prove an even greater night for opera in America.” And the Chicago Sun-Times said, “Once more this city has raised an operatic voice which deserves to be heard around the world.”[ii]

Even the queen of Chicago opera, eighty-year-old Mary Garden, attested to Callas’ triumph: “There’s not been anything like this since I was up there…She is a great actress, she is a great singer.”

Omne trium perfectum, “the rule of three”, maintains that things that come in threes are inherently better – more satisfying, or effective- than any other number of things.

The rule’s truth is now on full display with the current Lyric Opera production of Norma:

The role has all that was ever known about writing for the coloratura soprano magnified into terms of the dramatic soprano, it has melodies of the purest bel canto, broad declamation, a range extending from middle C to high D, and all spread over four acts of opera. It also calls for a singer of dignified, commanding figure.”[iii]

Ms. Radvanovsky, like Ms. Raisa and Ms. Callas, performs it all so effortlessly so as to belie Callas’ confession that “no fee is high enough for singing that role.” Radvanovsky’s Norma was billed as the finest of our generation. It may just be even better than that. 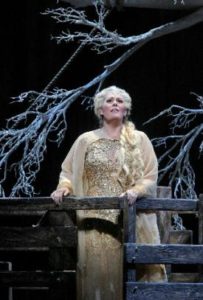 Ms. Radvanovsky’s Norma is met full on by an exquisite Elizabeth DeShong as Adalgisa. Their Act Two duet is radiant. Likewise, Russell Thomas’ Pollione grows stronger as the situational vice tightens around him. As usual, the Lyric chorus shines, especially as the Act Two Gallic warriors awaiting battle.

Mr. Newbury’s interpretation is clearly non-traditional and at times the fine performances are lost in the director’s enigmatic choices. Nevertheless, Riccardo Frizza’s passionate conducting and Duane Schuler’s beautifully detailed lighting (he even reveals a visual counterpoint to the sound waves emanating from a struck gong) keeps the singers as the center of attention amid director Newbury’s diffuse movement of actors and groupings of singers.

Judge not, that ye be not judged.

For with what judgment ye judge, ye shall be judged: and with what measure ye mete, it shall be measured to you again.

And why beholdest thou the mote that is in thy brother’s eye, but considerest not the beam that is in thine own eye?

Ms. Radvanovsky’s interpretation of the role seems to mirror that of Callas,

Maybe Norma is something like my own character. The grumbling woman who is too proud to show her real feelings and proves at the end exactly what she is. She is a woman who cannot be nasty or unjust in a situation for which she herself is fundamentally to blame.

A Norma like Sondra Radvanovsky arrives every fifty years or so. You will not hear singing like this anywhere else.