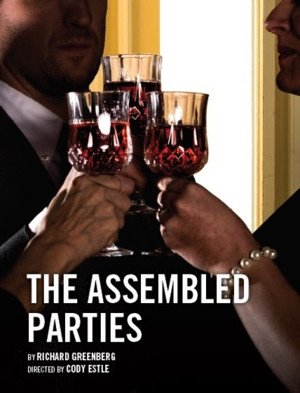 Christmas has been the occasion for two classic plays, Hamlet and Ibsen’s Doll’s House.

Ironically, as the Christian Feast of the Nativity has become secularized, the occasion has been used by more and more contemporary playwrights to give dramatic resonance to their work.

Greenberg’s play is perhaps the most remarkable because it is set among God’s Chosen People, the Jews, for whom the Savior had been promised so long ago, and who now celebrate Christmas, not as “Christ’s Mass or Liturgy”, but along with the rest of the secular world as a time to gather family and friends for “Season’s Greetings.”

Julie Bascow (Loretta Rezos) is the Jewish matriarch of the play who has decided to create a holiday Christmas celebration with tree, gifts, and family feasting. Greenberg’s play presents two of her celebrations, each about a generation apart. Act I occurs in 1980 with Julie’s husband Ben (Joe Mack), her college age son Scott (Niko Kourtis), elementary school age son Timmy (Leo Sharkey), Scott’s high school friend Jeff Bornstein (Christopher Peltier) and Ben’s sister (JoAnn Montemurro) Faye’s family, husband Mort Rappaport (Chuck Spencer) and their daughter Shelley (Marika Mashburn). It is the time of the onset of AIDS and the audience can see now what was unseen then. Act Two is twenty years later, on the cusp of a new Millennium. Both Ben and Mort are gone. Scott has died of AIDS. Faye and Jeff have come to mark the occasion with Julie, whose life is in the last phase of a terminal disease. (Prophetically, at the very beginning of Act I, Julie had said “It’s so lovely Christmas. Though you find that all the dying tends to accelerate around now.”)

At the end of Act I Julie declares her position on God, religion and faith

God is bogus and religion a scourge.

I believe in something. Though I’m not sure what.

And nothing is more human than to yearn….

The holiness of shiny surfaces

All mystery – what will be? What will become of you?…

And, yes, I think this will round out the toast

Or whatever this is

Does everybody know what that means?

I am in agreement.

Isn’t that a lovely thought?

There are times I want to say amen to everybody –

Because I feel it is the case here among us

And then we can eat

All right/ Count of three?

Julie; Now we can eat!

With that prayer of disenchantment Act I ends, and twenty years pass before the action resumes.

Orthodox Christian priest Stephen Freeman has spoken of the attitude of disenchantment,

“A very apt word for the world we live in is: disenchanted. It was first used by Max Weber and a number of others to describe a certain aspect of the modern world – the absence of the sacred. Where people of earlier eras and other cultures have experienced the world around them as charged with divine power (of various sorts), we simply experience the world as inert. There is nothing there.

The disenchanted world is doubtless a major source of modern atheism. When someone says they do not believe in God, they are quite likely simply relaying accurately how they perceive the world – that the world they see is simply disenchanted.

The failure of wonder hardens the heart destroying our capacity for giving thanks. Fr. Alexander Schmemann said, “Anyone capable of giving thanks is capable of salvation.”… And it is the wondrous, sustaining grace of God that is the ground of all thanksgiving.”[i]

Of old Habakkuk, the Prophet was counted worthy

To behold ineffably the figure and symbol of Christ’s birth,

And he fortold in song the renewal of mankind.

For a young babe…has now come…

Unto the renewal of the peoples.

O ye people that before were sunk in corruption, But now have escaped wholly from the perdition of the adversary,

Lift up your hands and clap them in songs of praise,

Who in His compassion is come into our midst.”[iii]

Since Julie prays, there is hope compassion will come into her midst.

Julie, the Act I prophetess, has, by God,  been counted worthy to behold a Christ-like figure enter her world. Like a symbol of Christ, the sixteen-day old baby of Timmy (now played by Nick Kourtis) and his absent girlfriend Molly, given the name of Scott, promises to renew the broken people sunk in the world’s corruption.

Even Faye senses the significance:

Even Jeff, because of the new born child, has found a place in the new world the child creates. Jeff will be this family’s “charges d’affaires.”, as Faye calls him.

In fact, Jeff Bornstein becomes to this assembled family what Scrooge becomes to the Cratchit family at the end of A Christmas Carol:

“I’ll raise your salary, and endeavour to assist your struggling family”…Scrooge was better than his word. He did it all, and infinitely more; and to Tiny Tim, who did not die, he was a second father.” [iii]

As she did at the end of Act I, Julie offers a concluding reflection, revealing how she has changed in the course of the action:

“I’ve never believed in God and I’m certainly not going to start now.

But it is so hard to resist thinking that some things are portents, do you know? Symbols?

What a beautiful Christmas this has turned out to be.

As Julie prepares to conclude her life, Scott, the precious newborn baby begins his life. Christ ‘s symbolic incarnation has transformed these lives. Christmas is indeed the feast of beginnings and endings.

“Christmas, as the feast which celebrates the incarnation of Christ (as does the Annunciation), is the feast of the beginning of all things, and the feast of the end of all things. It is both cause and the end of all effects. And thus we will have a “big” Christmas this year, for the gift that is given us is nothing less than creation itself. Its price was nothing less than the life of God. It’s not the economy, in the way politicians think of economy. It is the oikonomia – the unrelenting love of God completing what He alone could begin and what He alone could finish.”[iv]

Julie’s journey has demonstrated the truth of the Jewish/Christian philosopher Simone Weil:

” It seemed to me certain, and I still think so today, that one can never wrestle enough with God if one does so out of pure regard for the truth. Christ likes us to prefer truth to him because, before being Christ, he is truth. If one turns aside from him to go toward the truth, one will not go far before falling into his arms”[v]

The Raven Theatre has provided many of Chicago’s most memorable theater-going experiences.  And Assembled Parties continues that long record.

Director Cody Estle always seems to assemble just the right group of actors, each one perfect for the role. Under his hand there is not a false beat or a dull moment. Loretta Rezos is a Donna Reed actress – pretty, poised, compelling, varied in emotion, rich in subtext. Nick Kourtis plays both brothers with deft difference and stunning conviction. Jo Mack’s Ben clearly is a troubled man, with touching hints in the performance to suggest the sources. Marika Mashburn is heartbreaking as Shelly, the daughter no one wanted, and the guest no one invited. JoAnn Montemurro’s Faye is yet another of the actress’s amazing incarnations – a bold character, played with compelling depth, nuance, humor, pain, and ferocity. Christopher Peltier plays Jeff as the eternal odd man out, measured, mild, correct, dependable, but ultimately alone. Chuck Spencer’s Mort, the polar opposite from the rabbi he played in Tim Gregory’s Jacob, conveys the requisite brutishness hidden by the cordiality required by family party manners.

When a director works with a favorite designer, the result is usually extraordinary. The team can speak code and use an accumulated catalogue of visual references to make their communication sync. This is clearly the case with the dynamic duo of Estle – Kmiec: (Dividing the Estate, The Seagull, A Loss of Roses). The design team working with Mr. Kmiec is first rate as well. Theresa Ham’s costumes are not only appropriate to time and place, but reveal character through color and line and fabric.  Nick Belley’s lighting design accomplishes a formidable task with seeming ease.  John Buranosky’s properties and set dressings go a long way to communicate the change in fortune in the families over time. Tara Malpass’s hair and makeup, together with the very fine acting, move the characters through time in a believable and moving manner.

Put Assembled Parties on your “Must See” list, and don’t lose it!

[iii] Charles Dickens, A Christmas Carol, Stave Five: “The End of It”.

[iv] Stephen Freeman, “How Big is Your Christmas?” http://blogs.ancientfaith.com/glory2godforallthings/2014/12/23/big-christmas/