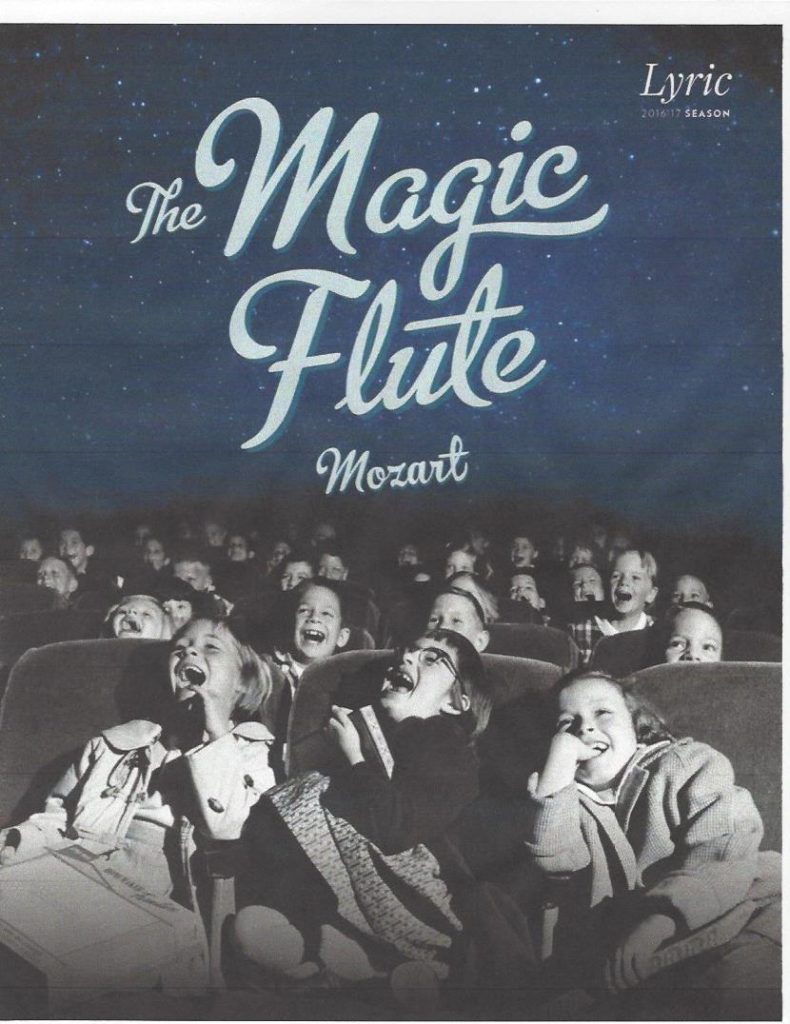 Reviewing an 1879 production of Mozart’s The Magic Flute, the anonymous Chicago Tribune critic noted, “it would be absurd to try to explain the plot…. All sorts of explanations have been attempted but, if anyone ever really knew what it meant, he died before he said anything about it. It is a hodge-podge, nonsense, and triviality, grandeur and even sublimity.”

Since then the world’s Mozart experts have agreed:

The libretto to the Magic Flute is considered such a jumble of nonsense that it is as well to endeavor to extract some sense from it.”[i]

One of the most absurd specimens of that form of literature in which absurdity is regarded as a matter of course.”[ii]

Nevertheless, since its first presentation in Chicago on January 17, 1865 at McVicker’s Theater by Groven’s Opera Company with Mr. Graf (“at the head of his profession”) as Papageno, and Mme. Johannsen (“whose vocal powers are already known to Chicago concert-goers of ten years ago,”) as the Queen of the Night, the opera has been regularly revived to the delight of Chicagoans.

Chicago’s Auditorium Theater hosted the Metropolitan Grand Opera Company’s Magic Flute on April 3, 1902 with Walter Damrosch conducting Marcella Sembrich as the Queen of the Night to “sing with a bravour and brilliancy such as no other singer now or before could bring”, Johanna Gadski as “a Pamina beautiful to look upon and delightful to hear”. However, Andreas Dippel’s “tones of the upper register were misplaced” as Tamino, and Giuseppe Campanari’s “tongue seemed a bit lacking in lightness” as Papageno, a cast “entailing an expense of nearly $10,000, and was listened to by an audience that crowded the Auditorium to the last available standing place, and that represented close on $15,000 at the box office.”

A year later, Ms. Sembrich’s “nose was put out of joint” during another production of the Magic Flute at the Auditorium when the 5,000 people in the audience demanded little American soprano Fritzi Scheff, Pagagena, and Campanini, Papageno, reprise their final duet. Ms. Sembrich tried to sing over the reprise, but the audience hissed her off the stage. She never returned and the final ensemble had to be cut.

It was a quarter of a century before Mozart’s comic opera re-appeared in Chicago, this time on October 31, 1931 at the new Civic Opera House. (Taking no chances, the singer of Papagena, Helen Freund, was not listed in the press release.) The Tribune critic found the production “fascinating vocally and again scenically.”  Scottish soprano Noel Eadie debuted as the Queen of the Night. Critic Moore concluded, ‘not for a long time has there been such coloratura singing here abouts.”

Lines wrapped around the block as customers sought tickets for the Metropolitan Opera’s 1943 Magic Flute at the Civic Opera House. Bruno Walter, one of the world’s most celebrated conductors, led the production of one of the first English language translations, directed by Herbert Graf. Ezio Pinza was, according to the Tribune’s Claudia Cassidy, “a magnificent Sorastro.” Australian John Brownlee’s Papageno was” ludicrous yet engaging.”

Three years later WGN’s Chicago Theater of the Air broadcast a one hour version of the increasingly popular Magic Flute. So popular had the opera become that the Children’s Opera Guild used the opera to teach the art to youngsters Friday afternoons at the Chase Park Fieldhouse.

The Lyric Opera offered its first Magic Flute in 1966 and it failed to impress. Audiences reportedly left before the end, tired of waiting during interminable set changes. Herbert Graf directed a production so darkly lit that it, according to Thomas Willis of the Trib, “made you listen to the music.”

In 1986 the Lyric Opera presented August Everding’s production, conducted by Leonard Slatkin and designed by Jorg Zimmermann,  set in a fairy tale rock garden presided over by the Queen of the Night with lighting by Duane Schuler. This time there were quick scene changes and symbolic references to Mozart’s Masonry. John von Rein declared, “Rarely has the Lyric made Mozart so enjoyable and entertaining for a general audience, and rarely has the opera season begun in so buoyantly lovable a fashion.”

In 1995 the Chicago Opera Theater offered Mozart’s opera in English with a 35-piece orchestra conducted by Lawrence Rapchak at the Merle Reskin Theatre. The production featured the operatic directing debut of Mary Zimmerman. The Tribune’s John von Rhein called it “a tasteful, sometimes charming, Flute”.

Bergman’s film opens with a close up of a little girl in the audience rapt in Mozart’s hypnotic overture. Other faces soon fill the screen, only to end with a shot of the huge production act drop. Tamino sings as the footlights cast harsh lights upward to the singer’s face, reminding all that we are, and will always be, in a theater. In fact, we first meet Papageno backstage, almost missing his entrance. He scurries past two stage hands to enter just in the nick of time.

Bergman created a piece of metatheater –  a film about theater – backstage, onstage, and in the audience –  being made while the audience responded. By placing his stage opera in a similar metatheatrical frame, director Armfield claims his production’s spot among the world’s great plays-within-a play: Hamlet, The Seagull, Six Characters in Search of an Author, The Caucasian Chalk Circle, Marat/Sade, and Noises Off.

Set in the late 1950s or early 1960s, Mr. Armfield presents a group of neighborhood kids putting on their own amateur production of Mozart’s Magic Flute. In this framework, Mozart’s story absurdities become endearing. The parents bring covered dishes for the after picnic and lawn chairs from which to watch their kids’ performance, which takes place both inside and outside the ever-moving post-war suburban home.

As the play progresses, the children’s innocent joy and love for what they are doing seem to magically channel fairy tale heroes to the house to play the lead roles. Since it was re-released in 1952, Walt Disney’s 1937 Snow White and the Seven Dwarfs is the more than appropriate source for the mythic heroes. Tamino (heroically sincere Andrew Staples) arrives as the Prince, Pamina (the sweet Christine Karg) as Snow White herself, the Queen of the Night (the radiant Kathryn Lewek)  becomes The Evil Queen, while the disguised Papagena (the dynamic Diana Newman), resembles no one more than Disney’s witch.

Papageno (the masterful Adam Plachetka), on the other hand, wanders in from the comedia del arte’s  zanni, comic servants, which populated medieval and Renaissance Europe. In Germany, the fellow was known as Hanswurst, a Teutonic baggy pants comedian, akin to the late great American Bert Lahr, representing a comic Everyman, in over his knuckled head. A pot-bellied country bumpkin, Hanswurt, like Papageno, got into idiotic situations, was always hungry, always afraid, and always on the verge of tears. In the twentieth century he would become Jaroslav Hasek’s Good Soldier Svejk.

Playwright Emanuel Schikaneder directed himself to dominate the action in the role of Pagapeno. All subsequent productions of Mr. Schikaneder’s play must have a strong Papageno to hope to succeed. And the Lyric production has a dandy of a Papageno. The great Czech baritone Adam Plachetka seems vocally freer, and even more delightfully witty, as Papageno than he did as last season’s Figaro.  He is a total joy to watch and hear.

While Bergman had his Fanny and Alexander, Armfield has his own children (Lucas Vergara as a young Neil Armfield, Hudson Ford, KyLee Hennes, Meguire Henner, and Lev Kaplan) to manipulate the scenery, properties, and special effects, as well as play some roles, such as the Three hobby-horse riding Genji (Casey Lyons, Parker, Scribner, and Asher Alcantara). Ann Toomey, Annie Rosen, and Lauren Decker find every last ounce of musical theatricality as the Queen of the Night’s girl group back-up singers

This production’s bizarre Temple of Wisdom and Sarastro’s (the great Christian Fischesser) odd men-only fraternity, is clearly derived from the television sitcoms of the period, which featured a host of crazy fraternal orders – The Benevolent Order of the Bison Lodge[iii], The Raccoons[iv] The Royal Order of the Mystic Nile Lodge[v], and the Fez-wearing Seals[vi], not to mention episode 65 of Amos and Andy: “The Mystic Knights of the Sea”, and the “He-Man Woman-Haters Club” founded by Spanky in a 1934 Little Rascals’ Our Gang episode which aired on television throughout the 1950s and 1960s.

The production is visually, theatrically, and vocally thrilling; a wonderful production concept meets some of the greatest of modern Mozart voices, led wonderfully by conductor Rory Macdonald.

Christine Karg (Pamina) and Andrew Staples (Tamino) could not be better. And Kathryn Lewek’s Queen of the Night is alone worth the price of admission. After Mime in Das Reingold, Rodell Rosel shows another aspect of evil as an effective Monostatos. There is not a weak link anywhere in this lovable production presented with great loving attention to detail.

The words used by the New York Times’ Vincent Canby to describe Bergman’s cinematic triumph apply equally to the theatrical achievement of Mr. Armfield and his collaborators. The Lyric Opera’s Magic Flute

Is an absolutely dazzling entertainment, so full of beauty, intelligence, wit, and fun that it becomes a testimonial not only to man’s possibilities but also to his high spirits… Make no mistake: This Magic Flute is no uneasy cross-breed of art forms. It’s a triumph in its own right”

[iii] The Many Loves of Dobie Gillis