The Irish Theatre of Chicago’s THE WEIR: “A strange [but wonderful] little evening” 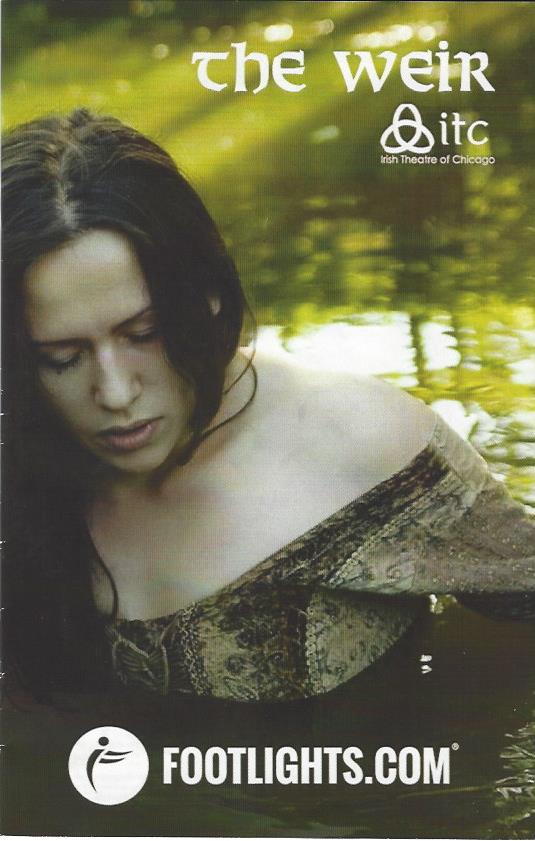 When I lived on a five-acre farm in Maine, I found myself strangely fascinated with the behavior of male birds. It seemed that whenever a female swallow appeared the male swallows engaged in all sorts of madcap aerial displays, loop-d-loops, dives, deal falls, etc. On the other hand, when a female cowbird appeared, the male cowbirds paired off as if in the concluding scene of High Noon, strutting toward one another, stretching their necks to be able to look down their beak at the other.

All the while the visiting female birds sat bemused.

I thought of these birds as I watched the Irish Theatre of Chicago’s magnificent production of Conor McPherson’s The Weir.

I also thought of another play which answers the Passover Question of play analysis – “How is this night unlike any other?” – the same way:

This night a strange woman enters a room of male friends.

The other play is Harold Pinter’s starkly violent play, The Homecoming.

The entrance of the woman in each play causes the men to act in uncharacteristic ways, like my male birds.

Unlike the London men of Pinter’s play, the men of the Weir, because they are Irish, react by telling tales, “weird” tales of times when the dam, or “weir,” separating their visible world from their invisible world seemed to become porous.

Conor McPherson enjoys dramatizing such moments in his remarkable body of work, as evidenced in Steppenwolf’s wonderful A Night Alive.

McPherson’s rural bar is populated with the regular locals. Jack (Brad Armacost) the luck-dependent local handyman who has been haunted by the love of his life who got away. Jack begins the night of narratives by agreeing to Finbar’s request to tell the tale of the fairies. Brendan (Bradley Grant Smith) the barkeep who oils the poetic tale-telling tongues. Jim (Jeff Christian), the analytical shy bar keep contributes a tale of digging a grave with Declan on a rainy night. Finbar himself (Dan Waller) tells of a woman on stairs at the Walshes’ house. Even Valerie (Sarah Wellington) speaks the story of events leading her to Sligo. The evening concludes with Jack’s tale of love lost, but redemption achieved, as he received an almost Eucharistic sandwich – “It fortified me like no other meal in my life” in an anonymous pub on the road just outside Phibsboro.

The situation, the characters, the stories, and the language create a magical evening for those both onstage and in the Den audience.  If 75% of directing well is casting well, Siiri Scott dis a masterful job directing the play. Each performance is true, genuine, appropriate, riveting, and perfectly singular.

Two performances stand out as the brightest among the stars. Brad Armacost’s Jack is the first performance I’ve seen him give since I saw his C.S. Lewis in the Provision Theater’s C.S. Lewis On Stage. Of that performance, I wrote, ”Only about a half dozen times in over half a century of playgoing have I stopped myself after only a few moments of watching an actor’s performance to think,” I believe this man can do anything.” Mr. Armacost is so at ease on stage; so, comfortable with who he is; so, grateful to have an opportunity to share (commune) with this audience; and seemingly so possessed of a mind, body, soul and spirit capable of leading us to wherever he chooses – it is a privilege to be in his audience. (And these qualities were not those evident in C.S. Lewis himself, so one can’t attribute Mr. Armacost’s success to” acting”.)

McPherson’s Jack could not be more different than C.S. Lewis. Mr. Armacost proves my conclusion doubly in The Weir. (As an aside, certainly some director or company, looking for a sure-fire hit, will soon cast this treasure of an actor as captain Jack Boyle in O’Casey’s Juno and the Paycock?!?)

The other performance is Sarah Wellington’s Valerie. When reading Valerie’s speeches in McPherson’s text one imagines the histrionics young actors could find in delivering her life-revealing monologue. Ms. Wellington’s performance is breathtaking in its restraint, gorgeous in its nuance, and regal to behold. When she speaks, she dominates a stage full of some of Chicago’s most effective listeners!

And the dialects in the play are superb. Ms. Wellington’s educated Dublin sound is clearly not the rural sounds of the men of the West. Certainly, Eva Breneman, who coached Chicago Shakespeare’s King Charles III’s voices to great success, must share at least a portion of the credit here.

A finer evening in the theater could not be had. I doubt the Abbey Theatre itself could mount a finer production of Conor McPherson’s The Weir. As Jack says near his exit, “This has been a strange little evening for me.”

And wonderful. For all of us.