Lyric Opera’s DON QUICHOTTE: A Hymn to a Holy Fool 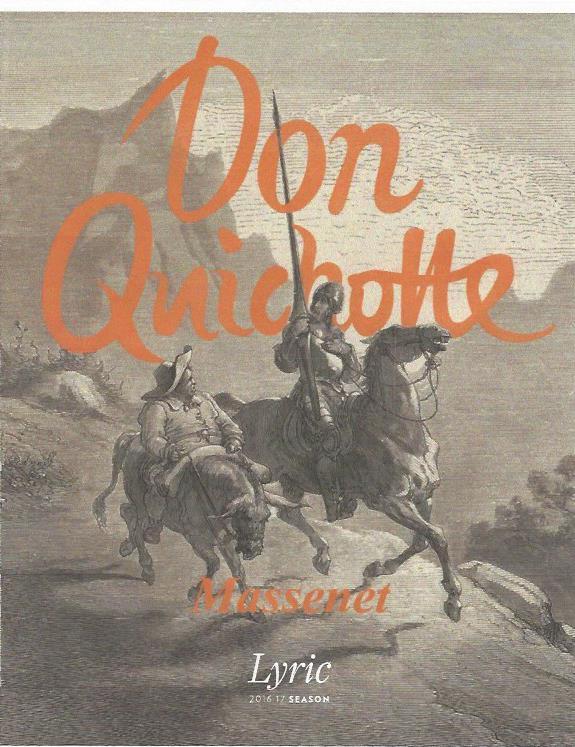 A dying Jules Massenet wrote Don Quichotte knowing the woman he loved, soprano Lucy Arbell, would play the courtesan-lady Dulcinee after his death.

Rather than create his own libretto from Cervantes’ mammoth novel, Massenet used Jacques Lorrain’s bastardized and abridged verse play, Le Chevalier de la longue figure, for his libretto. La Lorrain’s short play focuses on but a few episodes in the career of the Knight of the Woeful Countenance, and eliminates the double identity of Dulcinee. She is, in Massenet’s opera, a lady, not a barroom prostitute named Aldonza who appears as a Lady only to the eyes of the Don.

Massenet’s hero resembles nothing more than a Holy Fool:

The fool for Christ, who can still be discovered in contemporary literature and films, is someone who has broken away from society. To withdraw into such religious folly is effectively dropping out of mainstream life. It truly is a departure, because a person who chose this path usually left his home region for places where no one knew him.  We only know of men for the most part, who ‘died for the world.’ Arriving in strange lands, the fool for Christ did not join his new community. The fool for Christ is not merely an eccentric. In its highest manifestation, yurodstvo [holy-fool-ness] is a kind of sanctity, but one that shuns any recognition and to this end dons a grotesque mask. It may indeed comprise eccentricity, but this is superficial. It was said of one such man who ‘by day he laughed at the world, but wept for it by night’.” [i]

Miguel di Unamuno called him “Our Lord Don Quizote [sp] whose madness comes from a faith in what Kafka was to name ‘indestructibility,’…His madness is a crusade against death.” [ii]

Whither goest thou? What is thy mission?”

The True Knight-Errant, sirs, am I,

Who guards the good, and rights the wrong;

A wanderer whose heart o’erflows with tenderness

For the mother that mourns, the poor, weak and oppressed.

For all whom fate denies the precious boon of love.

To smite and scourge the profligate,

And heal the suffering,

with love and tenderness!

I was the prince of kindly men!

I strove to right the wrong,

I fought for truth and honour!”

He is hailed as

This brave man, true and honest. Great in heart and in soul. Laugh on, and mock this poor champion of chimeras Whose thoughts are noble dreams, and whose speech is an idyll/ Of tenderness and love inspired by source divine!”

When facing a torturous death, the Don prays,

O Lord, receive my spirit, not wholly vile or worthless, /

For my heart is the heart of one faithful to Thee;

Deal Thou kindly with me, do Thou judge me in mercy/

Since I do stand for truth and right, I stand for Thee!

The opera premiered in 1910 in Monte Carlo with Fedor Chaliapin, for whom the role was written, as the Don.

The Chicago premiere occurred on January 27, 1914 at Auditorium Theatre with Emile Vanni-Marcoux, who was the Don preferred by Massenet, (he had premiered the role in Paris), and Mary Garden appearing as Dulcinee. “Vanni Marcoux was tall and lank and turned the role of the Don into a personal tour de force. Mary Garden meanwhile surprised even her most ardent admirers by singing a difficult coloratura role divinely. ‘Her song disclosed unexpected elements of brilliancy ‘, wrote the Tribune, “it cascaded through dazzling cadenzas of coloratura, trilled and fluted in the canzonetta, which she sings to the accompaniment of her guitar; and the scene wherein Dulcinee discloses her true nature to the Don, it expanded to include every interpretive resource of the lieder singer, to discover elements of refinement and of beauty rarely heard in opera.”[iii]

In 1929 Don Quichotte played at the new Civic Opera House’s inaugural season starring Marcoux with Coe Glade as Dulcinee. Critic Edward Moore found Marcoux “a marvel in this character. He looks to be about seven feet tall, with a thinness in inverse ratio to his inches, and one can almost hear his joints creak as he moves…. Mr. Marcoux, however, was not the whole show. There was Miss Glade, a personality and a voice, if ever one appeared in opera. A bit more come-hitherish than is even her normal custom – to be sure the part called for it – there was flame in her singing and her manner. And she is uncommonly restful to the optic nerves.”

In 1974 and again in 1981 the Bulgarian bass Nicholai Ghiaurov presented the Don to Chicago audiences. The 1974 production was to have been directed by Peter Ustinov, but he withdrew leaving the production to the great bass Italo Tajo. The French conductor had the production well in hand. Critic Thomas Willis found the Bulgarian bass’s acting “a match for his singing, for he builds each visual climax by the precise and economical use of vivid stylized gestures. By the final death scene Friday night, even the long intermissions could not blunt the sustained force of his characterization… Ghiaurov’s Don catches both the childlike simplicity and the Cyrano playfulness of Cervantes’ creation, and the way he melts at the sight or sound of Dulcinee must be witnessed to be believed. However, the Tribune’s John von Rhein was bowled over by Lucia Valentine-Terrani’s Dulcinee, “who was, in a word, sensational. She combines a voluptuous figure, a gracefully seductive manner, and an ample mezzo-soprano that can pour out lustrous sound whether in coloratura flight or lyrical expansion.”

1993 found the incomparable bass Samuel Ramey for nine sold out performances at the Civic Opera House. Susanne Mentzer was Dulcinee and Jean-Phillippe Lafant Sancho Panza. The Tribune’s John van Rhein thought Ramey “lacked the sad, otherworldly dignity, the self-deluding bravado, that Ghiaurov brought to the to the role. Lyric’s new Man of La Mancha was more a regular guy with an eccentric streak, clinging stubbornly to his belief in mankind’s essential goodness.”

The endurance of Don Quichotte in the opera repertory owes as much to the fortunate original performance by Fedor Chaliapin as to Massenet’s rather thin libretto and score. The New York Herald Tribune critic noted, “this extraordinary artist has gone beyond Massenet. He has gone, evidently, to the figure of the nobly fanatical dreamer as he exists for all of us in Cervantes, and has recreated him almost in defiance of the shabby trio who defaced a masterpiece. In Chaliapin, the true Don Quixote comes alive across the footlights.”[iv]

Known as a pioneer, along with Chicago’s Mary Garden, in moving operatic performance from costumed concert to psychological, vocal, and physical characterization, Chaliapin inspired the great Constantin Stanislavski to apply Chaliapin’s approach to characterization to stage dramas. In fact, Stanislavski admitted, “my system is taken straight from Chaliapin.”

After reading Cervantes attentively, I close my eyes and form an idea, I can get the general impression of Don Quixote. I can, for instance, understand that this introverted dreamer must be slow in his movements, he must not be agitated. I understand that his eyes must not be cold and sober. It is clear that his appearance must suggest at the same time imagination, helplessness, childish weakness, the pride of a Knight of Castile, and the goodness of a saint. Don Quixote’s inner nature made me see his external aspect. I pictured it in my mind and, feature by feature, I steadily continued to model his image, which from a distance produced a great effect but was comical and touching when near.”[v]

Ever since Chaliapin’s historic performance, Don Quichotte has required a master singer-actor who can bring to both the process of creation and the demands of performance what the Russian master brought almost a century ago. (Thankfully, some of Chaliapin’s magnificent work has been preserved in Pabst’s 1933 film.)

Fortunately, Ferruccio Furlanetto is the Chaliapinesque Quixote for our generation.

His Don Quixote does not present the tragic-comic figure of Cervantes’ knight but a being completely infused with ideals of humanity and justice, an apostle of love and good. Hence the very convincing nature of his performance as he overpowers the robbers and pours scorn on Dulcinee’s suitors. This enthusiasm for an ideal is the core of Chaliapin’s [and Furlanetto’s] hero, whether he expresses it in song, words or acting. His Don Quixote is a figure totally consumed by this idee fixe, down to the last quiver of his nerves, and this has a compellingly powerful effect on spectators. Every detail of the character, every intonation, every gesture – even a movement of the fingers – is in perfect harmony with the psychological conception.”[vi]

This production of Don Quichotte originated with the San Diego Opera in 2009, directed by Ian Campbell, scenic design by Ralph Funicello, costumes by Missy West, and lighting designs by Marie Barrett. In 2014 The opera was restaged by Keturah Stickman, again utilizing the scenic design of Ralph Funicello and Missy West’s cheerful costumes. The Civic Opera House hosts the San Diego Opera’s settings and costumes, with Matthew Osawa directing the stage action.

Sire Andrew Davis enthusiastically and lovingly conducts the Massenet score. Particularly moving was the Prelude to Act V, featuring the exquisite cellos led by principal cellist Mark Brandfonbrener. Michael Black’s chorus sings so well one doesn’t want them to stop. The French mezzo-soprano Clementine Margaine presents Dulcinee ‘s important change of heart toward the Don with sensitivity, grace, and a strong voice, while Nicola Alaimo, equal with comedy and drama, delights as the comic sidekick, Sancho Panzo. Bradley Smoak displays his versatility with a swashbuckling Bandit Chief, a far cry from his haunting portrayal of Hector’s Ghost in The Trojans.

Gerardus van der Leeuw called opera “a miracle which is granted us in spite of all human possibilities and impossibilities. The miracle of a new world, the blurring of contours, the fading away of colors, which are returned to us by the grace of God in a part of the great miracle through which God takes us all, only to return us renewed in even greater glory.”[vii]

The impossibilities are laid forth thoroughly enough, beginning with the eternal conflict between words and music, to the bad temper of the prima donna. But the most tragic and glorious impossibility lies in the fact that the creation, which cannot be, is nevertheless present in the opera, that the form which vanishes blossoms again before our eyes. Every great opera dashes life to pieces, destroys it without mercy. Events are drowned in the current of music; characters disappear in a modulation; emotion becomes ‘feeling in general’, that is, lack of feeling. But from the ruins of our life arises a new world.”[viii]

In Massenet’s powerful opera the holy fool may die, but from the ruins of his life the possibility of a new world arises.

Not sentimental by any means, Chaliapin confessed, in  Pages from My Life, his reaction to hearing the score for the first time ,

By the time [Massenet] had reached the beginning of the last act I was sobbing so hard that Massanet stopped playing, looked at me and explained, ‘Chaliapin, please, please! Calme-toi! Control yourself! Let me finish!”

Over a hundred years later, the opera can, when led by a master like Ferruccio Furlanetto, still wrench the heart.

Like Loading...
December 8, 2016 – 10:12 am | By Paul Kuritz | Posted in Books, from Paul, History, Men and Women, Music, Opera, Poetry, Quotations, The Gospel of the Kingdom, Theater, Theology | Comments Off on Lyric Opera’s DON QUICHOTTE: A Hymn to a Holy Fool