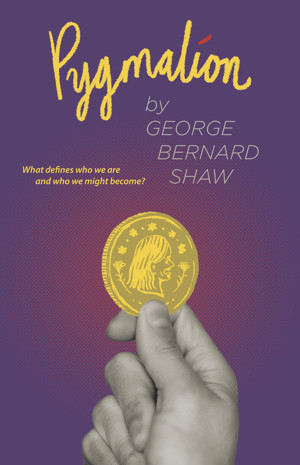 If you think you might ever want to see Bernard Shaw’s famous comedy, Pygmalion, now is the time.

Head to the Remy Bumppo Theatre.

You won’t find a better collection of actors finding every jot and tittle of comedy and drama in this sometimes-baffling play.

Bernard Shaw’s Pygmalion is a peculiar example of a modern play based on a classical myth.

In Ovid’s tale, Pygmalion is a sculptor who falls in love with a statue he has created, Galatea. Venus brings the statue to life so that Pygmalion and Galatea may marry and live happily ever after.

In Shaw’s telling the creator does not marry and live happily ever after with his creation, Eliza Doolittle, even though Eliza seems interested in the possibility.

It seems Mr. Shaw had a more pressing matter to resolve with his play, Pygmalion.

Pygmalion can be seen as the slightly fictionalized story of Shaw’s mother, Lucinda Elizabeth Shaw, and her live-in guru/lover, the renowned voice teacher George Vandeleur Lee. Young Bernard was raised in the ménage à trois of mother, George Vandeleur Lee, and his “father” George Carr Shaw. Throughout his life, Shaw was plagued by questions of his paternity. Though he publicly pooh-poohed the subject, the matter relentlessly infuses most of his plays. In fact, the character of Eliza Doolittle is as uncertain of her parentage as Shaw himself.

Shaw wrote Pygmalion to demonstrate once and for all how a young woman, like his mother, could be educated by a dashing man, like Vandeleur Lee, without any hint of sexual activity between them. At the end of the play Eliza plans to support herself by teaching phonics, just as Shaw’s mother supported herself by giving voice lessons after being abandoned by Mr. Lee.

His childhood caused Shaw great anxiety in his dealings with married women. He struggled to keep the relationships chaste. In fact, Shaw, as the director of Pygmalion as well as its author, was embarrassed by his public infatuation with Mrs. Patrick Campbell, the original Eliza Doolittle (and Campbell is, interestingly, the name of the moving company changing the Remy Bumppo scenery), acting in his play with her husband, Sir Herbert Beerbohm Tree, the original Henry Higgins. Shortly after his mother’s death, Shaw’s rehearsal situation for Pygmalion replicated the ménage à trois of his youth.

As always, Shaw’s position on the social issues raised in the play fly in the face of his socialist-progressive friends.

A married man himself, Shaw wrote Pygmalion as a contrarian’s defense of marriage at a time when the notion of free-love was infiltrating the upper and educated classes.

In Man and Superman, the heroine is offered two similar marriage proposals.  Shaw has his New Woman, Ann Whitefield, choose the confirmed bachelor, Jack Tanner, over the silly in love “Tavvy” Robinson.

In Pygmalion, Shaw presents his heroine with two contrasting offers. From her mentor and confirmed bachelor, Henry Higgins, Eliza receives a belated offer to live outside of marriage with him and his pal Colonel Pickering. Eliza chooses, however, to accept the proposal of the hand of smitten socialite Freddy Eynsford-Hill, because it is one of marriage.

Director Shawn Douglass tries to undercut Eliza’s decision by adding a running dumb show to the play in which an aged and rueful Eliza returns to the scene of her fateful choice to wonder about the road not taken. Distracting at best, the scene is as true to Shaw as if Andrew Undershaft from Major Barbara were given a scene in which he regrets becoming a munitions manufacturer. Otherwise, Mr. Doulass displays a wonderfully nuanced mastery of not just Shaw’s play but of the intricacies of arena staging.

Plus  he has a magnificent cast with which to work.

As has, no doubt, been said before, Nick Sandys was born to play Henry Higgins. If you’ve ever wondered what that phrase means, Mr. Sandys’ glorious performance will teach you. So well does he understand the character, Mr. Sandys seems to be improvising the text as he goes along. His physical reactions to the events of the play are simultaneously surprising while all perfectly true to Shaw’s cranky character. He provides all that the text-on-page cannot. It is a must-see performance if ever there were one. For an actor with a less distinguished career than Mr. Sandys, the performance would be called “career-making.”

If, as has been said, “acting is reacting” Mr. Sandys’ triumph must be shared with the top-flight cast of actors to which he imaginatively reacts.

That cast is led by the radiant Kelsey Brennan’s Eliza Doolittle. She chooses for her character  the widest transformational arc possible. All of her choices seem designed to break through to the man she loves in vain, Henry Higgins. Her subtext could be “What I Did for Love”. Ms. Brennan is alternately hilarious and heart-breaking. What more could one hope for  from an actress? Her concluding scenes with Henry Higgins show why Shaw was an early fan of Henrik Ibsen; the playing could have been from A Doll’s House or Hedda Gabler.

The great cast doesn’t stop there. Having been a fan of David Darlow’s work at Chicago Shakespeare, I was not prepared for his role-defining characterization of Alfred P. Doolittle. His playing is a revelation of the role,  making all previous incarnations pale by comparison. Peter A Davis makes the most one can of the under-written side-kick role of Colonel Pickering. He wonderfully displays the kindness Eliza hopes can even once issue forth from Henry Higgins.  Laurie Larson’s Mrs. Pearce gives the character a presence and power usually lacking in other productions of the play. She shows how important the role is to the whole Shavian dramatic structure. Likewise, Annabel Armour’s Mrs. Higgins avoids the ball-breaking interpretations which have plagued other interpretations of the role. Her mother is amusing, frustrated, baffled, but always loving of her “character” of a son.

The beautiful functional sets by Jacqueline and Richard Penrod allow the action to flow seamlessly. The elegant costumes by Kristy Leigh Hall are as fresh and character-revealing as they should be, but also, through details,  surprisingly. suggestive of similarities and affinities among and between the characters.

Over a hundred years old, Shaw’s play may eventually lose its ability to speak to contemporary social ambition.

In the past, those who managed to escape their lowly origins usually aspired to be taken for bona fide members of the middle or upper classes by conforming their conduct to middle-class standards….The truth is that in modern Britain, the direction of cultural aspiration has reversed: for the first time in history, it is the middle and upper classes that aspire to be taken for their social inferiors, an aspiration that (in their opinion) necessitates misconduct…Body piercing began as a strictly underclass fashion, has spread widely to the popular culture industry…Middle-class girls now consider it chic to sport a tattoo—another underclass fashion, as a visit to any British prison will swiftly establish…

Diction in Britain has always been an important marker, to some extent even a determinant, of a person’s place in the social hierarchy…So it is a development worthy of remark that, for the first time in our modern history, people who would, by upbringing, use received pronunciation as a matter of course, now seek to suppress it. In other words, they are anxious not to appear intelligent, well educated, and cultured to their fellow countrymen, as if such attributes were in some way shameful or disadvantageous. Where once the aspiring might have aped the diction of their social superiors, the upper classes now ape the diction of their inferiors.

Like so many modern ills, the coarseness of spirit and behavior grows out of ideas brewed up in the academy and among intellectuals—ideas that have seeped outward and are now having their practical effect on the rest of society. The relativism that has ruled the academy for many years has now come to rule the mind of the population. The British middle class has bought the multiculti cant that, where culture is concerned, there is only difference, not better or worse. As a practical matter, that means that there is nothing to choose between good manners and bad, refinement and crudity, discernment and lack of discernment, subtlety and grossness, charm and boorishness.[i]

Perhaps a modern Moliere will attack the phenomenon with a L’École des imbéciles.

But for now Remy Bumppo’s Pygmalion is about as wonderful an evening of theater as you can find.

What a way to celebrate the company’s twentieth anniversary.

And what a testament to the power of the ancient and historic actor/manager figure (Nick Sandys for Remy Bumppo and Kathy Scambiaterra at Artistic Home Theater) to lead a theater as no other type of theater figure can.

Prepare for the Lyric Opera’s spring production of My Fair Lady by visiting the master’s original work.